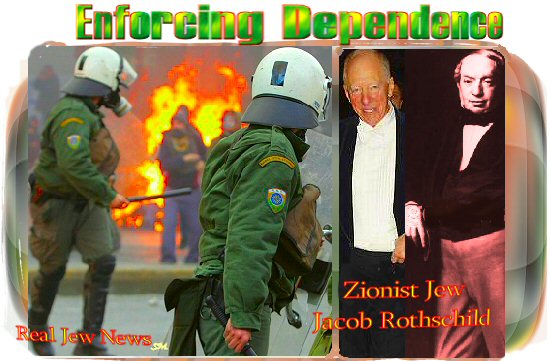 The teen’s death triggered a fierce reaction across Greece. Thousands of rioters rampaged through Athens as angry youths set the Athens Court House on fire with petrol bombs. Broken glass and burned-out wreckage were strewn throughout Athens’ streets.

The rampage intensified, when on December 19 2008, twenty masked protesters hurled Molotov cocktails at the French Cultural Institute, signaling the spread of unrest throughout Europe. The attack on the French Institute preceded scheduled demonstrations involving student groups & rallies by Greek trade unions. Multiple strikes by labor unions, teachers, doctors, and air traffic controllers have been an ongoing occurrence throughout Greece since the conflagration began.

The strikers are angry over the Karamanlis-led government’s handling of the economic crisis. The unions want higher wages and pensions & broader social spending. Greece’s two largest unions, the General Confederation of Workers & the Civil Servants Union, had already planned public demonstrations in protest of the failing economy long before the shooting of the young teenager.

The unrest that has gripped Greece these past two weeks has been spilling into the rest of Europe, raising concerns that it could be a trigger for opponents of globalization, disaffected youth, and others outraged by the economic planners of the EU. Beginning December 15, 2008, protesters in Spain, Denmark and Italy smashed shop windows, pelted police with bottles and attacked banks - while in France, cars were set ablaze outside the Greek Consulate in Bordeaux. Protesters warned about a looming “insurrection.”

In their ongoing crackdown on Internet usage, The EU’s Law Enforcement Agency, “Europol,” is leaking allegations that many of the protests were organized over the Internet. Europol points to one Website in particular which Greek protesters use to update each other on the locations of clashes. The EU’s center of operations, the Federal Republic of Germany, has just passed a controversial bill regarding the use of the Internet for ‘terrorist operations’ - a broad definition that will target civil dissenters.

Dubbed by German journalists as the “Big Brother Law” due to the bill’s provisions allowing online surveillance and personal computer confiscation, the Interior Ministry in Berlin defends it as a necessary step to “protect” the country from the dangers of international terrorism.

The Big Brother Law requires a judge to authorize police access to a suspect’s personal computer and to oversee the search of data. It also clarifies the jurisdiction for such searches between the federal government and state authorities.

Germany’s Federal Criminal Police Office has been studying whether they could either enter premises to plant monitoring devices in computers or send viruses to the computers via the Internet so that police investigators could covertly read the hard disks. Alarmed by the bill, German lawyers are concerned that “someone will always be listening.”

DESIGNED FROM THE BEGINNING

AS THE GREEK RIOTS CONTINUE, many financial experts contend that the Greek government can do little to fix the nation’s economy. Arguing that Greece’s fate was sealed when it joined the European Union in 2001 and adopted the Euro, analysts say that a Greek boom and bust leading to social unrest was “designed from the beginning.”

Bernard Connolly, a British economist and former member of the European Commission, who authored, The Rotten Heart of Europe, exposed the truth about the European Union and its Rothschild-run, European Central Bank, headquartered in Frankfurt Germany:

“The mission of the European Central Bank is to provoke a financial crisis. The purpose of the crisis will be, as Prodi, then Commission president, said in 2002, to allow the EU to take more power for itself.

The sacrificial victims will be, in the first instance, local banks and investors in countries such as Ireland and Club Med. Subsequently, Germany and British taxpayers will bear the burden of bailouts that a newly empowered EU economic government will ordain.” View Entire Story Here.

In a little known rusty colored building in Basle, Switzerland, a small sign by the steps leading to the front doors tells you it is private property. Other than that there is nothing specific which marks it as being the most important building in the world. For the unassuming building houses the Rothschild-run, Bank for International Settlements, also known as the BIS.

The Rothschild-run BIS dictates to all banks of EU member-states specific terms by which cross-border banking is to be transacted. The regulations dictated by the BIS are outlined in their BIS Quarterly (See right hand column) by their subsidiary, The Basle Committee On Banking Supervision.

International control is what the Jewish bankers are all about. And that control is soon to intensify when the Rothschild-sponsored EU begins to put out the fires raging in Greece…