Is The Bailout A Rothschild Trick? 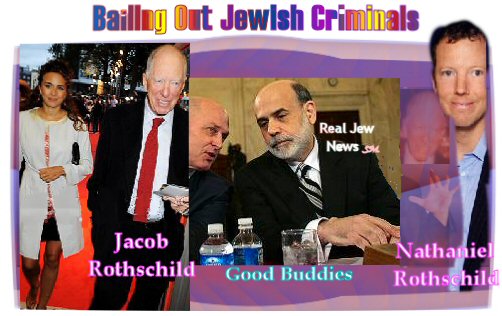 IS THE BAILOUT A ROTHSCHILD TRICK?
By Brother Nathanael Kapner, Copyright 2008-2010

Unique Source: Taxpayers Forced To Bailout Zionist Gangsters @ Rense.com Here
THERE IS NO SUCH THING AS MONEY that does not cost anything.

Money does cost something especially when it is created out of thin air by the Zionist Jews who own & run the Federal Reserve Bank. A simple book-entry is all that is needed when the Fed provides George Bush with an interest-bearing loan to pay for his wars. But it costs the tax payers’ hard earned dollars to pay off the debt PLUS the interest on the Fed’s created money.

The Rothschilds, who are Zionist Jews, are the principal owners of the Federal Reserve Bank. The Rothschild trick is that there is no real money in the system, no goods that they provide, only debts with compounded interest - chargeable to the ‘dumb goyim’ US taxpayers.

Yes. The US taxpayers are the ones IN DEBT due to the bankrupt US government’s spending. And the ‘dumb goyim’ are in debt to Zionist Jews. Which Zionist Jews in particular? The Rothschilds, the Jews on the Fed’s Board of Governors, and the rest of their synagogue buddies at Goldman Sachs (Lloyd Blankfein), Washington Mutual (Alan Fishman), and AIG (Martin Feldstein).

Some are blaming the mortgage lenders, legislators, and investment bankers for the current crisis. This is a Rothschild lie spun to perfection by the Jewish occupied press. But the ones behind the lie are the culprits — the Rothschilds, their stooge, Ben Shalom Bernanke, & their propaganda arm, the Jewish occupied mainstream press. 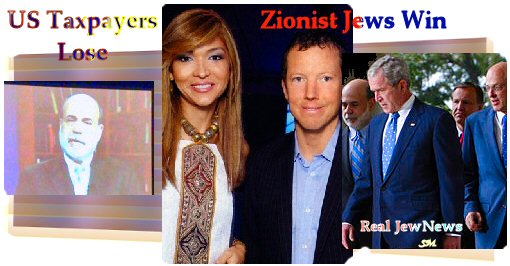 THE DEBTOR LENDS TO ANOTHER DEBTOR

“WE ARE HEADED FOR A FINANCIAL MELTDOWN,” said Senator Christopher Dodd, Chairman of the Senate Banking Committee, in an interview with Good Morning America on September 19 2008.

Yet Dodd deems it necessary to bail out the offenders, Goldman Sachs & Morgan Stanley, who are leading all the wealthy beggar-bankers. America is bankrupt. How then does a bankrupt entity pay off the debts of other bankrupt entities?

The Paulson-Bernanke Zionist bailout plan is nothing less than letting Jewish criminals go free while US taxpayers go deeper into debt. The Jews get the assets — the US taxpayers get higher inflation and more financial stress.

The shadow government operating behind the scenes of America is an elitist cabal of Jewish banksters headquartered in London. This shadow government, run by Jacob Rothschild and his son & heir, Nathaniel Rothschild, has no code of ethics, no moral compass, no Christian sensibilities, and certainly, no loyalties but to worldwide Jewry.

Ron Paul has got his finger right on the aorta of the problem. In his proposed bill, HR 2755, Congressman Ron Paul seeks to “abolish the Board of Governors [mostly Jews] of the Federal Reserve System.” This would have made Ron Paul subject to an assassination attempt had he been allowed by the Jewish occupied press to be a candidate for the US presidency.

We are now under economic martial law. Paulson & the Jew, Bernanke, want free reign without any oversight and controls on their bailout of the criminal Jewish bankers and their bosses, Jacob & Nathaniel Rothschild.

Do We Wish To Remain A Sovereign Nation
& Not Allow The Zionist Jewish Bankers To Rule Us?
Then The Federal Reserve Bank Must Be Abolished!

And: “The Dollar Drops - The ‘Amero’ Cometh?” Click Here