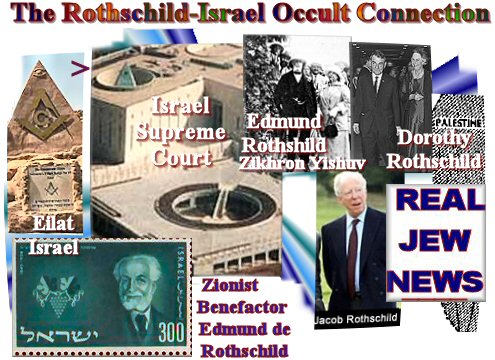 THE HOUSE OF ROTHSCHILD began their multi-million dollar investment in the Zionist state of Israel in 1882 in order to preserve their control over the Suez Canal and future water rights.

Baron Edmond de Rothschild of the Paris branch of the Rothschild dynasty planned to construct a canal in Palestine from Ashkelon on the Mediterranean to Aqaba on the Gulf of Aqaba.

In 1966, Edmund’s son James and his wife Dorothy de Rothschild, who funded many more settlements, established the Yad Hanadiv Foundation dedicated to the establishment of the Knesset and the Supreme Court buildings of Israel. The Supreme Court Of Israel opened in 1992. 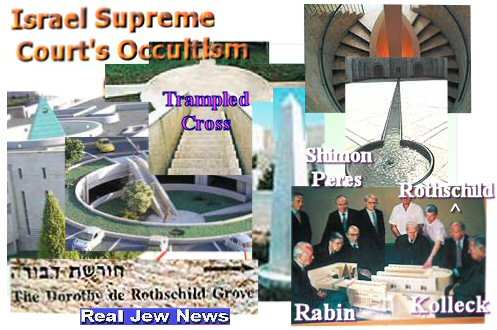 THE OCCULT SYMBOLS OF THE ISRAEL SUPREME COURT

The Israel Supreme Court sits on a plot of land opposite the Knesset and next to the Rothschilds’ Central Bank of Israel. It sits in accordance with Ley-Lines connecting the building to the center of Jerusalem and to the Rockefeller State Museum. The Rockefellers were among the first financial supporters of the Zionist State of Israel owing to their oil and financial alliances with the Rothshilds and their mutual political goals.

In the entrance of the Israel Supreme Court building is a large picture of the “founding fathers” of the court. The picture includes 4th Baron Jacob Rothschild who at the time was Chairman of his parents’Yad Hanadiv.

Outside the President’s Chamber is displayed the letter Mrs Dorothy de Rothschild wrote to Prime Minister Shimon Peres expressing her intention to donate a new building for the Supreme Court. In accordance with her husband’s Illuminati orientation, the designers of the building were instructed to incorporate various Illuminati symbols:

The All Seeing Eye: This occult symbol is on the outside left hand of the building. Its symbolism is taken from the book of Genesis wherein the serpent promised Adam and Eve that their ‘eyes would be opened’ if they ate of the tree of ‘knowledge’ of good and evil. The Hebrew word for ‘eyes’ in this passage is in the singular. The pyramid upon which the eye is inserted represents the Rothschilds’ hierarchical command of world-wide rule.

The Trampled-On Christian Cross: At the front left-hand side of the building are steps leading down to an adapted figure of the Christian Cross designed to be trampled on under foot.

The Egyptian Obelisk: Part of the outside architecture includes a garden with an Egyptian occult Obelisk. This symbolizes in Illuminati culture the Egypto-Israeli origins of the Jews coupled with the Rothschild vision to tie the obelisks of New York and London in a world-rule union.

Masonic Compass & Square With “G” In The Middle: Across from the main Courtroom are stairs leading down to the Masonic occult symbol of Compass and Square with the “G” in the middle. The “G” taken from the Greek word “gnosis” represents “knowledge” which is the key focus of Illuminati culture. 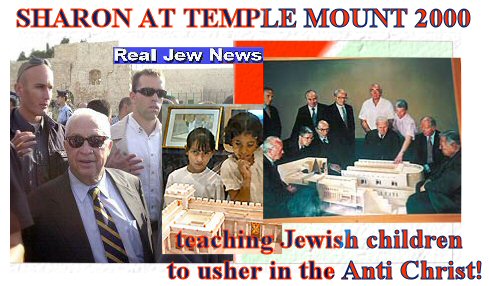 THE ROTHSCHILDS & THE REBUILDING OF THE TEMPLE

In December of 1995, a month after Rabin was assassinated, the Jerusalem Masonic Lodge was established adjacent to the Temple Mount in the underground Grotto of King Solomon. The lodge was founded by the Grand Master of the Italian illuminati Giuliano Di Bernardo who at the opening ceremony declared, “The rebuilding of the Temple is at the center of our studies.”

The Orthodox Christian Church teaches that the rebuilt Jewish Temple will house the Anti-Christ who will be a Jew. This is in accordance with the predictions of the holy Prophet Daniel who said that the Anti Christ “shall not regard the God of his fathers.” (Daniel 11).

HOW DO WE STOP THE ROTHSCHILD’S OCCULT VISION
FOR WORLD WIDE RULE?

1. Commit your life to Jesus Christ and regular Church attendance so as to build a grass roots swelling of a Christian consensus over against a Jewish consensus which now exists world wide.

2. Vote for candidates who do not pander to the Israel Lobby known as the AIPAC.

3. Insist on the dismantling of the Rothschild-controlled Federal Reserve Bank which presidential candidate Ron Paul is decrying.

Thus we can begin a movement to halt the Rothschild’s Zionist control of our lives!