For The Best Post Election Coverage CLICK: Rense.com Here
___________________________________
TARGETING THE INTERNET IN THEIR CENSORSHIP OF FREE SPEECH, the Jewish organization known as the Anti Defamation League (ADL), has as its latest campaign against ‘Anti Semitism,’ the Bernard Madoff $50 billion dollar swindle.

Once again, in its fear of open-discussion regarding Jewish actions & events, the ADL is resorting to labeling as ‘Anti Semitic’ any valid criticisms of Madoff and his multi-billion dollar fraud.

“Internet users have posted comments ranging from stereotypical statements about Jews and money - from suggesting that only Jews could perpetrate a fraud on such a scale - to conspiracy theories about Jews stealing money to benefit Israel.

The fact that so many of the defrauded investors are Jewish in the Madoff scandal has created a perfect storm for Anti-Semites. Nowadays, the first place Jew-haters will go is to the Internet where they can express their hateful ideas without fear of repercussions.” View Entire Story Here.

Having grown up as a Jew in an upper middle class synagogue, my former co-religionists are quick to call those who (justly) criticize the conduct of Jews: “Anti-Semites.” Indeed, Jews will unabashedly and with impunity criticize targeted Gentiles for being “racists,” “extremists,” “bigots,” “nazis,” & “Christian-rightists.”

Amongst themselves, Jews do not hesitate to use disparaging terms when describing Gentiles, such as: “goys,” “schwartzas” (blacks), “shiksas,” (Hebrew for unclean animals when referring to Gentile women), & “white-bread Gentiles.”

In dissecting Foxman’s censure of Internet users, Foxman is actually bringing forth truths that most Americans are fully aware of: “Jews are indeed the ones most capable of perpetrating a financial fraud on such a scale as Madoff’s,” and that “Jews and money” with their loyalties to Israel regardless of ethical considerations when giving of their largesse, is not at all a conspiracy theory, but proven over and over again by factual occurrences.

For who else runs Wall Street except for the Jewish bankers? Thus a financial fraud will most likely be perpetrated by a Jew. And who else has the bulk of wealth except for the Jews? And thus, “Jews with their money,” along with their bias toward the state of Israel, will funnel their funds to Israel at the cost of America’s interests. 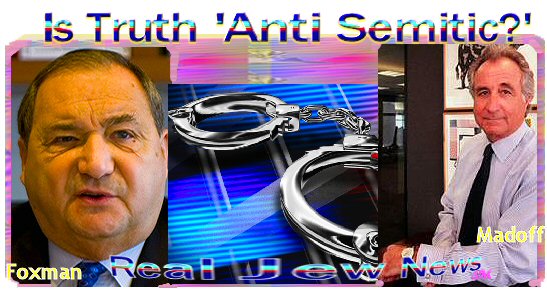 IN AN EFFORT TO COMBAT ‘ANTI SEMITISM,’ the ADL recently published ‘Anti-Semitic’ remarks appearing on various mainline Internet sites with regard to the Madoff fraud.

What is laughable about the ADL’s efforts is that the comments have such a ring of truth to them that the ADL’s combating of Anti Semitism boomerangs right back in their faces.

Here are a few choice ‘Anti Semitic’ comments with their ring-of-truth which the ADL freely shares with us:

Portfolio.com: “The greed and corruption of the Jews has brought the financial system and the American economy low.”

Huffingtonpost.com: “What’s more shameful are the Jewish charities that Madoff funded. Since the uncovering of Madoff’s scheme, a whole underworld is now exposed. It’s funny how a club can freely be called Jewish and exclusive. If it was any other way it would be again considered racist.”

Forbes.com: “Nice that Madoff could manage to send money to Israel and pass the losses on to US investors.”

Huffingtonpost.com: “Where did all the money that Madoff defrauded so many of go? It must have gone to Money Heaven in an underground vault somewhere in the Negev Desert in Israel.”

Haaretz.com: “How is it that Israeli banks have emerged unscathed when the rest of the world’s economy went into a freefall?”

Dealbreaker.com: “Race and religion does not matter to me - BUT IT MATTERS TO THE JEWS. From early childhood Jews are taught to look at the world in terms of ‘Jew’ & ‘Other.’ Thus there will never be peace in Palestine or any place to which the Jews lay claim. In my experience, the worst thing you can assert to a hardnosed JEW is that ‘everyone is equal.’” View Entire Comments On The ADL Site Here.

Bravo to the ADL! Once again the ADL outdoes itself and offers all of us ‘Anti Semites’ some real truth for a change. And this is the kind of ‘change’ we can really believe in…