Bush - A Legacy Of Perpetual War 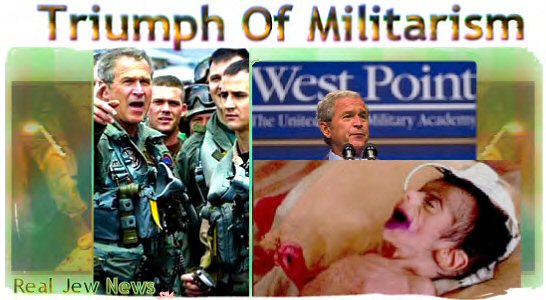 At the outset of George W Bush’s presidency in 2001, top foreign policy priority was not to prevent terrorism, but rather, it was to increase the oil flow from sources abroad and gain control over undeveloped Middle East oil reserves.

US government studies demonstrate that Iraq was the focus of unexplored oil reserves as ‘the greatest prize of all.’

In May of 2001, Bush had some telling words after a meeting with neocon Zionist Jews, Secretary of Defense Paul Wolfowitz & Secretary of Energy Spencer Abraham: “What people need to hear loud and clear,” Bush told reporters, “is that we’re running out of energy in America.”

“Running out of energy” prompted Bush to establish in January of 2001, the National Energy Policy Development Group. The task force was headed by Vice President Dick Cheney who was charged with developing a long range plan to meet US energy requirements. Prior to joining the Bush administration, Cheney had served as CEO of the Halliburton Co, an oilfield services firm.

As the head of the NEPDG, Cheney availed himself of his former colleagues and financial backers such as executives of Enron Corp for advice on major issues. It was the renowned alternative news source, Rense.com, that broke the story of Enron’s arrangement with Halliburton to build a multi-billion dollar oil pipeline through Afghanistan and the subsequent failed negotiations with the Taliban prior to the events of 9/11.

When in July of 2001, the negotiations between Enron, Halliburton, the US government and the Taliban broke down due to the Taliban’s rejection of conditions, the US representatives threatened the Taliban, saying, “either you accept our offer of a carpet of gold, or we bury you under a carpet of bombs.” September 11, 2001, gave Washington the excuse to deliver its carpet of bombs to Kabul - and thus the rationale of energy security changed into a military one.

Geopolitical analyst, Michael Klaire, pointed out that at first glance, the National Energy Policy, or the “Cheney Report” as it is often called, appeared to reject the path of reliance on imported oil in favor of renewable energy at home. But careful examination of the report led to an entirely different conclusion.

Aside from increasing domestic oil production by drilling in the hotly contested Arctic National Wildlife Refuge, Klaire observed that nothing in the NEP’s recommendations would contribute to a significant decline in US dependence on foreign oil. In fact, the very opposite was true: The basic goal of the Cheney plan was to find additional external sources of oil for the United States. View Entire Story Here.

One of the signers of the National Energy Policy was Bush’s Secretary of the Treasury, Paul O’Neill, who was fired by Bush in 2002 for not being a team player. O’Neill later revealed that due to its vast oil reserves, Iraq had become an object of intense interest to Cheney and Bush at the outset of the administration in early 2001.

In a January 11, 2004 interview, O’Neill revealed that Bush had decided to make an Iraqi regime-change a top priority 8 months before the 9/11 attacks:

“From the very beginning there was a conviction that Saddam Hussein was a bad person and that he needed to go. Going after Saddam was topic ‘A’ only 10 days after the inauguration - eight months before September 11.

“It was all about finding a way to effect a regime change in Iraq. That was the tone of discussions. Bush kept on saying, ‘Go find me a way to do this.” View Entire Story Here.

THE TRIUMPH OF MILITARISM

“WE MUST TAKE THE FIGHT TO OUR ENEMIES across the world,” Bush told an audience of West Point cadets on December 9 2008. In an attempt to define his own legacy during his last days in office, Bush declared that the US military is “stronger and more prepared” than the one he inherited in 2001.

“We’ve laid a foundation, Bush told the cadets, “upon which future presidents and future military leaders can build.” It was his defense against his many critics who say that Bush stretched the military to dangerous levels with wars in both Iraq and Afghanistan.

On such critic is the renowned political analyst, Patrick Buchanan, who takes Bush to task for getting the US bogged down in two costly wars:

“Two-thirds of Americans now believe that the Iraq war was a mistake. What turned Americans against the war was the long, costly, bloody slog, now in its fifth year, with nearly 5,000 of our soldiers dead.

Americans no longer believe that by making the world democratic can we keep our nation secure and free. The war in Afghanistan, too, after we failed to capture bin Laden, has become a long slog to create a ‘democratic’ Afghanistan. We are entering the eighth year of the war yet the Taliban grows stronger and victory is further away than ever.” View Entire Story Here.

Bush has fought his wars and the wars have won. The Military/Zionist Complex, through perpetual wars for perpetual peace, (and perpetual oil), is the apparent victor. Future presidents, including president-elect, Barack Obama, will now build upon the foundation laid by George W Bush: “War is good for business, security, and control.” We are given bread…but we must give back our very souls.