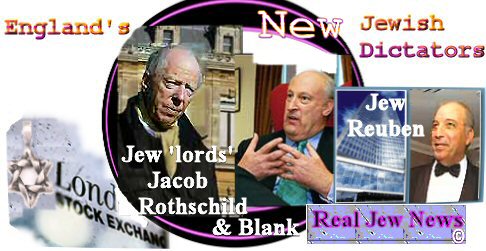 Here Is A List Of The Top 8 Jewish “Dictators” Of Present Day England:

# England’s politicians know where to stand on the issues so as to please the Jew, ‘Lord’ Jacob Rothschild.

2. ‘Lord’ David Wolfson: ‘Knighted’ (Jew $$$ is ‘honored’) in 1984. Former Chief of Staff to Margaret Thatcher from 1979-85. Served as Chairman for Jewish-run corporations such as Great Universal Stores & Fibernet.

4. Alex Brummer: Editor of England’s ’s 2nd largest daily newspaper the Daily Mail. Prior to his new position at the Daily Mail in 2000, Brummer was the Financial Editor of the Guardian.

# England’s politicians know where to stand on the issues so as to please the Media-Jew, Alex Brummer.

~ The Group’s role is to co-ordinate all of the real estate activities of Credit Suisse throughout Europe. Marcus is also President of UK’s trade body, the British Property Federation.

~ Blank chairs United Jewish Synagogue’s Hillel College Outreach and is involved with the Labour Friends of Israel. Blank is also on the Board of Governors of Tel Aviv University. Blank is an active promoter of business links between the UK and Israel.

~ Reuben exploited the frantic selling in the aftermath of the collapse of the Soviet system when Russian aluminum smelters were incapacitated by debt due to Harvard University’s Jeffrey Sach’s (a Jew) hyper-inflationary program of “economic shock therapy” for post Soviet Russia Here.

~ By Reuben buying up half of Russia’s aluminum industry he now has an estimated wealth of 3.25 billion in British pounds. Reuben is founder of the Reuben Foundation which supports Zionist causes around the globe. 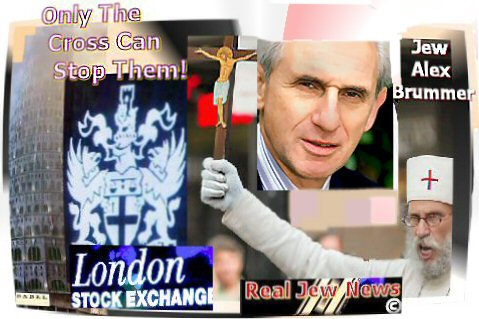 HOW CAN WE STOP THE JEWISH $TRANGLEHOLD
OF ENGLAND & THE UK & ALL OF EUROPE?

+ Pray To The Lord Jesus Christ That Though The Power Of His Cross The Jews Of England Will Be Conquered Once & For All!

+ A Special Note To All Of My Readers

I am being banned from many Sites & Forums. You Tube, Craig’s List, New Republic Forum, various Google Groups, and many so-called “religious sites” have banned my articles. They have all placed a screen on my IP Address.

~ Thus I am asking all of my readers that they themselves post my articles on as many Sites & Forums as possible, (still using my name & link), so as to wake people out of their slumber!

And: “How The Jews Took Great Britain” Click Here