Is Sarkozy A Rothschild Puppet? 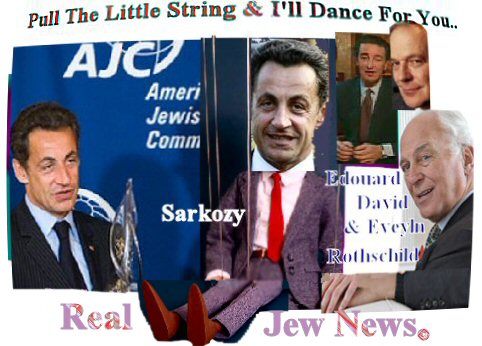 IS SARKOZY A ROTHSCHILD PUPPET?
By Brother Nathanael Kapner, Copyright 2008-2011

In a popular book, “Nicolas Sarkozy’s Salonika,” Sarkozy reveals that his maternal grandfather, Aaron Mallah, (b 1890), was part of the Sephardic Jewish community in Salonika before moving to Paris in the early 1900’s. (Jews trace their racial identity from the mother).

Sarkozy’s Mallah family is one of the oldest Jewish families of Salonika, Greece. To this day many of the Mallah family are still active Zionists around the world. Sarkozy, as the book reveals, came to Salonika for the first time in 1973 to receive part of the Mallah inheritance belonging to his Jewish mother.

Sarkozy’s great uncle, Moshe Mallah, was a well-known Rabbi and a devoted Zionist who in 1898 published “El Avenir” the leading paper of the Zionist national movement in Greece at the time.

Sarkozy great cousin, Asher Mallah, was a Senator in the Greek Senate, who in 1912 helped to establish the “Technion ” an elite technological university in Haifa, Israel. In 1919 Asher Mallah was elected as the first President of the Zionist Federation of Greece.

Another of Sarkozy’s great cousins, Peppo Mallah, was an activist Zionist who in 1920 served as Greece´s Minister of Finance. After the establishment of the State of Israel Peppo Mallah moved to Israel & became Israel’s first diplomatic envoy to Greece.

GIVEN SARKOZY’S JEWISH FAMILY TIES and his installment to the EU Presidency set for next month - a Sarkozy-Rothschild connection can be demonstrated.

One month after Sarkozy’s election to the Presidency of France in 2007, Sarkozy admitted that during the campaign he contacted his “friend” Edouard de Rothschild, the owner of France’s daily Liberation, to complain about a journalist’s article about him. Edouard de Rothschild proffered his empathy to Sarkozy and no unfavorable articles had appeared in Liberation again.

SARKOZY WORKS FOR A ROTHSCHILD EU

AS THE EU’S NEXT PRESIDENT Sarkozy plans to push for the ratification of the Lisbon Treaty even though Ireland just voted against it.

Under EU laws if one of its member states rejects a treaty the EU is mandated to scrap the bill.

But Sarkozy hopes that Ireland will buckle under pressure and fall into line. The usual tactic of the EU is to keep repeating a referendum until they achieve their desired result.

Sarkozy as a puppet of the Rothschild controlled European Central Bank is hell bent on sacrificing France’s sovereignty and the sovereignty of all other European nation states on the altar of a One World Government.

For More See: “How The Rothschild Dynasty Operates” Click Here


And: “Vote No To A Zionist EU” Click Here