How The Rothschild Dynasty Operates 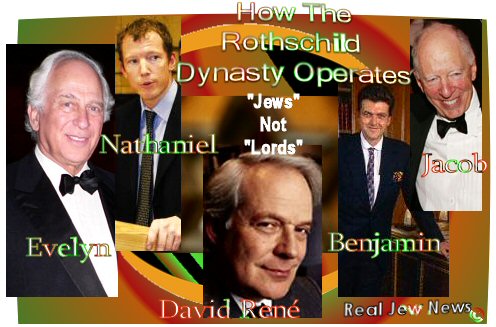 HOW THE ROTHSCHILD DYNASTY OPERATES
By Brother Nathanael Kapner, Copyright 2008-2010

Sources: The Rothschilds, Frederick Morton; The Empire Of The City, E. C. Knuth;
The Elite Don’t Dare Let Us Tell The People, Robert Gaylon Ross;
Two Rothschilds And The Land Of Israel, Simon Schama.
SECRECY IS THE HALLMARK of the Jewish Rothschild Dynasty. But I, Brother Nathanael Kapner, a former Jew, am intent on bursting the “Rothschild-bubble.” I am doing this because I perceive that the Rothschilds, (they are Jews), are the leaders, (they are secretive), in destroying Christian civilization throughout the world.

Here Is A List Of The Prominent Family Members Of The Jewish Rothschild Dynasty & Their Principal Functions:

Jacob Rothschild: Born in 1936 in England. After gaining prominence in the family bank, NM Rothschild and Sons in London, he established in 1988, the Rothschild Investment Trust, now known as RIT Capital Partners Here which holds controlling investment interest in Royal Dutch Shell Oil.

~ Jacob Rothschild is the Chairman of Yad Hanadiv Here, a Zionist Charity of the Rothschilds’, which gave to Israel the Knesset & the Israeli Supreme Court.

Nathaniel Rothschild: Born in 1971 in England. He is Jacob Rothschild’s son & heir apparent. He began his career in 1994 at the Rothschilds’ Jewish sister bank, Lazard Brothers in London.

~ Currently, Nathaniel Rothschild is an executive (what else would he be?) with Gleacher Partners, a New York-based mergers and acquisitions (M&A) advisory firm founded by Eric Gleacher, former head of M&A at another Jewish sister bank of the Rothschilds,’ Lehman Brothers.

~ It should be noted that both Lazard Brothers & Lehman Brothers hold shares along with the principal share holder, NM Rothschild & Son, in the privately-held Jewish bank known as the Federal Reserve System of America Here.

Evelyn Rothschild: Born in 1931 in France. He began his career as Director of the Paris-based De Rothschild Freres Bank. Between 1976 & 1982 he became Chairman of NM Rothschild & Sons in England & Rothschild Bank in Zurich. He is also honorary director of De Beers Consolidated Mines & IBM United Kingdom Holdings Limited.

~ Evelyn Rothschild is a man of many propaganda-hats. He has served in Directorships of the internationally renown, The Economist, and newspapers owned by Lord Beaverbrook, which included the London Evening Standard & the Daily Express. He has also served as Director of Lord Black’s Daily Telegraph.

David René Rothschild: Born in 1942 in NYC. He is currently the Senior Partner of Rothschild & Cie Banque of Franc Here. He took over the Chairmanship of NM Rothschild & Sons of London upon the “retirement” of Evelyn Rothschild in 2003. 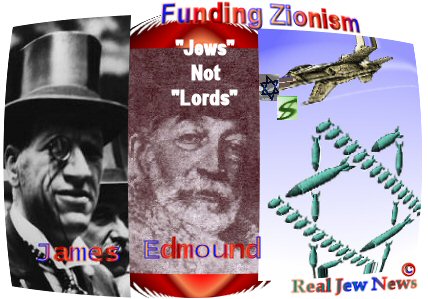 THE STATE OF ISRAEL would not exist if it were not for the Jewish Rothschild Dynasty. Shimon Peres, the current President of Israel, recently said the following about the Rothschilds:

“Never has a family donated so much of its wealth to the making of the State of Israel.”

Between 1890 and 1924 Edmound Rothschild had established many settlements in Palestine Here through his co-funding of the Jewish National Fund. Later his son, James, established Yad Hanadiv, to finance the Zionist entity of Israel. Today, Jacob Rothschild is the Director of Yad Hanadiv.

Due to Yad Hanadiv donating 6 million Israeli Pounds towards the construction of the Knesset building & millions more for the Israeli Supreme Court, and because of his continual benefactions, Jacob Rothschild has been named an “Honorary Fellow of Jerusalem.” In other words, the Rothschild Dynasty is underwriting the Zionist State of Israel.

HOW CAN WE STOP THE JEWISH ROTHSCHILD DYNASTY?

1) Open up a bank and compete with the Rothschild Dynasty.

+ Pray To The Lord Jesus Christ That A Christian Consensus Would Develop Once Again Throughout The World!

And: “Corporate Power Of The International Jew” Click Here