G-20 Pittsburgh - New Weapons For A US Police State 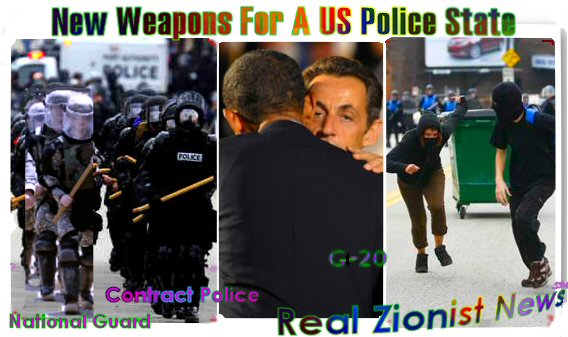 - G-20 PITTSBURGH -
NEW WEAPONS FOR A US POLICE STATE 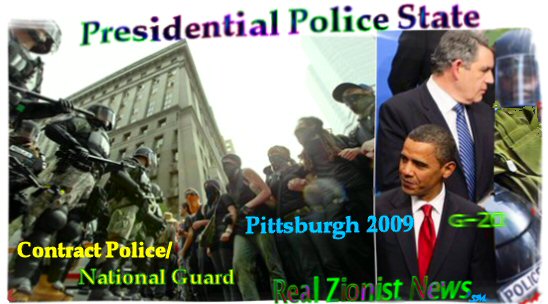 AN ARSENAL OF CROWD CONTROL WEAPONS INCLUDING ONE THAT MADE ITS DEBUT IN THE US was deployed in a massive police presence during the G-20 summit in Pittsburgh on September 24-25, 2009.

The fascist US Department of Homeland Security, (in Pittsburgh run by the Jew Dr Loren Roth), the Secret Service, and local government officials decided that a massive pre-emptive police presence, along with the National Guard and US Air Force, was necessary to extinguish lawful dissent - and a Federal Court ruling gave them free rein to do so.

The decision to employ a National Guard Combat Battalion in Pittsburgh and air-coverage by the US Air Force evinces the Zionist-Jewish agenda to psychologically prepare American citizens for the eventual unfolding of martial law into civilian life.

Arresting some 200 demonstrators, civil liberties groups charged the police with illegal incarcerations, use of the US military in violation of the Posse Comitatus Act that bars troops from being deployed as police in civilian affairs, and abuse of weaponry used against nearly 10,000 peaceful demonstrators. (It was the fascist Homeland Security - and Senator Joe Biden that first proffered the idea that the military should be given the power to arrest civilians. G-20 Pittsburgh brings us there.)

And who were the US military and the Black-shirt police units, funded by the US Department of Homeland Security, arming themselves against? Foreign terrorists? No, mainstream Americans who included union workers, students from the University of Pittsburgh, political activists and environmentalists.

Indeed, the makings of a fascist America is being brought to us by the Jew-dominated US Department of Homeland Security, (Senator Joseph Lieberman, Chairman Homeland Security Committee; Jan Lesher, Chief of Staff for Operations; Noah Kroloff, Chief of Staff for Policy); David Heyman, Assistant Secretary, Office of Policy; Alan Bersin, Assistant Secretary, Office of International Affairs), which “provides federal, state and local officials with the technology and capabilities to protect the homeland,” as stated on the DHS Web Site.

And what’s next in Homeland Security’s “protection of the homeland?” The Real ID Card for state-issued driver’s licenses and identification cards - complete with biometrics - is slated for action via the DHS Real ID Final Rule. Don’t believe me? It’s on the DHS Web Site complete with a picture of a cop to scare us into compliance. 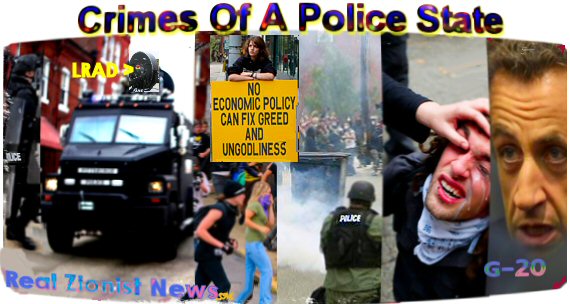 NEW WEAPONS
FOR WAGING WAR ON US CITIZENS

THOUSANDS OF POLICE UNITS IMPORTED FROM ACROSS THE NATION, employing private police contractors along with military support: armored humvees, gun boats and top cover provided by the US Air Force, came to Pittsburgh to wage war on peaceful demonstrators.

“I saw the LRAD in action twice on the streets of Pittsburgh. Blasting a shrill, intense piercing noise, it quickly swept the streets and even drove residents into their homes. View Entire Story Here.

The LRAD has only been used in the past by the US military to repel battlefield insurgents and Somali pirates. But now, due to Homeland Security grants, police departments nationwide (including the Pittsburgh force) looking to “subdue unruly crowds and political protesters” are purchasing the LRAD high-tech device capable of inflicting permanent ear damage on American citizens.

ALONG WITH FURTHER FEDERAL CONTROL over local and state police via allocations and grants, Attorney General Eric Holder, accompanying Janet Napolitano of Homeland Security, just delivered an ‘anti terror’ speech on October 5, 2009 at the International Association of Chiefs of Police Conference held in Denver.

Everything is now in place (and being implemented) for a Federal-centered police state due to the enactment in May of 2007 by Bush of the National Security and Homeland Security Presidential Directive which places the Executive Branch and the Secretary of Homeland Security in charge of ‘domestic security.’ 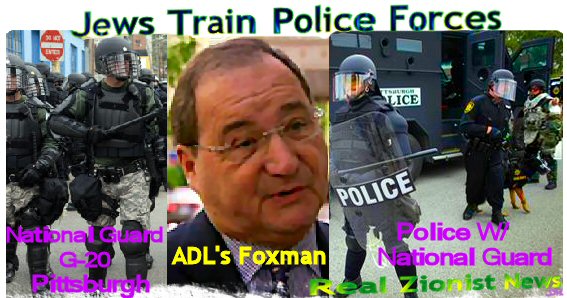 ALTHOUGH THE FIRST AMENDMENT guarantees “the right to assemble,” the demise of the US Constitution is the intent of Zionist Jews who train US police forces across America, (and even brag about it), in order to gain total mastery over the Gentiles.

Zionist Jewry’s puppet, Barack Obama, characterized the demonstrators as “rabble-rousing anti-capitalists.” But the message of the demonstrators was specific: The G-20 leaders, including Obama, do not represent the will of the people - but the agenda of corporate oil, military advisers, and international Jewish financiers. View Entire Story Here & Here.

The IMF has as its president, the Jew, Dominique Strauss-Kahn. The director of the IMF is the Jew, Leslie Lipschitz. View IMF Jews Here, Here, & Here.

The Jews of international finance, who in the past only controlled single nations’ monetary systems, have expanded into a global cartel. And this Zionist-Jewish cartel funds the weapons of police states worldwide.

Zionist Jewry and its partners at Homeland Security have now added a new enemy to their list. Not fictitious terrorists - but - “We, The People…”

And: Homeland Security Jews Want To ‘Taser’ You! Click Here