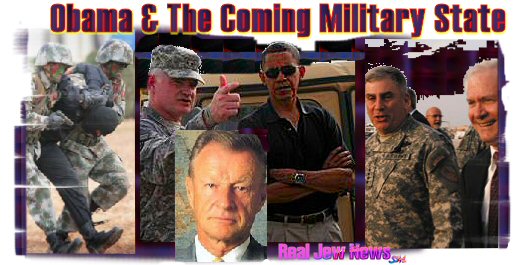 Sources: Military Dictatorship USA? Here
Power Shift @ Rense.com Here
A NEW MILITARISM is now emerging in America and Barack Obama is about to become the figurehead for a militarized US nation. Why do I say this?

I say this because the new ruling elite in America, as outlined by Webster Tarpley of Rense.com, is a “Trilateral” hawkish group made up of Secretary of Defense Robert Gates, David Rockefeller, and his 79 year old protege, Zbigniew Brzezinski.

Add Henry Paulson into this “Principals Committee” and you have along with Rockefeller, the international Zionist bankers in the “Trilateral” mix.

Obama appears in every photo-op as if he’s the cat that swallowed the presidential mouse. I think Obama knows something that only his enablers, Gates & Brzezinski, know for sure. And this should not surprise anyone in our day of “electronic votes” which can easily be manipulated by powerful figures who not only control the US military but electronic voting machines as well.

Tarpley informs us in his “Power Shift,” written on July 20 2008, that the “Trilateral bloc” began displacing the Jewish neocons in Washington during the 2006 US congressional elections.

At that time the discredited neocon Defense leader, Rumsfeld, was forced out and replaced by Robert Gates, who had served as Brzezinski’s office boy at the National Security Council during the Carter years. Brzezinski gave Gates a ‘rave review’ in Time Magazine upon Gates’ appointment in 2006.

Brzezinski has a maniacal hatred for Russia and is a rabid imperialist whose weaponized-brain is now focused on the Afghan-Pakistan war. Brzezinski came out in full support of Obama last August of 2007. Then Brzezinski began advising Obama on foreign policy in March of 2008.

In other words, the Gates-Brzezinski-Rockefeller-Paulson “Principals Committee” found a man in Obama they could control as a figurehead for their militaristic ambitions.

OBAMA WILL ESCALATE THE AFGAN-PAKISTAN WAR

ANTI WAR ACTIVISTS delivered a letter on October 10 2008 to Obama, calling on Obama to “cool his political rhetoric” about bombing targets in Pakistan.

The letter followed Obama’s remarks about Pakistan during his October 8 2008 debate with McCain in which Obama said:

“If Pakistan is unable or unwilling to hunt down Osama bin Laden and take him out, then we should take him out.” View Entire Story Here.

This political stance by Obama, (Brzezinski’s stance), coincides with an earlier remark by Obama during his August 1 2007 debate with Clinton regarding the bombing of Pakistan:

“If we have actionable intelligence about high-value terrorist targets and President Musharraf won’t act, we will.” View Entire Story Here & Here (Reuters Video).

The people of Pakistan reacted with horror to Obama’s remarks believing that the people of the US hold the nation of Pakistan in contempt. Pakistani political analyst, Dr Ghulam M Haniff, wrote, “People throughout Pakistan went wild expressing their disdain for the US. No one could believe that after all that Islamabad had done for America’s war on terrorism, Pakistan itself was now being considered fair game for bombing.”

On October 9 2008, the Pentagon proposed a $450 billion increase in the military budget for 2009. Many believe that this increase is a preparation for a long Afghan-Pakistan war… 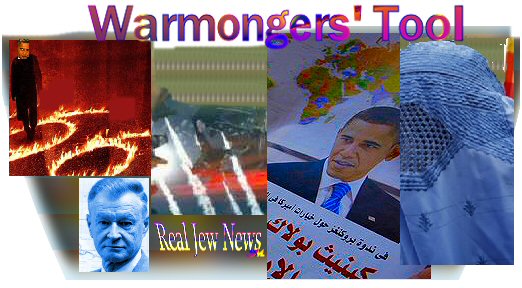 THE OBAMINATION OF DESOLATION

A COMING MILITARY STATE in America will have as its figurehead, the likely next President of the US, Barack Obama. Already we have the Military Commissions Act & the Defense Authorization Act which allows the US military to pre-empt the authority of states to decide on local police action & grants the president carte blanche in declaring ‘martial law.’

Added to these military provisions, Obama advocates a Brzezinski-militaristic agenda:

“We need more troops in Afghanistan to finish the fight against the terrorists who attacked us on 9/11.” View Entire Story Here.

“Our military needs more men and women to reduce the strain on our active force. I will add 65,000 soldiers to the Army and 27,000 Marines.” View Entire Story Here & Here.

“China’s military capabilities require preparedness on our part. We must guarantee that China’s rise is peaceful. This requires that the US maintains a military that is second to none and that we retain our forward deployment in the Asia-Pacific area.” View Entire Story Here (PDF).

“I will take steps to end the genocide in Darfur by increasing pressure on the Sudanese government to stop impeding the deployment of a robust international force.” View Entire Story Here.

“Russia’s invasion of Georgia has created a serious security challenge for the US. I will address the challenge posed by an increasingly bellicose Russia by pursuing a strategy that advances our national interests.” View Entire Story Here.


And: “Is Biden Good For The Jews?” Click Here