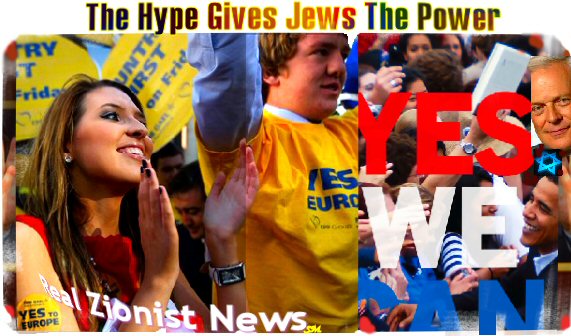 “IT’S A GREAT DAY FOR EUROPE!” wrote the European Jewish Press on October 4, 2009, only two days after Ireland voted for the Lisbon Treaty.

For on October 2, 2009, Ireland, pressured by EU threats of unemployment and fooled by a staged media “Yes” promotion, signed away the sovereignty of all 27 member states to the EU authorities in Brussels who are controlled by Zionist Jews in Frankfurt.

For in Germany’s city of Frankfurt lies the headquarters of the European Central Bank - with its President, the Jew, Jean Claude Trichet - and his masters who control all Central Banks, the Jewish Rothschild Dynasty, who boast of their historical roots in Frankfurt. Click Frankfurt Office Here.

“The EU will now speak and act with one voice on the basis of common values precious to all Europeans,” the European Jewish Press declared.

Of course the “common values” which the Jews of the European Jewish Press speak of are those “precious” to Jews - NOT to “all Europeans.” The causes, with their underlying values which Jewry supports and funds, most Europeans oppose.

THE QUESTION IS: “Why are the Jews exulting in the ratified Lisbon Treaty while many European Gentiles are decrying it?”

Is it because the Jews know that a single unit of unelected power accountable to no one is easier to influence than having to bribe a plethora of elected officials from each of the 27 member states of the EU?

Or is it because the European Community, which began as an economic cartel founded on Jewish banking interests, can now be manipulated to Jewry’s advantage via the new political and judicial policies that the Lisbon Treaty stipulates?

Some may argue, such as the European Commission which enacts policies for the EU, that Europe needs to present a more unified front on the world stage. To preserve its influence, the Commission contends that the EU needs a unified policy with regard to foreign affairs and judicial matters.

CITIZENS OF A SUPRANATIONAL STATE

THE LISBON TREATY GIVES THE EU a legal personality and an independent corporate existence for the first time - separate from and superior to its member states.

Lisbon gives the EU all the normal powers of a Federal State. This new Federal EU will soon have its own political President, Foreign Minister and foreign policy, its own diplomatic corps and voice at the UN.

The new EU will now make the laws for its member states with further power to make new laws by Qualified Majority Voting, giving larger member states, that is, Germany and France, (both controlled by Zionist Jews), greater power.

This will unleash Germany’s historic imperial ambitions through the instrument of a fully integrated Europe and represents the largest transfer of powers from member nations to Brussels in EU history.

This gives the 500 million inhabitants of the present EU Member States a citizenship separate from their national States for the first time. The duties conjoined to this EU citizenship will preempt those of one’s own nation due to the superiority of EU laws over national Constitutions. All Europeans must now submit to the laws of the EU as “citizens” of the new Union. View Entire Story & Text Of The Lisbon Treaty Here & Here. 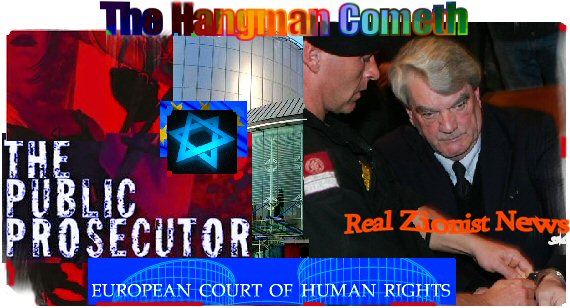 ATTACHED TO THE LISBON TREATY is the Charter Of Human Rights which will now be legally binding on all EU member states.

The Charter gives the European Court Of Human Rights in Strasbourg, France, the power to decide social policies for all citizens. With Lisbon intact, social issues such as abortion, homosexual/lesbian marriages, racism and of course, “Anti Semitism,” will be determined by the office of the European Public Prosecutor.

With regard to “Anti Semitism,” which has an EU Legal Working Definition, European Jewry, a powerful and influential voice in EU affairs, will soon be lobbying to exploit the new powers of the centralized Public Prosecutor.

This means that “Holocaust denial” (Historians Beware) which is a crime in Germany and France, will be a criminal offense throughout the EU. This will mark the end of freedom of speech for every citizen of the new Union. Recently, the ADL of Europe and the Jerusalem Center Of Public Affairs, announced their campaigns for 2010 to “expand” Holocaust denial legislation in Europe by targeting the Internet and calling for increased police training. 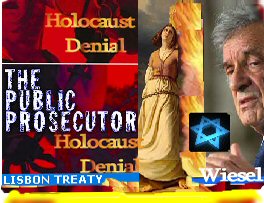 In April 2007, the European Commission approved legislation that made Holocaust denial punishable by incarceration. But the EC gave member states the option of non-enforcement if such a prohibition did not exist in their own laws.

European Jewry immediately promoted the legislation, announcing that Germany wanted to make Holocaust denial a crime in every member state. Then the bloodthirsty Jews began pushing Italy to initiate the jailing of Holocaust deniers.

Although the EU responded to the opposition by stating that the legislation was only “symbolic,” the vindictive Jews will now be sure to make this “symbolic” legislation capable of being enforced throughout Europe. For with Lisbon intact, all of these countries who wished to preserve their nation’s freedom of speech will be FORCED by a Central Public Prosecutor to jail all those who even hint at some form of Holocaust denial.

The death knell has been struck. ‘Holocaust-Religion’ has replaced Europe’s historic Christian faith. Anti-Christ Jews now rule Europe as they do in America. And all ‘heretics’ who deviate from Europe’s Judaic faith will be burned at the stake…

And: Vote No To A Zionist EU! Click Here