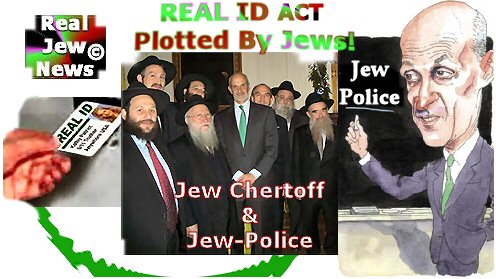 ——-
THE REAL ID ACT OF 2005 is a Jewish plot to deprive Americans of their basic Constitutional rights of “free assembly” & to “bear arms.”

The REAL ID Act of 2005 was covertly attached as a rider on an Appropriations Bill funding the war in Iraq after it failed to pass on its own merits.

Anti-Christian Jews who run US Homeland Security, namely, the Jew, Michael Chertoff and his 3 Jewish deputies, want to jew-lord-it over all Americans by depriving Christian citizens of their rights under the cover of “homeland security.” The Jewish-planned REAL ID Act is slated to go into effect on May 11 2008.

Here is what the Jewish planned REAL ID Act will do:

Persons not possessing a Real ID Card will be denied the right to enter into any Federal Building including a Congressman’s or Senator’s office. This effectively denies these persons their rights to assembly and to petition the government as guaranteed by the 1st Amendment.

Persons not possessing a Real ID Card will be denied the right to bear arms as guaranteed by the 2nd Amendment. This is because the US Bureau of Alcohol, Tobacco, Firearms and Explosives will decree that such a form of identification is necessary to meet Federal requirements for purchasing a firearm.

Persons not possessing a Real ID Card will be denied the right to commercial air travel.

Persons not possessing a Real ID Card will be denied the right to make transactions with a Federally licensed bank (every Bank!) 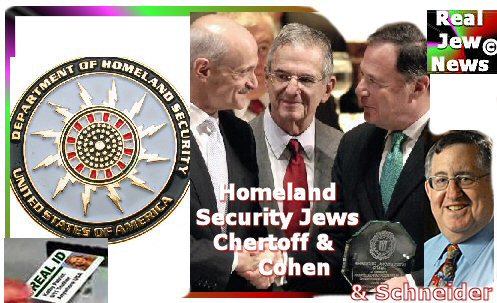 THE 4 JEWISH PLOTTERS OF THE REAL ID ACT

3) Fred Schwien: Executive Secretary of Operations of US Homeland Security.

4) Jay Cohen: Under-Secretary for Science & Technology of US Homeland Security. (This Big Brother Jew is the one who will embed his micro-chip into your wrist or forehead).

MONTANA TAKES THE LEAD IN OPPOSING THE REAL ID ACT

OUT OF 12 STATES OPPOSING the REAL ID Act, Montana introduced a Bill last April 2007 opposing the Act because of its infringement upon basic Constitutional rights:

—— “WHEREAS, use of the state-issued Identification Cards will be necessary for any type of federally regulated activity for which an Identification Card must be displayed, including flying in a commercial airplane, making transactions with a Federally licensed bank, entering a Federal Building, or making application for Federally supported public assistance benefits, including Social Security; and

WHEREAS, some of the intended privacy requirements of the REAL ID Act, such as the use of common machine-readable technology and state maintenance of a database that can be shared with the United States and agencies of other states, may be used for purposes that were never intended; and

WHEREAS, these potential breaches in privacy that could result directly from compliance with the REAL ID Act may violate the right to privacy, as secured by Article II, section 10, of the Montana Constitution, of thousands of residents of Montana;

THEREFORE, the purpose of the Legislature is to refuse to implement the REAL ID Act and thereby protest the treatment by Congress and the President as agents of the Federal government.” —— Here; Here; & Here

HOW CAN WE STOP THE JEWS & THEIR REAL ID ACT?

JEW ARE HELL-BENT on controlling our lives. The Jews now have so much political power that it is almost impossible to stop them. What’s the solution so as to remedy the horrible plight the USA is now in - owing to Jewish domination of our lives?

Should we throw up our arms in despair?

+ OR: Pray To Jesus Christ That By The Power Of His Cross -
The Jews Of US Homeland Security Will Be Conquered!