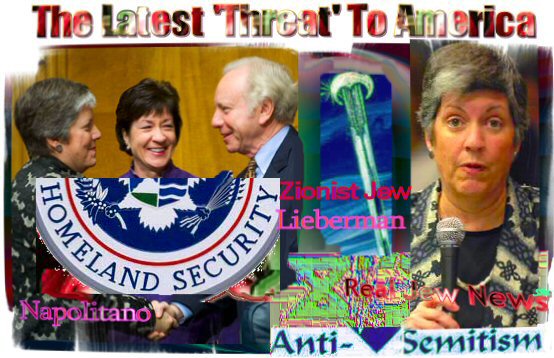 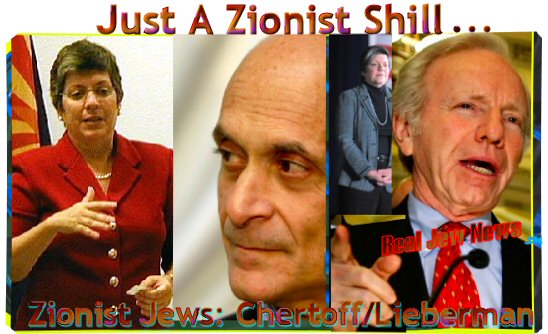 THE JEWISH-CONTROLLED US DEPARTMENT OF HOMELAND SECURITY is now turning against upright American citizens.

Directing the Department’s targeting of American citizens is the Zionist Jew, Joseph Lieberman, the Senate Homeland Security Chairman, and Janet Napolitano, the Secretary of Homeland Security, an obvious Zionist shill and reputed lesbian.

In an alarming ‘Gestapo-oriented’ Report by US Homeland Security issued on April 7, 2009, entitled, Rightwing Extremism: Current Economic and Political Climate Fueling Resurgence in Radicalization and Recruitment, the fascist Department of Homeland Security specifies a new ‘threat’ to America’s security, namely, all critics of Jewry’s agenda to destroy America, whom the Department labels: “Anti-Semitic extremists.”

The Report, prepared by the Extremism and Radicalization Branch, Homeland Environment Threat Analysis Division and coordinated with the FBI, was approved by Homeland Security Secretary, Janet Napolitano, a reputed lesbian, who is the Talmudic Jew Michael Chertoff’s successor. View All Napolitano Reputed Lesbian Articles Here.

The alleged lesbian Napolitano, describing a “homegrown threat” to national security, issued a statement on April 20, 2009, defending the Report, saying:

“We must protect the country from homegrown terrorism regardless of the ideology that motivates it. The DHS will continue to work with its state and local partners to prevent and protect against the potential threat to the United States associated with any rise in extremist activity.” View Entire Report Here.

The “ideology” that Zionist-shill and alleged lesbian Napolitano is targeting, has been specified in two entries on page 4 of the Report. And that “ideology” is “Anti-Semitism,” Jewry’s deceptive term to destroy freedom of speech in America:

” Current Economic and Political Climate. A recent example of the potential violence associated with a rise in rightwing extremism may be found in the shooting deaths of three police officers in Pittsburgh, Pennsylvania, on 4 April 2009.

The alleged gunman’s reaction reportedly was influenced by his racist ideology and belief in anti-government conspiracy theories related to gun confiscations, citizen detention camps, and a ‘Jewish-controlled one world government.’”

“Exploiting Economic Downturn. Rightwing extremist chatter on the Internet continues to focus on the economy, the perceived loss of U.S. jobs in the manufacturing and construction sectors, and home foreclosures. Anti-Semitic extremists attribute these losses to a deliberate conspiracy conducted by a cabal of ‘Jewish financial elites.’

These tactics are employed to draw new recruits into rightwing extremist groups and further radicalize those already subscribing to extremist beliefs. The DHS assesses that this trend is likely to accelerate if the economy is perceived to worsen.” View Entire Report Here. 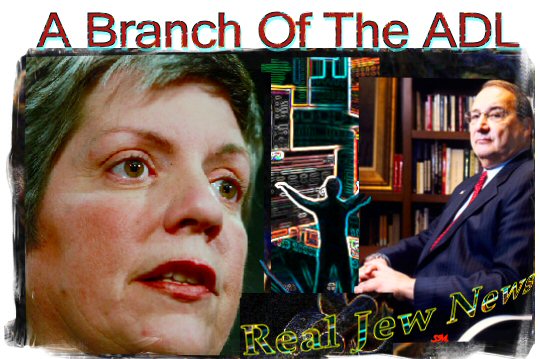 THE US DEPARTMENT OF HOMELAND SECURITY IS NOW FUNCTIONING as a branch of the Anti Defamation League (ADL) in combating ‘Anti-Semitism’ - which is a deceptive Jewish term employed by US Jewry to deflect valid criticism of Jewry’s evil designs - one of which is to establish a “Jewish-controlled one world government.”

This recent Report by Homeland Security evinces yet another incident of the expansion of Jewish control over the American government.

The ADL has been trying to limit freedom of speech on the Internet for over three years running, and has already infiltrated US police forces throughout the nation, training Gentile police to turn against their own, in order to protect “Zionist Jews,” whom publicists have demonstrated in various articles, have a supremacist attitude toward non-Jews.

The question is, “Is there any good news coming out of this even further Jewish control of American governmental offices?” The answer is, “Yes.”

THE CATHOLIC NATIONAL LAW FIRM, known as, The Thomas More Law Center, has filed a federal complaint against the Zionist shill, Janet Napolitano, and her Jewish-controlled, US Department of Homeland Security.

In a statement issued by the law firm, entitled, Janet Napolitano Is Lying To Americans About Her Department’s Rightwing Extremism Report, the Law Center outlined its complaint against Napolitano, stating that her report “violates the civil liberties of combat veterans as well as American citizens by targeting them for disfavored treatment on account of their political beliefs, labeling them, ‘right-wing extremists.’” View Entire Story Here

Jews fear this world-view more than any other philosophical ideology in today’s world. And that’s why Jewry wants TOTAL control of not only our lives - but now - even our very mouths…