A Jewish Police State Is Coming

A Jewish Police State Is Coming, Jewification Of America Articles 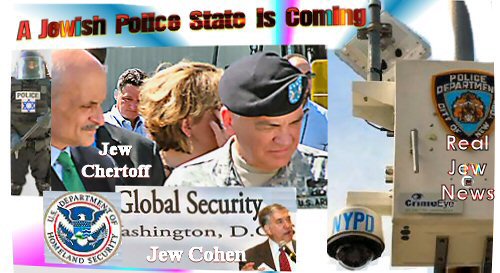 Or Send Your Contribution To:
Brother Nathanael Kapner; PO Box 547; Priest River ID 83856
E-mail: bronathanael@yahoo.com
THE JEWS WHO RUN the US Department Of Homeland Security now have in their possession police technology imported from the fascist state of Israel.

Already, the Talmudic Jew, Michael Chertoff, the head of the DHS, has made a secret deal with Israel disguised as the “Maryland/Israel Homeland Security Partnership” which will be used against Americans who are sick & tired of the Jewish cabal here in America.

This Declaration will include collaboration with the US Department of Homeland Security now working with Canada concerning “security issues” with respect to the pending NAFTA Super Highway. Over 20 US States to date have signed formal agreements with Israel to utilize Israeli police technology.

Here Are The Jews Of US Homeland Security Who Will Police Americans:

Michael Chertoff: This Jew is the Secretary of US Homeland Security. Chertoff is a Talmudic Jew who looks upon Gentiles as sub-humans. A dual citizen of Israel & the US, Chertoff has a primary loyalty to Israel since Jews serve their own interests before those of their host nation.

Paul A. Schneider: This Jew is the Deputy Secretary of US Homeland Security.

Fred L. Schwien: This Jew is the Secretary of Operations of US Homeland Security.

Jay M. Cohen: This Jew is the Secretary for Technology of US Homeland Security. (This Big Brother Jew is the one who will embed a micro-chip into your wrist or forehead).

“As Soon As You Walk Into The Airport” reports Computer World “the machines will be watching.” Here’s More:

– “The system will size you up at the security checkpoint. An array of sensors — video, audio, laser, infrared — feeds a stream of data about you to a central computer.

The system interprets your gestures and facial expressions, analyzes your voice and probes your body to determine your temperature, heart rate, and respiration rate — all in an effort to determine whether you are trying to deceive. Fail the test and you’ll be pulled aside for a more aggressive interrogation.

This scenario may sound like science fiction but the US Department of Homeland Security is deadly serous about making it a reality by 2012.” – (Computer World) 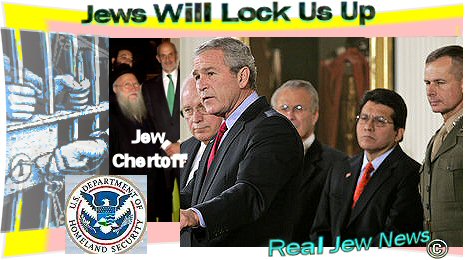 JEWS WILL IMPRISON CITIZENS
VIA THE MILITARY COMMISSIONS ACT

IN THE FINAL HOURS before Congress adjourned in 2006, President Bush signed the Military Commissions Act Of 2006. In doing so, the Constitution was violated and the principle of habeas corpus which protects against unlawful and indefinite imprisonment was thrown to the wind.

Section 6 of the Military Commissions Act strips those declared an “enemy combatant” of the right to be heard in court to establish his or her innocence as guarded by the Constitutional principle of habeas corpus. This Act violates Article I, Section 9, Of The US Constitution:

— “The privilege of the writ of Habeas Corpus shall not be suspended unless when in cases of rebellion or invasion.” —

Presently, the suspending of habeas corpus will be applied to “non citizens.” But once one class of people is deprived of their rights it’s only a matter of time before other groups are also deprived. Moreover, the Act’s “enemy combatant” designation applies to both Americans & foreigners.

Thus by establishing Military Tribunals for “enemy combatants” - the Military Commissions Act puts the US Military in control of American citizens.

This Tyrannical Law Has Been Created To Fight That Ever Present Boogey Man:
The So-Called War On Terror

And It Is The Anti-Christian Jews Of US Homeland Security
Who Will Imprison Christian-Americans
Critical Of Their Agenda Unless We Stop Them Now!

And:: “The War On Terror Is A Jewish Hoax” Click Here