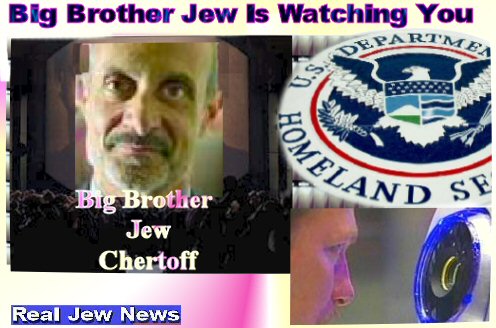 BIG BROTHER JEW IS WATCHING YOU
@ US HOMELAND SECURITY!

And these 4 Christ-hating Jews want to:
- micro-chip- embed you.
- face-voice-eye- scan you.
- DNA- gather you.
-Internet use- track you.
-Checking Account-Credit Card use - trace you.


The Jews at US Homeland Security have a nice sounding hi-techy word for all of these spying devices: “Biometrics.” 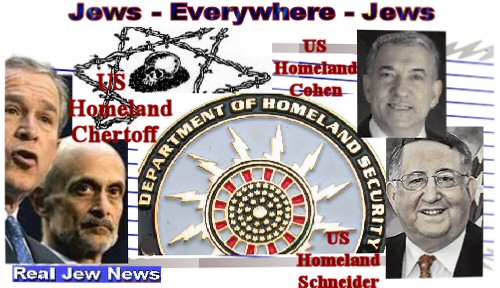 Paul A. Schneider: Deputy Secretary of US Homeland Security.

Jay M. Cohen: Under-Secretary for Science & Technology of US Homeland Security. (This Big Brother Jew is the one who will embed his micro-chip into your wrist or forehead). 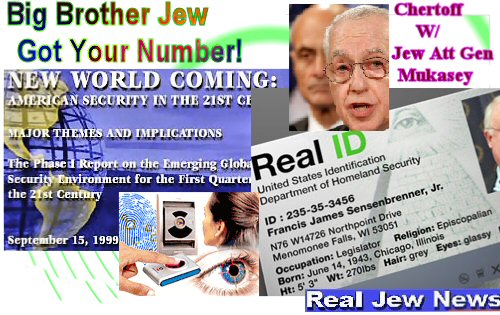 RFID Chips: These have been used in stores like Wall Marts for a few years now. The RFID Chip is inserted into merchandise to track inventory.

Biometric Chips: These can be sewn into the skin. The Biometric Chip has been utilized by parents to track their children whom they fear may be lost or kidnapped.

Finger Print Scan: Some Public School Systems have begun using the Finger-Printing Scan for their School Lunch Programs to determine paid-in-funds available for each student’s cafeteria use.

The Jew Michael Chertoff, Secretary of US Homeland Security is now warding off many protests of his Real ID Card scheduled for enactment any day now.
See: “Electronic Privacy Information Center” Here 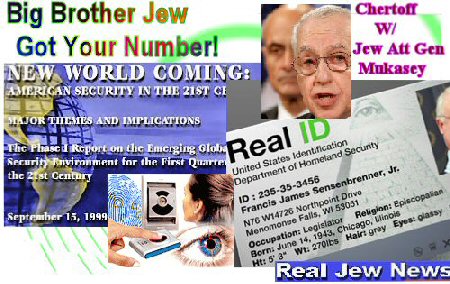 IN 1998, FOUR YEARS BEFORE the so-called attack on the World Trade Center, the Jew-run Council of Foreign Relations (CFR) drafted their CFR Commission Report on National Security.

The CFR Commission Report was done in three phases. Phase III finalized the Report in January of 2001. The Report laid out the framework of the US Homeland Security program:

* Phase II developed a strategy that would deter and defend against terrorist attacks.

Phase III also recommended the reforming of government structures and processes to enable the U.S. government to implement anti-terrorism strategy that would necessitate “departing from the embedded routines of the last half-century and thus require new legislation.”

COMMENTARY: The stated need for the U.S. “departing from the embedded routines of the last half-century” refers to the final elimination of Constitutional checks and balances, and individual state sovereignty.

Both federal and state legislators have abrogated their legislative duties to a dictatorial executive - the President. And the US Executive Office is run by Jews, everywhere, Jews! Big Brother Jews like Chertoff of US Homeland Security! Whippee!

The ‘required legislation’ that the Report recommended has and is being passed with lightning speed through the U.S. Congress, and most dangerously by State legislatures and local elected officials who have no clue that they are voting for their own demise.

### Within days of the event, Bush announced the creation of the Office of US Homeland Security. But it was ready and waiting, compliments of the Jew-run Council on Foreign Relations!

World Jewish Zionists had long awaited this day when their Anti-Christ orders would be carried out by elected political leaders of our once Christian America!

For The Full Outline See: Excerpts From and Comments On The
CFR Phase Report on National Homeland Security
Here

For The Full CFR Commission Report/21st Century See: The Report of the U.S. Commission on National Security Here

HOW DO WE STOP BIG BROTHER JEW FROM WATCHING YOU?

Here are 3 options you can choose from:

Option #1. Find a island in Greece to move to.

Option #2. Never use the Internet, don’t shop at Supermarkets, don’t use checks, stop driving, stop using credit cards, don’t use your voice when on the phone, wrap a towel around your face and wrists, and never ever say the word “Jew” or “Zionist” again.

Option #3. Ask the Lord Jesus Christ to bring the Jews to the brink in which they will either have to repent of their Anti-Christ schemes - or have Christ’s judgement fall on their wicked heads!