A Military Dictatorship Coming To America

A MILITARY DICTATORSHIP
COMING TO AMERICA

THE WORSENING ECONOMIC CRISIS has prompted the US Army War College to issue a report urging the use of military troops to contain possible civil unrest throughout America.

Entitled, Strategic Shocks in Defense Strategy Development, issued on November 4, 2008, the report argues that the US military must prepare for a “violent domestic dislocation provoked by an economic collapse.”

The report was authored by Nathan Freier, an Army lieutenant-colonel and professor at the US War College in Carlyle PA - the Army’s main training institute for prospective senior officers. Freier consigns dissenting Americans to the category of “hostile groups:”

“Civil unrest would force the defense establishment to maintain domestic order. Under certain circumstances this would include use of military force against hostile groups inside the United States.” View Entire Report Here.

Zionist Jews who control America’s banks also have a stake in a militarist usurping of America’s civilian realm. On November 22, 2008, Treasury Secretary Henry Paulson, former CEO of the Jewish investment bank, Goldman Sachs, threatened Congress of martial law if they did not pass a bailout bill. Because Jews fear an “Anti-Semitic” backlash during an economic downturn, an imposition of martial law would be welcomed by US Jewry.

Preparing to implement martial law, on December 1, 2008, the Pentagon announced its plans to deploy 20,000 uniformed troops inside the United States by 2011 to help state and local officials respond to emergencies. 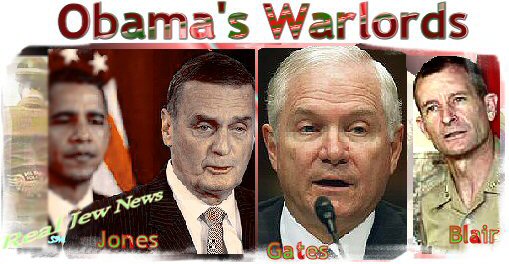 OBAMA BOWS TO THE PENTAGON

PUPPET-PRESIDENT BARACK OBAMA has appointed 3 four-star military officers to his cabinet since his election on November 4, 2008. With Obama’s choice of Admiral Dennis Blair as Director of National Intelligence, Robert Gates at Defense, & General James Jones at National Security, the launching of a military dictatorship is now in place in Obama’s fascist administration.

The leading warlord in Obama’s cabinet is Defense Secretary, Robert Gates. Gates answers to the powerful Trilateralists, David Rockefeller and his 80 year old protege, Zbigniew Brzezinski. The Trilateralist global agenda is presented in Brzezinski’s book, The Grand Chessboard. In Brzezinski’s call to escalate US military power, democracy is a hindrance to his militaristic goals:

“Democracy limits the use of America’s power - especially its capacity for military intimidation. Pursuit of military power is not a goal that commands popular passion except in conditions of a sudden threat to domestic well-being. Democracy is inimical to military mobilization.” View Entire Story Here & Here.

Obama is fully subservient to his masters of “military mobilization” - Brzezinski, Rockefeller, Gates, Blair, and Jones. Spelling out his subservience to the Pentagon, on December 1, 2008, Obama declared, “To ensure prosperity here at home, we must maintain the strongest military on the planet.” To this end, Obama has pledged to increase the size of US ground forces by 100,000 soldiers.

Portending a full militaristic culture in America, Obama’s Chief of Staff, the Zionist Jew, Rahm Emanuel, has called for compulsory service for Americans ages 18 to 25. Service would include three months of basic training & civil defense preparation. Emanuel has also said he sees no reason why ALL Americans should not do national public service.