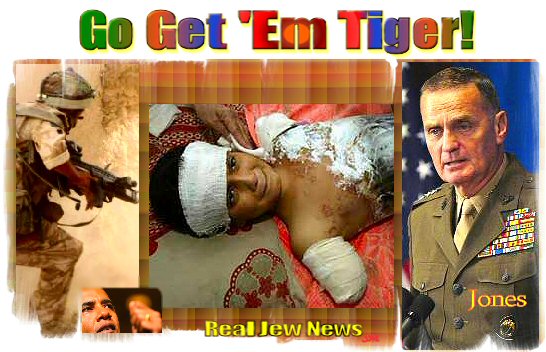 Obama’s selection of militarist General Jones signals yet another defection from his campaign promise for ‘change.’ The appeal of Obama’s campaign had been his opposition to the War in Iraq and a promise for a rapid withdraw of US troops. Yet Jones, in his ‘retired’ role as Chairman of the Independent Commission on Security Forces of Iraq, spearheaded the “Iraqi Surge” of increased US troops in Iraq in 2007.

The “Iraqi Surge” (an utter failure in spite of how the Jewish-occupied press spins it) was part of a planned strategy by the military establishment, of which Jones is a leading figure, & the neocon Jewish ‘think tank,’ The American Enterprise Institute.

General James L Jones also has the dubious achievement of engineering the NATO bombing of Serbian civilians in 1999 when he served as NATO’s Supreme Commander while leading the American operation in Kosovo.

“IF WE DON’T SUCCEED IN AFGHANISTAN,” asserted General Jones in a recent study by the Atlantic Council Of The United States, “we’re sending a clear message to terrorist organizations that the US can be defeated.”

Apparently, General Jones has his warmongering heart set on winning a “symbolic” war against the people of Afghanistan, rather than protecting America’s security at home:

“The US has taken its eye off the ball in Afghanistan due to its focus on the war in Iraq. Symbolically, Afghanistan is more the epicenter of terrorism than Iraq. The consequences of failure in Afghanistan are just as serious as they are in Iraq.” View Entire Story Here.

What we have here is a failure to communicate, dear General Jones. The function of the US National Security Advisor is to protect our nation’s security, not to wage symbolic wars.

A symbolic victory in Afghanistan will only send a “clear message” to the maimed & murdered children of Afghanistan that Amerika’s security depends on the genocide of defenseless civilians living thousands of miles away.