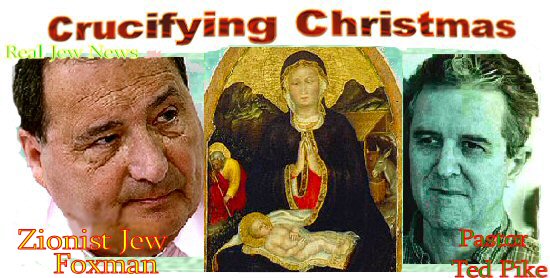 For The Best Post Election Coverage CLICK: Rense.com Here
___________________________________
“WE MUST NOT ALLOW THE JEWISH ADL to dictate what our national holidays should be,” warns Reverend Ted Pike of Truth Tellers in his recent article entitled, The ADL’s December Dilemma.

Exposing the Anti-Christian propaganda of the Anti Defamation League, Reverend Pike says that the ADL is spreading the lie in their massive anti-Christmas campaign that Americans are in a “dilemma” regarding how to “celebrate” the holiday season.”The only ones in a dilemma,” points out Reverend Pike, “are the Jews of the ADL.”

Targeting America’s young children with pictures of Chanukah menorahs (no Nativity scenes) in their annual Press Release dubbed December Dilemma, the ADL offers “help” to “confused” Americans on “choosing appropriate holiday activities” so that no one feels uncomfortable because their religious background is different from others.

Reverend Pike astutely observes that since the majority of Americans claim Christianity as their religion, it is the Jewish supremacists who “feel uncomfortable” because they have another goal in mind, namely, eradicating Christian values from American culture.

The ADL, which Reverend Pike believes is hell-bent on denying our rights of free speech through their promotion of “anti-hate laws,” quotes the First Amendment to make their case. “The First Amendment,” the ADL writes, “prohibits the government from endorsing any particular religious point of view.” This is another outright lie by the ADL.

WITH JEWISH MENORAHS DISPLAYED INSTEAD OF NATIVITY SCENES during Christmas, Jewish supremacists are now pushing for a ‘multi-cultural’ representation during the Christmas season.

Once such incident took place on December 14, 2008 in Armonk, New York, just 30 miles north of Manhattan. The town supervisor, an elected Jewish official by the name of Mss Reese Berman, required that an Islamic “Star & Crescent” be added to a Jewish Menorah ornamenting the town’s public Christmas tree. But nowhere was a Christian Cross to be found gracing the tree. And of course, the Jewish-pandering press article took the ADL line, spinning the incident in favor of “tolerance” and “inclusion” of all cultures and religions.

Another war-on-Christmas event took place on December 2, 2008, when a Jewish attorney for the ACLU by the name of Katie Schwartzman, threatened to sue the town of Ponchatoula, Louisiana, unless they “take down or change” the Christmas Cross annually displayed in the center of the town.

Mayor Bob Zabbia was forced into changing the Cross into a placard for pinning up public events. “City officials don’t agree with the ACLU,” the mayor told the local TV station, “but we realize that we would not win and lawsuits are very costly.”

Thus the Jews continue to turn the Christmas holiday into a “multi-cultural,” “multi-religious,” “secularized” event. For the promotion of the diversity of cultures & religions creates a plethora of disorganized minorities wherein the powerful, wealthy, and very organized minority of Jews gains control over the American masses.

GO TELL IT TO ISRAHELL

WITH OFFICES LOCATED IN EVERY PART OF THE GLOBE, the ADL has its showcase office in Israel’s capital, Jerusalem.

In a December 2008 interview with Haaretz News, Abraham Foxman was asked, “What exactly are you doing from your Jerusalem office with regard to prejudice and discrimination in Israel?”

Abraham Foxman answered with a vague reply, “The ADL engages in providing expertise in dealing with prejudice and discrimination within Israel.” That’s about as “exact” as Foxman gets with regard to his beloved racist, apartheid State of Israel.

But Reverend Ted Pike is very “exact” when he puts forth what a balanced policy toward minority faiths should be during religious holidays:

“During Chanukah, the ADL does not demand that Israel guarantee just as much exposure be given to Christian minorities. The ADL does not insist that Christian Crosses be displayed alongside menorahs at the Tel-Aviv airport. No, the ADL believes Israel is somehow different than America.

Truth is, the ADL is not really concerned with the hurt feelings of religious minorities. Such is the manufactured ‘dilemma’ which the ADL exploits to help achieve their real goal - taking Jesus Christ not only out of Christmas, but out of American public life and values as well. For the ADL wants to secularize America and the world so that Jewish supremacist values may rule unchallenged.” View Entire Story Here.

Having grown up as a Jew, I can attest to the truth of Reverend Ted Pike’s assessment of what the real goal of the ADL is. Zionist Jews fear Christianity more than any other force in their pursuit of domination & control. For the Christian religion admonishes Jews (and all peoples) to repent of their sins and conduct. This is something Zionist Jews find not only abhorrent, but destructive to their agenda to be masters of the world.

And: Anti-Christ Jews Are Finishing What They Started Click Here

And: Reclaiming America’s National Identity From The Jews Click Here