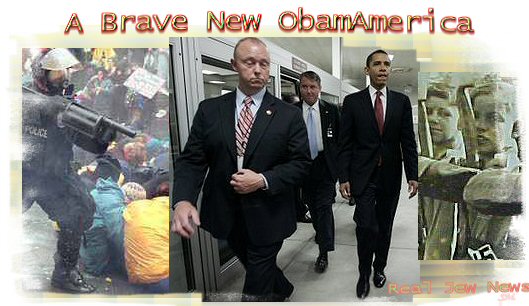 For The Best Election Coverage CLICK: Rense.com Here
AN ALARMING SPEECH by Barack Obama took place on March 12 2008 in which Obama outlined his plan to “safeguard America’s security.”

Obama’s speech, titled, Obama’s National Security Speech, was given in Chicago in the presence of a group of retired US admirals & generals who came forth to “endorse” Obama.

In outlining a program for ’safeguarding America’s security,’ Obama set forth a frightening venue for a Brave New ObamAmerica:

“We have yet to finish the fight against Al Qaeda. We cannot tolerate any safe-haven for terrorists who threaten America. We must use all elements of national power to combat the threats of the 21st century.

We must increase our capacity to put boots on the ground. *We need to give our civilian agencies the ability to operate alongside our military.* Yes - *we must inspire a new generation of Americans to serve in a civilian capacity.* View Entire Story Here & Here.

Obama has specifically called for a paramilitary “civilian national security force” made up of American youth “just as powerful, just as strong, just as well-funded” as the US military…

ON JULY 2 2008 Obama gave a speech in Colorado Springs calling for a paramilitary civilian force he called, The AmeriCorps. Reminiscent of Hitler’s Youth Program, Obama wants to turn America’s youth into young fascists and spies:

“September 11 2001 was a defining moment in the history of America. That’s why Americans lined up to give blood and flew flags. We were ready to answer a new call for our country. But the call never came.

We have lost precious time. Our nation is less secure. The burden of service has fallen on our military. As President, I will ask for your service as active citizens.

I will call on a new generation of Americans to join with our military. Today, AmeriCorps – our nation’s network of local, state and national service programs – has 75,000 slots. As President, I will expand AmeriCorps to 250,000 slots.

On October 20 2008, Obama welcomed the endorsement of former US State Department chief, Colin Powell. In a telling remark, Obama applauded Powell as a “great soldier who will inspire millions of young people to serve their country.”


And: Obama ‘Lies’ For His Wall Street Handlers Click Here