Putin’s Or Jewmerica’s Plan For Ukraine 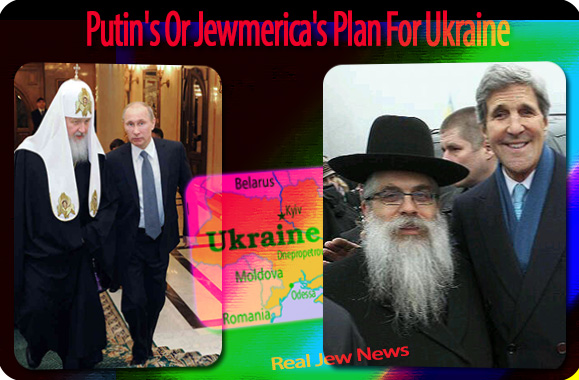 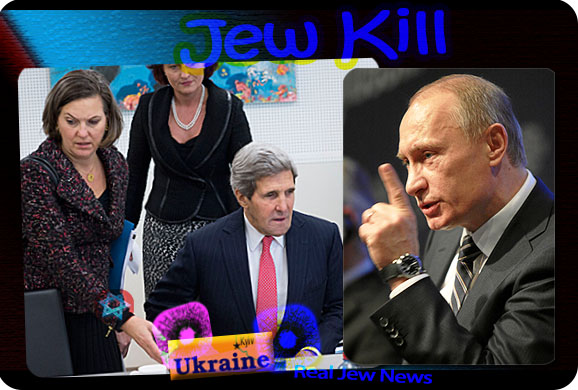 ALL THE MISCREANTS… both players and pawns of Jew-ruled America, are acting out their parts center-stage in the crisis in Ukraine.


Whether its Kerry of the Jew-infested State Department; Nuland of the Jew-led neocon cabal that sets foreign policy in Jew-ruined America; or Yats the Yid, Jewmerica’s shill in Kiev; their aim is the same: the extirpation of Ukraine’s sovereignty.

Ukraine is splintering into opposing factions and Jewmerica couldn’t be more pleased.

Balkanization of a nation plays into Jewry’s hands as it creates fissures and weak pockets vulnerable to Jewish control.

Is not weakened-Kiev’s willing subjection to the Jew-owned IMF proof enough of Jewry’s profiteering from its attempted divide and conquer operation via the Maidan?

The key that unlocks Jewmerica’s agenda in Ukraine is provided by the Jew-ridden State Department’s “Silk Road” Policy Statement.

Entitled, “U.S. Support for the New Silk Road,” the Statement asserts Jewmerica’s design for full spectrum dominance throughout “South and Central Asia,” that is, the Eurasian geopolitical bloc. 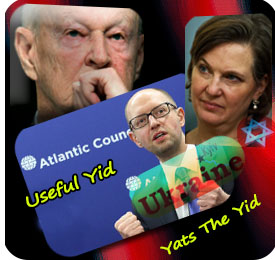 Surely, the Russia-hating Brzezinski has made his mark in Jewmerica’s foreign policy with his “Grand Chessboard” strategy where the final goal is Jewmerica’s hegemony over Central and South Asia, Russia’s soft Eurasian underbelly:

“Ever since the continents started interacting politically, Eurasia has been the center of world power. It is imperative that no challenger dominates Eurasia and thus of challenging America (Russia),” says Brzezinski.

The people of Ukraine are simply useful tools in the hands of Jew-ruled America.

Putin’s Eurasian Union, which he calls, “A Future Born Today,” promises to bring prosperity to all of Russia’s allies. This is why Germany’s business community opposes Jewmerica’s “sanctions” against Russia.

Germany has much to gain via Putin’s Eurasian Union which (in saner anti-Jewish times) would establish Ukraine as a trade bridge between Europe, Russia, and China. 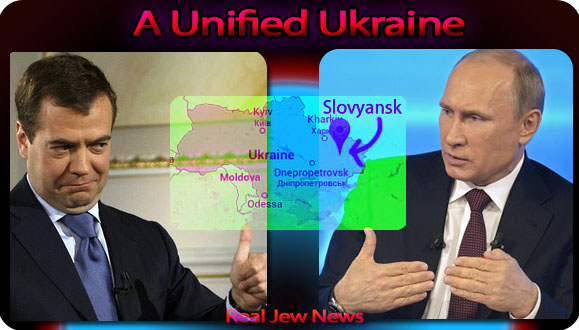 AS AN ORTHODOX CHRISTIAN, Putin subscribes to the Byzantine model of a commonwealth of inter-connected peoples.

Putin outlined his vision for Ukraine in his 2013 speech, Orthodox-Slavic Values, while visiting Kiev.

Absent of any intention of “annexing” Ukraine, Putin affirmed that a sovereign and unified Ukraine tied to Russia both economically and culturally would realize the Orthodox vision of peoples working together in harmony.

Putin’s national-patriotism is of a different kind than “racialist-centered” nationalism.

His patriotism accommodates 153 different ethnicities of four major religions who are all Russian citizens; who are historically part of Russian culture and society, particularly the Muslims; and have contributed to the supra-national or imperial identity of the Russian Federation. 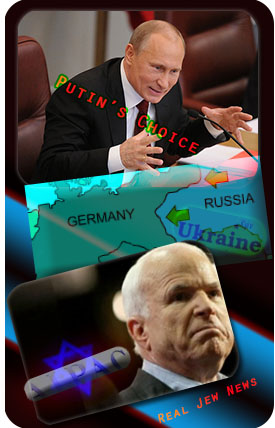 Jew-enabled warmongers like McCain try to discredit Putin for once saying, “The collapse of the Soviet Union was a major geopolitical disaster where tens of millions of our co-citizens found themselves outside Russian territory.”

Putin wasn’t yearning for a return to the atheist Soviet system or hopes of a future empire, but lamenting the fragmentation of the unity of the former Russian geopolitical bloc made up of many races, religions, and ethnicities.

“Federalization” of Ukraine, according to Putin, would grant its various “ethnic-differentiated’ regions protection against Western-influenced Kiev while ensuring a unified Ukraine.

Putin’s support of Syria, Iran, and his esteem for Marie Le Pen’s French National Front, Hungary’s Jobbik, and Nick Griffin’s BNP—in their quest for independence from Jewmerica—underscores his vision that national interests should displace a global policeman’s (America’s) interests.

Jew-ruled Kerry would like nothing more than to bait Russia into getting bogged down in a “guerrilla warfare” quagmire with the Right Sector in Eastern Ukraine.

Putin won’t fall far it. He’s got bigger fish to fry. A “Silk Road” of his own joining Germany and China through Russia is in the making.

Checkmate! …Jewmerica’s ‘grand chessboard’ is falling through the cracks.