How The IMF Will Loot Ukraine 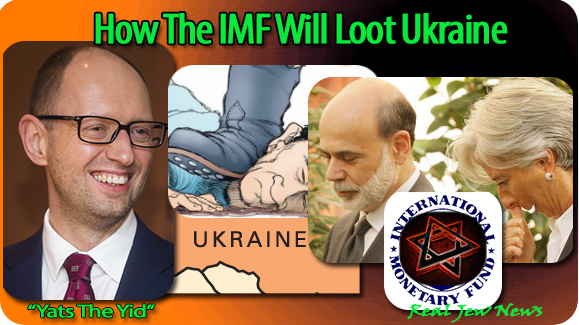 How The IMF Will Loot Ukraine
By Brother Nathanael Kapner March 2, 2014 © 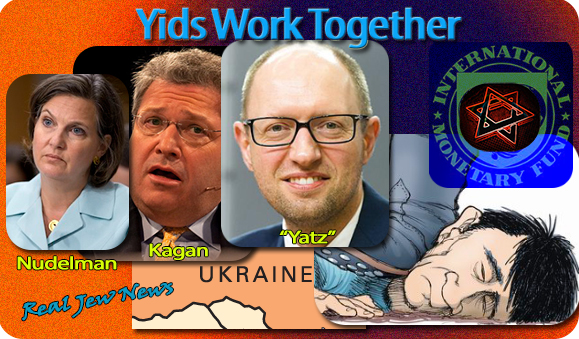 
The IMF, as an organized arm of Jewish banking, has two jackboots. Alternately they trample on the people. They work in a coordinated cadence.

First the left jackboot reels out the credit and hooks the impoverished and desperate borrower on the credit bait.

This is the loan phase. It’s a soft kick with honey-coated poison as its bait.

When the debtors, like Ukraine, abandoning help from Christian Putin, can’t service the debt, they reel them in with the right jackboot of austerity, cutting pensions and social services, devaluation of currency, higher taxes and utilities, foreclosure and privatization.

This is the looting phase. Inflation and recession don’t cause loss. They cause transfer to Jews.

“Yatz” vows that Kiev will meet all the demands that the Washington-based IMF wants to enslave Ukraine with.

That’s how the looting begins, with a head of State begging for money who is soon handed a restructuring agreement, pre-drafted for ‘voluntary’ signature.

Yatsenyuk has already initiated IMF’s “help,” that is, “looting,” by imposing limits on cash withdrawals to $1400 a day on checking accounts and $335 a day on ATM withdrawals. A sneak-preview of “bail ins” HAS begun.

With enslavement guaranteed, one asks, “What will the IMF target for looting?”

The industries, linked with Russia since Soviet days, located in Russian-leaning Eastern/Southern Ukraine of which Western Ukraine is dependent for domestic goods and tax revenue, that’s what.

It’s not for “looks” and “provocation” that pro-Russian militias and barricades are popping up throughout entry points into Eastern Ukraine. 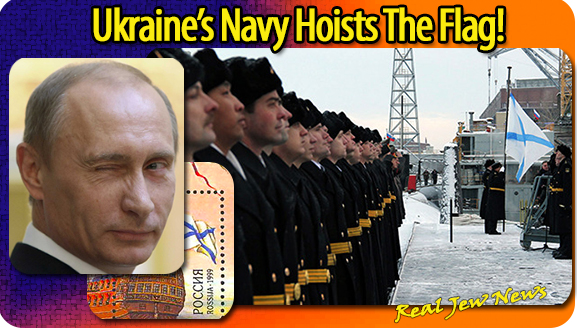 RUSSIAN INTERESTS abound in Eastern/Southern Ukraine of which Putin will act according to Russia’s 2010 Military Doctrine.

“If there is a direct threat to our national interests we will defend ourselves,” said the National Security Council upon issuance of the Doctrine.

Indeed, there IS a threat to Russia’s national interests in Ukraine. Nuland’s JewSA wants to weaken Russia’s regional and global influence via a three-pronged attack:

Second, Yats The Yid’s deputy prime minister just called for the cancellation of Russia’s lease, known as the Kharkiv Agreements. 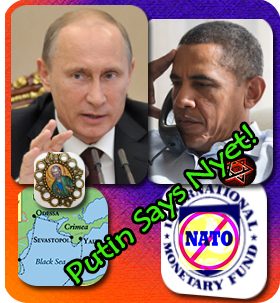 Putin will not allow this to happen. His warm water access to Iran, Syria, and Egypt depends on it. He’s acting fast, catching the JewSA with its pants down as he did in South Ossetia in 2008.

Both houses of Russia’s parliament, The Federation Council, has unanimously (even his political enemies) granted Putin the authority to deploy Russian troops into Crimea where the majority are loyal Russian Orthodox Christians.

The Council is apparently enraged with Obama’s veiled threats to further destabilize Ukraine and that if Russia uses military force it would “pay the costs.”

Before the vote took place, Russian senators said that Obama had threatened Russia and insulted the Russian people. They demanded that Putin recall the Russian ambassador to the USA.

Not only are Putin’s political enemies rallying behind him to protect Russia’s economic, military, and social interests in Crimea, but even Ukraine’s Navy Flag Ship is siding with Russia. The ship has hoisted the Flag of St Andrew, the ensign of the Russian Navy.

Kiev’s illegitimate ‘acting president’ made a BIG mistake in sacking Admiral Yuri Ilyin as Chief of Staff. The Navy struck back.

Apparently, they don’t want JEWS ruling and looting their country…and Putin WILL protect Russia’s interests against the designs of the Jew-ruled West.