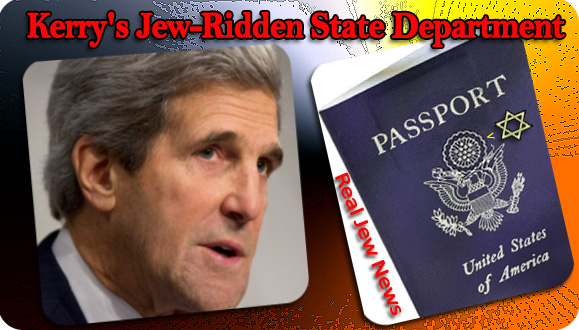 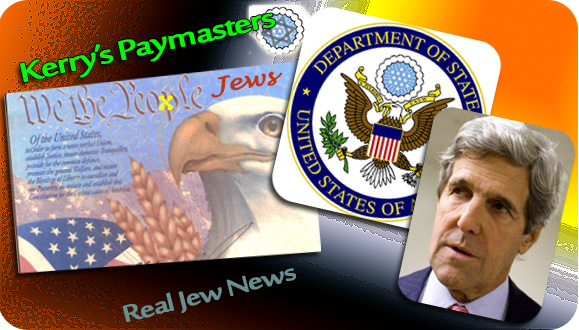 WITH JOHN KERRY’S plan to aid Syrian terrorists, it’s time we exposed the State Department as a Jew-ridden organ of the Jewish Lobby.


It’s a well-known fact that the Syrian ‘revolution’ is a dire threat to the centuries-old Christian population. But when it comes to pleasing the Jews, Kerry couldn’t care less.

Added to Kerry’s Jew-pleasing diplomacy, he recently demanded that Erdogan, Prime Minister of Turkey, apologize for calling Zionism a “crime against humanity”…which it most certainly is.

Does he owe the Jews so that off to work for the Jews he goes? Yes indeed.

First of all, Kerry’s paternal grandparents were Jews named Ida Lowe and Fritz Kohn, who like many Jews in order to hide their identity, changed their surname to Kerry.

John Kerry’s father, Richard, (son of Ida and Fritz) was born in the Jewish area of Boston known as Brookline where John Kerry studied law at Boston College. 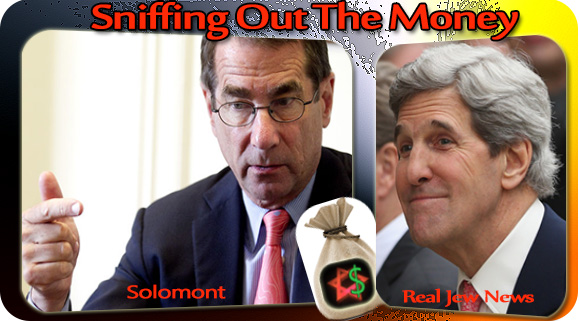 JEW WAY TO THE WHITE HOUSE

IN HIS 2004 PRESIDENTIAL BID, Kerry placed some high-powered Jews on his campaign staff to drive his Jewish ‘money-go-to’ machine.

Alan Solomont, Board member of the Boston Private Bank & Trust Company and Chairman of the Combined Jewish Philanthropies of Greater Boston, was an ardent supporter of Kerry and a key member of his finance team.

Lynn will always be around to remind Kerry of the Jewish dollars invested in his political advancement since he now hangs out in the Jew-ridden State Department where he serves as Senior Policy Adviser. 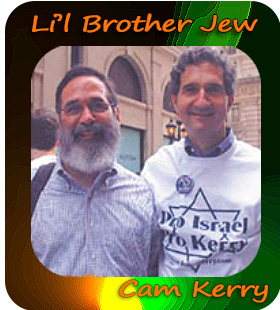 Then we have John Kerry’s brother, “Cam” Kerry, who in 1993 converted to Judaism from Catholicism before marrying Kathy Weinman. (Most converts are women who want to marry Jewish men and not vice versa. Shame on him!)

Cam was awarded for his apostasy by being granted an all-expense paid vacation to Israel by AIPAC in 1994.

Cam soon became a partner of Mintz, Levin, Kohn, a major Boston law firm which represents Israeli business interests and afterwards appointed Vice-Chair of the National Jewish Democratic Council. He now serves as General Counsel for the US Department of Commerce.

Isn’t it nice that John has a ‘Jewish’ brother with ties to lots of Jewish dollars to pay his way?

No wonder our new Secretary of State loves the terrorists in Syria in his drive to topple Assad who is a protector of Syrian Christians.

For when it comes to pleasing the Jews, Christians get the royal shaft and even wiped out of existence. But what does Kerry care, his main purpose in life is to see that Jews get their bidding done. 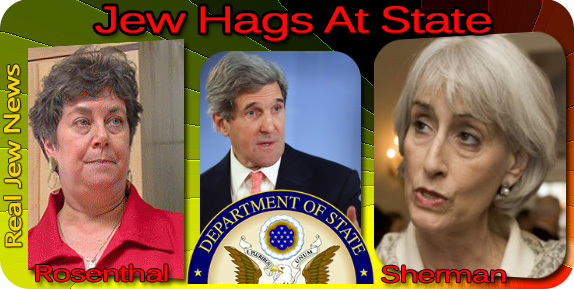 CALL IT LITTLE ISRAEL and you’re not off the mark seeing that the US State Department is infested with Jews.

While Chairman of the Senate Foreign Relations Committee, Kerry knew all too well that the way to keep his job was to keep his Jewish-enablers and the Jewish Lobby happy.

And now as Secretary of State he has lots of Jews looking over his shoulder making sure he tows the Jewish line.

Here’s the Jewish Lineup at State:

• Wendy Sherman - Under Secretary for Political Affairs. Recently met with Shimon Peres assuring him of Jewmerica’s loyalty to Israeli genocide of the Palestinians. 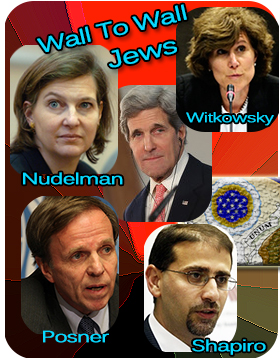 • Hannah Rosenthal - Special Envoy to combat Anti-Semitism. (Your tax dollars hard at work forbidding you to criticize those who rule over you.)

• Philip Goldberg - Under Secretary for Intelligence and Research. (Big Brother Jew is watching and getting background checks on you.)

• Daniel Rubenstein - Principal Deputy Assistant for Intelligence and Research. (Big Brother Jew #2 is watching and getting background checks on you.)

• Jerry Lanier/Anne Witkowsky - Coordinators for Counter-Terrorism. (Big Brother Jew #3 and Big Sister Jew are watching and getting background checks on you.)

• Michael Posner - Assistant Secretary for Democracy and Human Rights. (Bringing Jewish ‘democracy’ and Jewish-inspired bombs to hapless nations around the globe. All at the cost of 7000 dead Gentile American soldiers. NO ‘Posners’ among the dead.)

• Daniel Shapiro - US Ambassador to Israel. Has a GREAT LOVE for the Palestinian people! (Yet not a peep out of him protesting the illegal Israeli settlements…simply not in a ‘Shapiro’s’ blood.)

AND THE LIST…I mean the BEATING of Americans into the drum of Jewish-enabled bloodshed around the world goes on.

And John Kerry will make sure that not one drop of Jewish blood is ever shed.

And: Political Judaism As A World Threat Click Here