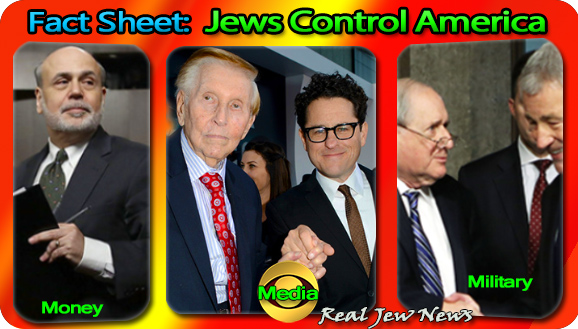 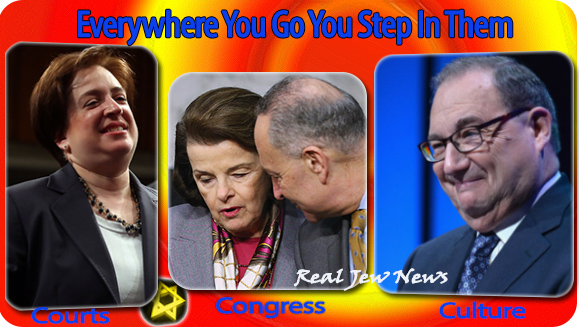 
• The Rothschilds, Goldman Sachs, and Warburgs of Hamburg are primary holders of the Federal Reserve Bank.

• CBS is owned by Murray Rothstein (aka Sumner Redstone).

• NBC is owned by Brian Roberts.

• ABC is owned by Sydney Bass with Robert Iger as CEO. 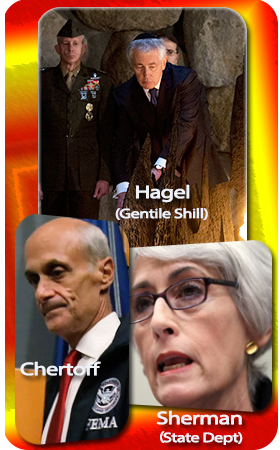 • The US State Department finds Jews in the highest positions of authority.

• Military brass depend on the Jewish-owned Fed for their paychecks.

• Military brass depend on Armaments Manufacturers, whose stocks are underwritten by Jewish Investment Banks, for perks and post-military careers.

• Bowing to the Jews in Israel last month, Defense Secretary Chuck Hagel took the mark-of-the-beast when placing the Jewish Yarmulke on his head. 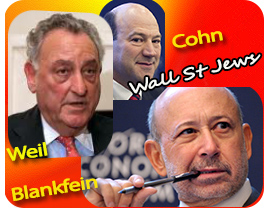 • Jewish Investment Banks like Goldman Sachs and Citigroup underwrite the stocks of American corporations and thus dictate the offshoring of US jobs to China and India for cheap labor and BIG profits.

• The American Federation of Teachers is run by Jews and the ADL has infiltrated the Public Schools, brainwashing young children with homosexual and race-mixing books.

• Jews donate huge grants to the Ivy League Schools and place Jewish personnel in high positions such as David Skorton, President of Cornell and Allan Garber, Provost of Harvard.

• Joe Biden recently “praised” Jewish leaders for growing the Homosexual agenda due to their control of Hollywood and the Media.