How The Jews Took Washington 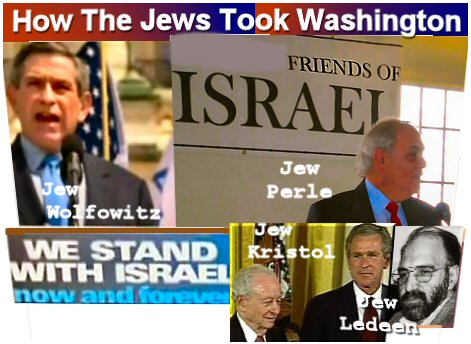 How The Jews Took Washington
By Brother Nathanael Kapner, Copyright 2007-2011

A JEWISH POLICY is now the central mark of American foreign policy. Why do I say this? Because 4 Jews are dictating American Foreign Policy to President George Bush:

These Jews call themselves “neoconservatives.” But these Jewish neocons are really not “conservatives” in the strict sense of American conservatism. They are, rather, primarily “Jews.” And it is a Jewish cause, namely, Zionism that these 4 Jews are installing as the key component of George Bush’s Foreign Policy.

Although these Jews are promoting Zionism, none of them live in Israel - nor do they have plans to. This is because Zionism for Jews is simply having a place to escape to once a persecution (always justified) breaks out against them.

The neocon Jews tell Americans that they are advancing democracy. They tell Americans that their children should go to war to help advance that “worthy” cause. But what this love of democracy really means for the Jewish neocons is a love for the billions of dollars that America spends on lethal weapons earmarked for Israel so that Israel can defend “democracy” by burning little children’s faces in Lebanon and the Gaza Strip.

The Jewish neocons began their takeover of Washington when Irving Kristol, the godfather of the movement and the founder of Commentary Magazine, (widely read by Jews and politicians on their payroll), in a series of articles written in the early 1990’s, launched the Jewish neoconservative agenda:

— “The historical task and political purpose of neo-conservatism is to convert the Republican Party and American conservatism in general, against their prospective wills, into a new kind of conservative politics suitable to governing a modern democracy.” —

The above can only be said by those who are in control. - Next came phase II of their takeover of Washington through the use of the Jewish controlled Media. The New Republic, The National Review, Commentary Magazine, The Weekly Standard, and most important, the editorial page of the Wall Street Journal began publishing tutoring sessions to convert, (against their wills), the Republican party and American foreign policy makers. In a 2003 offering, Irving Kristol compared the US of today with the old Soviet Union:

— “Large nations, whose identity is ideological, like the Soviet Union of yesteryear and the US of today, inevitably have ideological interests in addition to more material concerns.

The US will then always feel obliged to defend a democratic nation under attack from non democratic forces, external or internal. That is why we feel it is necessary to defend Israel when its survival is threatened. No complicated geopolitical calculations of national interest are necessary.” —

Suddenly America is an “ideological” nation rather than a “Christian nation” founded by a particular ethno-cultural group of Western Europe that should preserve its Christian heritage.

Secondly, Irving Kristol cannot be ignorant that America has supported many non democratic nations. In the Cold War the US welcomed as allies, Chiang Kai-Shek, Franco, Somoza, President Marcos, the Shah of Iran, and militarists in Turkey.

The Courting Of George Bush

GEORGE BUSH PRIOR TO 2000 seemed to be unaware of foreign policy issues. In his 2000 election drive he confused Slovenia with Slovakia, could not name the leaders of at least four nations during an interview, and referred to Greek politicians as “Grecians.”

Because of the American Jewish Lobby Group, American Israel Public Affairs Committee (AIPAC), with their huge contributions to his election campaign, Bush was very happy to accommodate them by allowing their Jewish neocon agents, namely, Paul Wolfowitz and Richard Perle, entry into his entourage.

The Jew neocon Richard Perle expressed his delight, (as Patrick Buchanan put it), “like a Fagan capturing Oliver Twist,” regarding his first meeting with the future President:

And so began the courting of George Bush shortly before he assumed the office as President. Not wasting any time, the Jewish neocons began tutoring George in “a new kind of conservative politics suitable to governing a modern democracy.”

Paul Wolfowitz, b. 1943, was indoctrinated into radical Zionism by his father Jacob who organized pro Zionist activities. Paul Wolfowitz, like every good Jewish son, continued to perpetuate the marks of his Jewish father in his own passionate attachment to Zionism.

In 1992, when Wolfowitz was Assistant Secretary of the Defense, a document entitled Defense Planning Guidance, penned by Wolfowitz and his Jewish deputy, Lewis “Scooter” Libby, leaked out to the Jewish owned Washington Post.

The memorandum called for a permanent U.S. military presence on six continents to deter any “potential competitors from aspiring to a larger regional or global role and to implement an offensive strategy to establish and protect a new order.”

The Wolfowitz Doctrine, as it was called, also stated, “While the U.S. cannot become the world’s policeman by assuming responsibility for righting every wrong, we will retain the preeminent responsibility for selectively addressing those wrongs which threaten not only our interests, but those of our allies and friends.”

Obviously, Wolfowitz was ultimately concerned with the U.S. military redressing all “wrongs” committed against that “ally and friend,” Israel. But what about Kosovo? Do the Jewish neocons really care about redressing wrong of any other nation besides Israel?

The Wolfowitz Doctrine was seemingly forgotten. But in September of 2002, with Wolfowitz and Libby holding key positions in the Bush administration, the memorandum reappeared in an official document entitled The National Security Strategy of the United States.

About The Neocon Jew Richard Perle

Richard Perle, b. 1941, began his political career in 1970 as an aide to the Democrat Senator Henry Jackson. Perle left Jackson in 1980 and was soon named Assistant Secretary of Defense for International Security Policy. In 1996, in collaboration with the neocon Jews Douglas Feith and David Wurmser, Perle wrote a policy paper entitled, A Clean Break: A New Strategy for Securing the Realm:

— “Israel can shape its strategic environment in cooperation with Turkey and Jordan by weakening, containing, and even rolling back Syria. This effort can focus on removing Saddam Hussein from power in Iraq an important Israeli strategic objective in its own right.” —

David Wurmser later waxed even bolder. A resident scholar at the Jewish run think tank American Enterprise Institute, (AEI), Wurmser urged the U.S. and Israel to “await an opportunity to launch pre-emptive strikes, for crises can be opportunities.” Wurmser published this U.S. Israeli joint war plan only nine months before 9/11.

When George Bush became President in 2001, Perle was named chairman of the Defense Review Board; Wolfowitz became the Deputy Secretary of Defense; Feith his Undersecretary; while Wurmser became special assistant to Lewis “Scooter” Libby who was appointed Cheney’s Chief of Staff. All of these Jewish neocons had a similar U.S. defense position: to attack Iraq and eliminate Saddam Hussein, a perceived enemy of Israel.

And how did these Jewish country club buddies acquire their appointments? Because AIPAC, the prime financial donator of George Bush’s election campaign, came collecting on behalf of these Jewish agents who would do their bidding.

RICHARD CLARK, George Bush’s counterterrorism chief, on September 12 2001, returned to his office in a state of alarm after a round of meetings which included Paul Wolfowitz and Donald Rumsfeld:

— “I expected the meetings to be about examining how to deal with Al Qaeda. Instead I walked into a series of discussions about Iraq. I realized with almost a sharp physical pain that Wolfowitz and Rumsfeld were going to take advantage of the national tragedy to promote their agenda about Iraq.” —

On September 20 2007, an open letter was sent to President Bush with forty signatures, including the signatures of Richard Perle, William Kristol, Norman Podheretz, and Jeanne Kilpatrick. It was an ultimatum: To retain the signers’ support, (AIPAC’s re-election $$$), he must target Hezbollah for destruction, retaliate against Syria and Iran should they refuse to sever ties with Hezbollah, and overthrow Saddam Hussein. Failure to attack Iraq, the signers warned Bush, “will constitute a decisive surrender in the war on terrorism.”

But what had Hezbollah, Syria, Iraq, and Iran, had to do with 9/11? Still, the President was given his ultimatum. He must exploit the horror of that atrocity, that “crises,” and channel America’s rage into a series of wars on nations, none of which had attacked the U.S. but all of which were hostile to Israel, or he, President Bush, would face political ruin.

To take advantage of the “crises” of 9/11with its attendant Zionist opportunity, Richard Perle wasted no time in an October 2001 article in the Jewish owned New York Times, warning that time was running out, as Saddam Hussein was getting closer to fully developed nuclear weapons. (It has now come to light that no such weapons ever existed):

— “With each passing day Saddam Hussein comes closer to his dream of a nuclear arsenal. We know Saddam has a clandestine program, spread over many hidden sites, to enrich Iraqi natural uranium to weapon grade uranium. How close is he? We do not know. Two years, three years, tomorrow even?” —

Almost immediately, neocon Jew Joshua Goldberg of The National Review echoed his county club buddy, Richard Perle: “Every ten years or so, the United States needs to pick up some crappy little country like Iraq and throw it against the wall just to show we mean business.” In the article, Goldberg oft mentions the Jewish neocon Michael Ledeen and his Ledeen Doctrine.

The Jewish neocon Michael Ledeen, in his recent book, The War Against The Terror Masters, goes right for the jugular. He shows not hesitation in manifesting the venom of his Jewish arrogance and the Jewish neocon agenda to create a Jewish New World Order:

— “First and foremost, we must bring down the terror regimes, beginning with the Big Three: Iran, Iraq, and Syria. We will remain engaged. We have to ensure the fulfillment of the democratic revolution.

We do not want stability in Iran, Iraq, Syria, Lebanon, and even Saudi Arabia; we want things to change. The real issue is not whether, but how to destabilize.

Creative destruction is our middle name both within our own society and abroad. We tear down the old order every day, from business to science, literature, art, architecture, and cinema to politics and the law.

Our enemies have always hated this whirlwind of energy and creativity which menaces their traditions (whatever they may be) and shames them for their inability to keep pace. We must destroy them to advance our historic mission.” —

THE TIME HAS COME in which more and more American Christians are raising their fists high in the air crying aloud, “Oh ye miserable Jews! How long must we bear your destructive energies wreaked upon us and our Christian nation from within?”