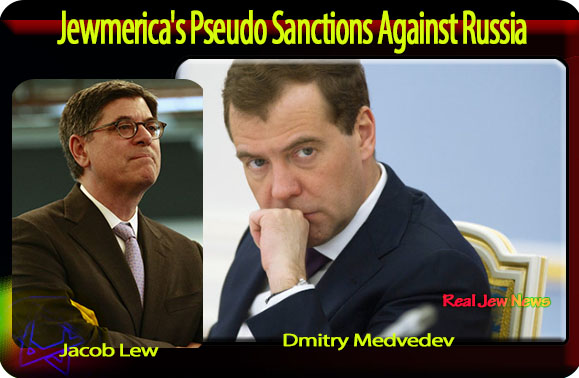 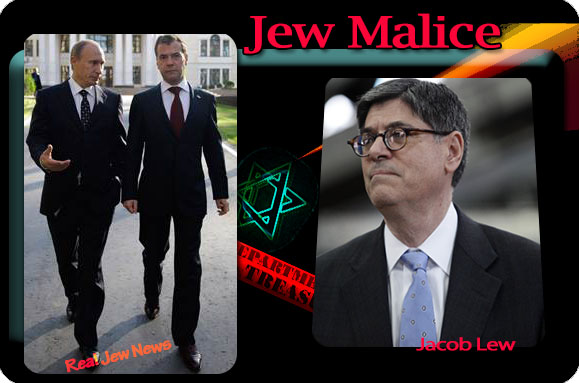 JEW-RUINED AMERICA continues to wage war on Christian Russia…this time with a third round of sanctions targeting Putin’s inner circle.


What makes for an especially ugly scenario regarding Jewmerica’s malice toward Russia is that the “official” announcement comes from US Treasury, headed by the Jew, Jacob Lew.

It appears that Jacob Lew, (an Orthodox Jew) relishes the idea of targeting Putin’s closest advisers as well as the “personal” bank of members of the Russian government.

Jacob Lew, (tribalist Jew that he is), got his Jew assistant, David Cohen, “Under Secretary for Terrorism and Financial Intelligence,” to chime in with a hateful dig on how sanctions are ‘harming’ the Russian economy: 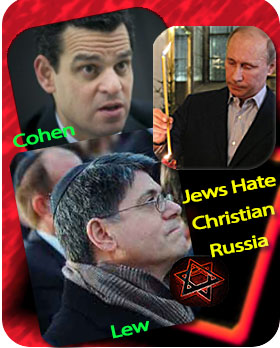 “With its currency at an all-time low, its stock market down twenty percent, and a marked rise in interest rates, Russia is bearing the costs of its unlawful effort to undermine the security, stability, and sovereignty of Ukraine.” View Entire Story Here.

It’s JEWMERICA that has undermined Ukraine’s security, stability, and sovereignty by funding and imposing ‘regime change’ on the democratically-elected government of Kiev.

And rules originally designed to lock terrorists out of the global financial system–now foisted on Russia–are yet another indication that Jews are hell-bent on destroying Russia’s revival of its Symphony of Church and State.

The response from Putin is classic: “Over-reliance can lead to a loss of sovereignty.”

1 • Boosts domestic businesses by bringing offshore funds back to Russia.

3 • Keeps money domestically instead of in offshore tax havens.

The shame of Jewmerica imposing pseudo sanctions on Russia is that America was once a friend and ally of Tsarist Russia, a partner in promulgating the Christian faith.

What’s notable (…now sad due to the Jew-takeover of America) is that the 1832 Russia-US Treaty began with the words, “In The Name Of The Most Holy and Indivisible Trinity.”

But that all came to an end in 1913 when Jewry harassed President Taft out of office for his support of “preferred trade” with Russia and installed their puppet Woodrow Wilson instead…preparing the way for the Jew-owned Federal Reserve.

It’s been all downhill for Jew-ruined America ever since.