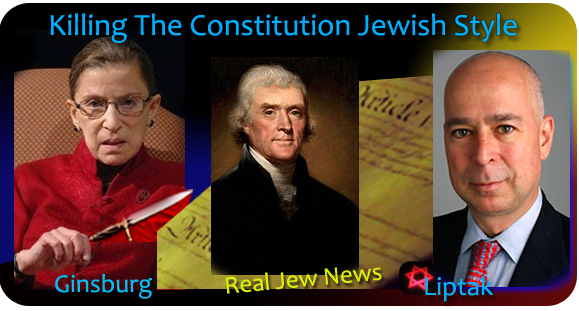 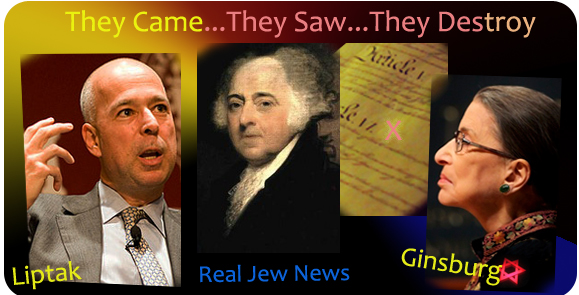 A FEATURE ARTICLE in the Jewish-owned New York Times entitled, “We the People Loses Appeal,” was published on February 6 2012.


The piece, which trashes the US Constitution, was written by Jewish lawyer, Adam Liptak, the Supreme Court correspondent of the New York Times.

Hiding behind his theme that our Republic’s time-honored document is supposedly falling out of favor around the globe, Litpak attacks the US Constitution as being “terse and old.”

The following distillation of “We the People Loses Appeal” outlines Liptak’s main attacks on the US Constitution that evinces a Jewish, anti-American, communist agenda:

— The US Constitution Has Idiosyncrasies Such As The 2nd Amendment —

Here, Liptak insults and disparages those who prize their right to bear arms for having as their “brothers in arms” trigger-happy hooligans from “Mexico and Guatemala.”

Apparently, Liptak’s aim, in concert with organized Jewry, is to strip the “goyim” of their guns.

— The Canadian Charter Is Superior To The US Constitution —

Here, Liptak attacks the US Constitution for “not allowing” (as the Canadian Charter does allow) for “affirmative action.”

Well, of course! Liptak, like his fellow Jews, with the ADL at the lead, who pushed Affirmative Action Legislation, is hell-bent on eradicating the White Middle Class in order for Jewry, a super-wealthy minority, to take control of a two-tiered society: Jews and a lower class. (This is *Jewry’s* agenda. It’s important that whites, blacks, and hispanics understand this.)

— The US Constitution Is A Poor Model For Other Nations —

Here, Liptak is quoting his fellow traitorous Jew, Ruth Bader Ginsburg, who sits on the bench of the Supreme Court of the United States. 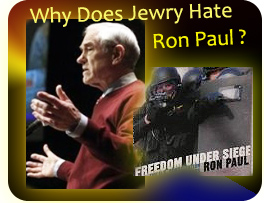 In a recent visit to Egypt, Ginsberg advised the leaders “not to use the US Constitution as a model” when “penning” their own government document.

Two other Jews, whose oath to protect the US Constitution is doubtful given their Jewish sympathies, share with Ginsberg (and likely, her disloyalty to the Constitution), this powerful seat. View Entire Story Here, Here, & Here.

No wonder then that organized Jewry hates Ron Paul—America’s foremost champion of the US Constitution.

For even if Ron Paul wins every primary and caucus yet to come the Jew-owned press would be loath to even mention his name.

THE DEATH OF THE CONSTITUTION occurred while Americans were drinking themselves into a stupor on New Year’s Eve, 2011/2012.

This is the date that Jewry’s “schwartza in the White House,” Barack Obama, signed the National Defense Authorization Act (NDAA) into law.

And why did the majority of Democrat and Republican senators and congressmen vote for this law? Because both political parties are directed by Jews.

Any hope for “change” in our Jew-occupied government is like a starving man dreaming he is dining at a sumptuous meal but when he wakes up he’s still hungry.

The sole-sponsor of the law was Senator Carl Levin, a Jew, and head of the Senate Armed Services Committee. (How did a Jew land this chair…money?)

Levin’s NDAA legislation authorizes in Section 1021 the US military to imprison US citizens for life…without charges, without recourse to trial, and without notification to family and kin. 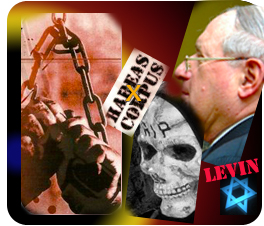 This treasonous, Jew-inspired law destroys once and for all the Constitutional right of the “privilege” of habeas corpus which guarantees the right to be “released” from prison if one believes the arrest was made without legal merit.

Sadly, because the US military is dependent on Jewish Financial Capital — which underwrites and influences the armaments industry as well as owns the Federal Reserve Bank — for its funding, there is little chance that US Generals will bite the hand that feeds them and allow their soldiers to defend American citizens’ Constitutional rights in opposition to Levin’s treasonous NDAA. 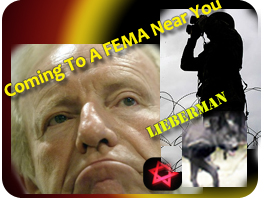 ACTING IN CONCERT with his fellow Jew and traitor is Senator Joseph Lieberman who chairs the Senate Committee for Homeland Security. (How did a Jew land this powerful seat…money?)

In October 2011, Lieberman introduced his Enemy Expatriation Act which would permanently strip an American of his citizenship without conviction if suspected of “supporting hostilities” against the “homeland.” (Translate, “jewland.”)

IT ALL BOILS DOWN TO THIS: Jews in power hate our freedoms.

If we allow organized Jewry to pursue their path of wanton destruction of our civil liberties we will soon experience what 66 million martyred Orthodox Christians suffered under the Jewish-led Bolshevik Revolution.

And I’m not talking about a “nice life” with fries and ketchup in Lieberman’s soon-to-be-opened FEMA camps.