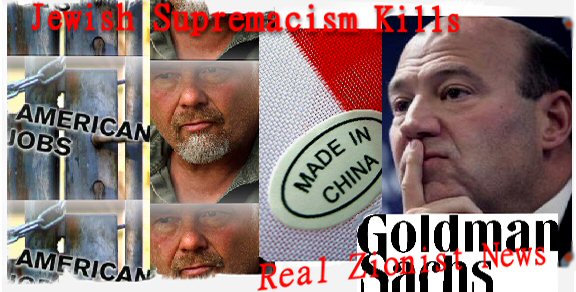 AN OLIGARCHY OF POWER centered on Wall Street is now plaguing America with both an economic crisis and the demise of the American worker.

A cabal of Zionist bankers, the Israel Lobby, and the Jewish-owned media are intertwined through finance capital, political dominance, and opinion-forming propaganda — in quest of a Judaic World Order headquartered in America.

As a result of off-shored jobs which serves the interests of Wall Street — and in turn, the interests of the Israel Lobby through Jewish investment profits and consequent funding — the Zionist-dominated press is preparing American workers to accept “less” as Jewish Supremacists receive “more.”

Through its columnists such as Thomas Friedman, the New York Times has been preparing the American worker to accept a lower standard of living or “get fired” while the monetary gulf widens between the white collar Jew and the blue collar Gentile:

“Welcome to the lean years. We just had 70 fat years in America. But now is the time to trim, to fire, and to downsize services, programs and personnel.” View Entire Story Here.

Another Jewish apologist for the downsizing of the American workforce is Michael Mandelbaum of the Council on Foreign Relations who sees a great “taking away” from blue collar Gentiles:

“We are entering a new era where the great task of government and of leadership is going to be about taking things away from people.” View Entire Story Here & Here.

THE ATTENTION to the export of jobs did not awaken until white collar jobs began to evaporate along with manufacturing jobs with no replacement jobs in sight. A US company can hire a software developer in India for $6.00 an hour and a data-entry clerk earns $2.00 an hour in India.

WITH FINANCE CAPITAL replacing production output as the economic power in America, Wall Street Jews are investing trillions of dollars into overseas manufacturing rather than bolstering a supply-side economy with its attendant job opportunities at home.

Jewish investment banks such as Citigroup, built under the direction of Robert Rubin, (a member of Obama’s economic team), announced on 1 September 2010, an increase to their China workforce to 12,000. Along with its 29 outlets in China, Citigroup has a labor force of 50,000 throughout Asia while America’s own workforce is in decline.

Since the North American Free Trade Agreement (NAFTA) was signed in 1993, outsourcing of jobs to Mexico has caused the displacement of millions of American jobs. Many of these lost jobs were high-wage positions in manufacturing industries.

The number of products that Mexico assembles and exports—such as refrigerators, TVs, automobiles, and computers—has mushroomed under the NAFTA agreement.

A little-noticed provision of NAFTA permits US banks to acquire Mexican ones. In 2001, Rubin negotiated Citigroup’s $13 billion acquisition of Mexico’s leading bank, Banamex.

The end result of implementation of NAFTA’s provisions is the establishment of a corporate combine of Jewish bankers actively ruling over the resources and people of the North American Continent.

Goldman Sachs, another leading Zionist Counting House on Wall Street, under the leadership of Lloyd Blankfein and co-religionist Gary Cohn, has a broad India Investment Portfolio along with branches in New Delhi and Mumbai.

Goldman has benefited substantially from decisions made at companies that have hurt working families — arrangements to close factories, paying poverty level wages, laying off workers, and cutting pensions.

Neither investments in overseas manufacturing by Jewish bankers nor “downsizing” of services affects American Jews whose income is accrued from the professions, academia, and corporate directorships.

BUT THE AMERICAN WORKER, dependent on domestic manufactures, sees himself in light of growing outsourcing, as a victim of Jewish Supremacists on Wall Street with their overseas investments and callous indifference to the American worker’s plight…