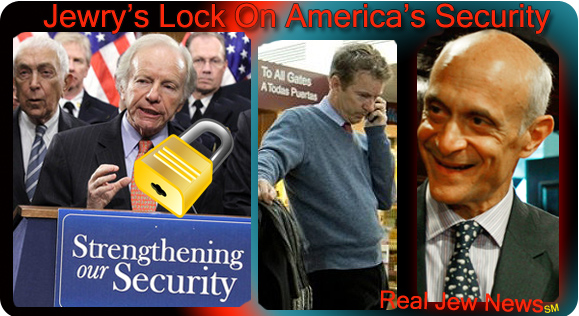 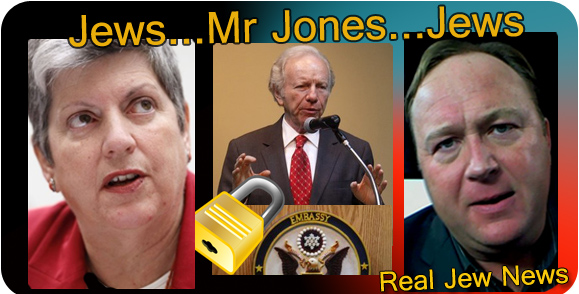 ALEX JONES OF INFOWARS would have us believe that Janet Napolitano (an alleged lesbian) is the power behind Homeland Security.


But nothing could be further from the truth.

The levers of control of America’s foremost security apparatus is in the hands of two Talmudic Jews, Senator Joseph Lieberman and his synagogue sidekick, Michael Chertoff, who happens to be a dual citizen of Israel and America with obvious dual loyalties. (Guess which “loyalty” he favors.)

Lieberman is head of the Senate Committee for Homeland Security which is the REAL Power behind the policing of America. 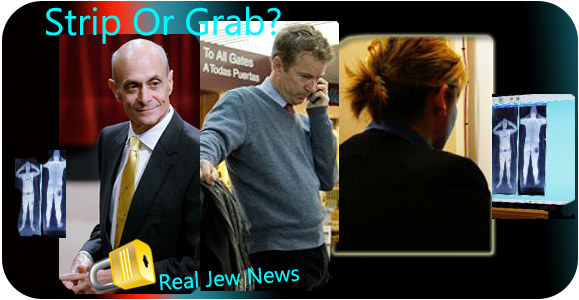 And Chertoff, former DHS head, who through abuse of the public trust with his subsequent Chertoff Group, was awarded an initial $173 million contract by the TSA (apparently via Lieberman’s help) for his RapiScan “X-ray” scanners that strip thousands of dumbed-down Americans down to the NAKED bone in airports across America.

In other words, two Jews are laughing all the way to the bank while the GOYS (including Rand Paul) are parading NAKED before the Jewish cabal. View Entire Story Here.

For some UNEXPLAINED reason, Rand Paul prefers some former female McDonald’s order taker viewing him stark naked over some disinterested TSA male functionary patting him down.

MOVING JUST A WEE BIT DOWN down the Talmudic food chain of America’s police state we find the Policy Director of Homeland Security, the Jew, David Heyman.

Like every Jew in high places in our nation’s thuggery against US citizens, Heyman is touted as an “expert” on “terrorism.”

How do these Jews gain these credentials? By studying the tactics of the Israeli Mossad and the Israel Defense Forces in their ongoing “terrorism” perpetrated on innocent Palestinians?

And not to be left out of the tribal monopoly on our nation’s “security” is the Jewish Lobby Group, the Southern Poverty Law Center, headed by Morris Dees, known as the “profiteer of hate.”

In the spring of 2010, SPLC CEO, Richard Cohen, was named to the DHS domestic watchdog, “Working Group on Countering Violent Extremism.”

Cohen recommended to the Group that “hate crime” training should INCLUDE a thorough investigation of “right wing extremism,” which apparently would single out all expressions of “anti-Semitism” as provocations of criminal activity.

And one of Cohen’s and the DHS Group’s first actions was targeting a GENTILE member of the Pro-Constitution organization, The Oath Keepers, by preventing him from enjoying custody of his newborn baby. 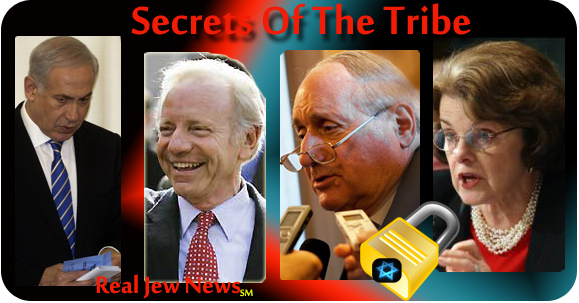 EVERYWHERE YOU GO — YOU STEP IN THEM

Levin was the SOLE SPONSOR of the National Defense Authorization Act whose Section 1031 authorizes the US military to arrest — without charges, without legal recourse, without notifying family or kin — any American CITIZEN simply “suspected” of “terrorist” involvement.

Jewish Senator Dianne Feinstein, head of the Senate Intelligence Committee, at first feigned opposition (knowing her amendment would NEVER pass) to the “indefinite detention” of US citizens. But, for all of her posturings, she did indeed SIGN the treasonous Act. 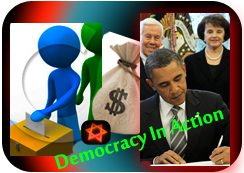 And with Feinstein’s oversight of all America’s intelligence gathering, a renewed “false flag” (the last one was some desperate crack-pot allegation) of the Iranian “threat” is now making headlines.

Director of National Intelligence, James Clapper, apparently under Feinstein’s oversight, announced on January 31 2012, that Iran is “prepared” to launch an “attack” on US soil.

ONE IS FORCED to ask the question: “Why are America’s most sensitive secrets in the hands of Jews?”

The answer, plain and simple, is that “democracy” is awarded to the highest bidder. And Jews got all the money…