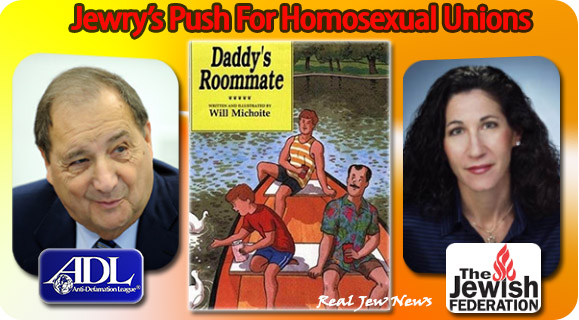 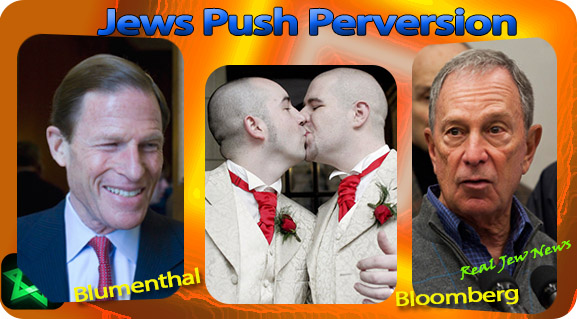 
Not only are Jewish Lobbies like the Anti-Defamation League and the Jewish Federation pushing sexual perversion but all of the MSM venues OWNED BY JEWS are behind the cultural denigration of America. View Entire Story Here & Here.

And yes, the very same Jewish ’suspects’ who want to strip the Goyim of their guns, Bloomberg, Feinstein, Blumenthal, et al, are at the forefront of promoting sexual perversity. NOT for the Jews (God forbid!) but to destroy the moral fabric of the Goys.

Bloomberg even puts up Videos featuring a slew of Christ-hating Jews pushing for homosexual and lesbian unions.

But let’s back up to one year ago when Jewry’s puppet Obama ‘came out’ for homosexual marriages. 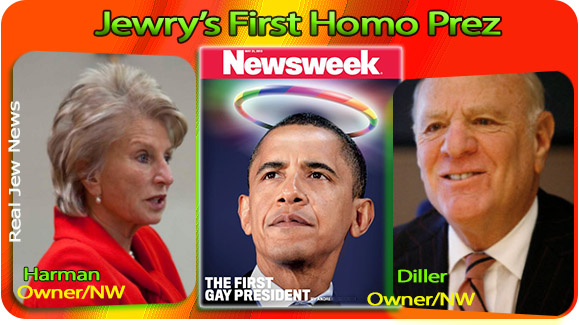 ON MAY 9, 2012, Obama (an alleged homosexual himself) announced to Jewish-owned ABC News that he endorsed same-sex marriage, after which he felt as if a “huge weight” had been lifted off him.

Then on May 21, 2012, Obama appeared on the front cover of Jewish-owned Newsweek Magazine with the Headline, “The First Gay President,” as if this was something a US president should be proud of.

What was Obama’s motivation besides his sympathy for shared sexual mores? He was seeking Jew-money to fund his re-election campaign, that’s what.

For, no sooner did Obama make his announcement favoring same-sex marriage on May 9, 2012, than Obama found himself handed $15 million in campaign contributions at a Jew-filled extravaganza held at a Laurel Canyon mansion in California the very next day.

And just last week, ABC’s featured JEWISH journalist, Rick Klein, boasted that Obama’s ‘coming out’…”changed everything“…propagandizing that even the Boy Scouts are prepared to lift its ban on homosexual participants. 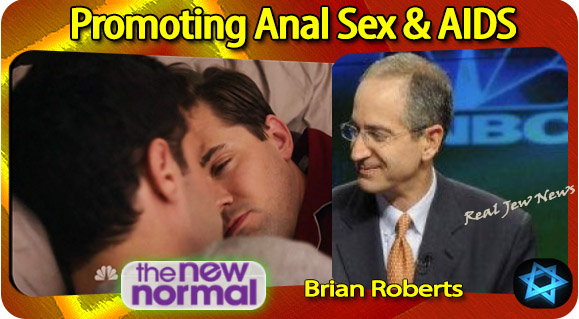 THE JEW BRIAN ROBERTS, owner of NBC, launched the network’s first homosexual sitcom, “The New Normal,” last September, targeting adolescent males at their most hormonally-confused period of their lives.

The New Normal has as its creator and producer (no surprise) the Jew, Ali Adler, a professed lesbian wielding much influence in the Jewish-dominated Main Stream Media.

This Jewish destruction of the traditional family ’sitcom’ focuses on two sodomite males as the only functional couple in the middle of a dysfunctional world where a ‘WASP’ surrogate mother made to look like a moron happily gives up her baby to ‘gays’ for pay.

The series also attacks other conservative institutions such as the Boy Scouts and the Christian priesthood. 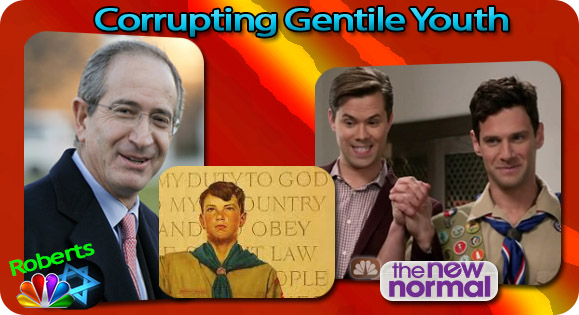 IN THE EPISODE, “About A Boy Scout,” the homosexual partner David, a former Eagle Scout, gets involved with the Boy Scouts and holds a “den meeting” with his married partner Brandon.

At the meeting the two sodomites promote homosexuality to the young scouts who are no older than 10 years old.

Then in the episode, “The Big Day,” centered on David and Bryan’s wedding, an actor portraying a Catholic priest blasphemes Holy Communion by calling it “sacramental swill.”

NO Christian group complained. Jews are allowed to blaspheme with impunity.

BOTTOM LINE. If it’s destructive, if it corrupts the youth, if it’s deranged and depraved, then you can count on Jews being the perpetrators.

Can we not affirm that the saying, “The Jews Are Our Misfortune,” is no less true today than it was a hundred years ago?

And: The Jews Behind Newsweek’s Gay Obama Cover Click Here