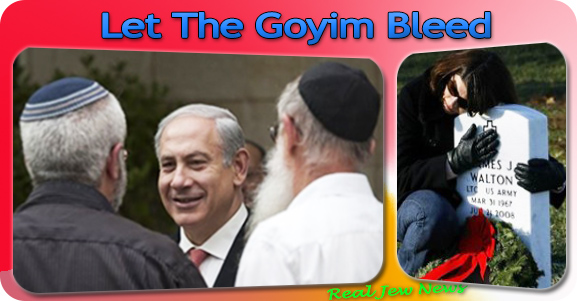 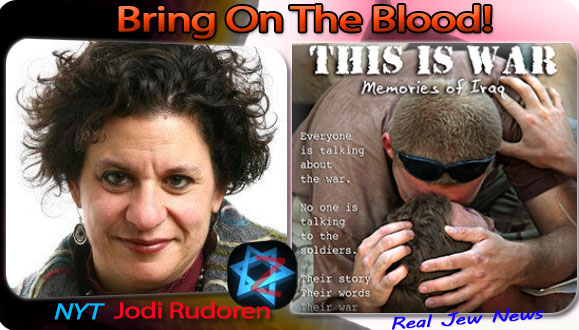 THE VERY SAME JEWS who brought us the lie of Saddam’s weapons of mass destruction are at it again trying to stir up a US war against Syria.


In its recent “Israel Has Proof That Syria Used Chemical Weapons” written by Jews David Sanger and Jodi Rudoren, the NY Times is pushing once again to send countless Gentile American soldiers to their deaths and back home in body bags.

(Jews don’t send their own to die in their wars. ‘Let the Goyim bleed for us!’)

The Jew-owned Washington Post didn’t waste a moment of time to chime in with “Honoring A ‘Red Line’ in Syria Over Chemical Weapons.” 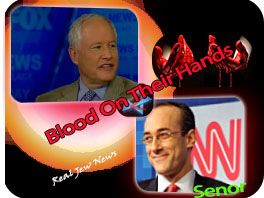 The Post (and all the neocon Jews at Foreign Policy Initiative) contends that since Israel (and its puppet states Britain and France) “concludes” that Assad has “very likely” used chemical weapons, then this crosses the “red line” drawn by Obama warranting a US military intervention.

Can anyone tell me how a “very likely” scenario concludes that Assad is definitely using chemical weapons?

This is Jewish DOUBLE-SPEAK right in your face.

Lavrov is calling for an “on-site investigation” which he claims Assad will comply with.

The Russian minister described the delays in sending a UN mission to investigate the reports as an attempt to “politicize the issue” and force the “Iraqi scenario” on Syria.

But all that matters to Jews is what’s good for their genocidal state of Israel. And to hell with the money and lost Gentile lives it will cost our Jew-ruined country. 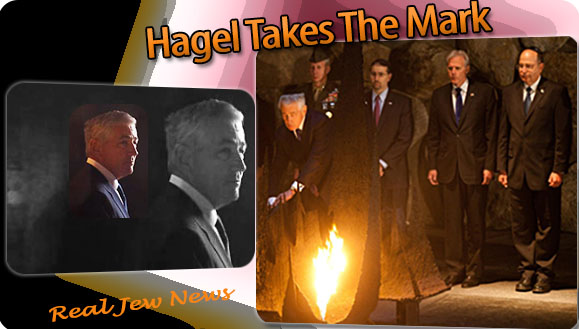 ADDED TO THE LIST of profound disappointments is Secretary of Defense Chuck Hagel…once hailed as an opponent of the Jewish Lobby.

Hagel has since sold his soul to the Jews. He’s just another sucker for the Jews, poor sap.

For with Hagel groveling in Israel last week stuttering out, “Iran is a threat, a real threat,” followed by, “with some degree of varying confidence, US intelligence concludes that Syria has used sarin gas as a weapon,” the new Pentagon chief can be added to the list of Jewish arse-kissers.

Can anyone tell me how “some degree” of “varying confidence” indicates that Syria has definitely been using chemical weapons? Surely we’re all being played as morons by the Jewish headline-crafters and their shills on Capitol Hill. 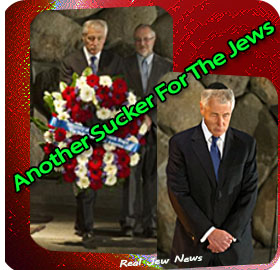 Hagel committed to “selling” (Read: “subsidized” by US taxpayers) KC-135 refueling planes that would prove vital to any Israel strike against Iran’s nuclear facilities.

“This is a game changer,” boasts the Times of Israel. “Up until now Israel could not launch an attack against Iran on its own. That’s no longer the case once the tankers arrive.”

And with Jewry’s new errand boy Chuck Hagel who also proclaimed that “Israel has a right to attack Iran,” the Jews now have a free pass to create another hell on earth.

Just yesterday, the Iranian Defense Minister announced that striking Iran will be Israel’s “last mistake,” echoed by Iran’s envoy to France that an attack will “lead” to WW3.

And both China and Russia have also warned that they will protect their interests (Russia will never relinquish their naval port in Syria’s Tartus) in the Middle East.

Surely, a brand new global war will be good for the Jews but VERY BAD for everyone else.

And: Political Judaism As A World Threat Click Here