The Futility Of American Elections 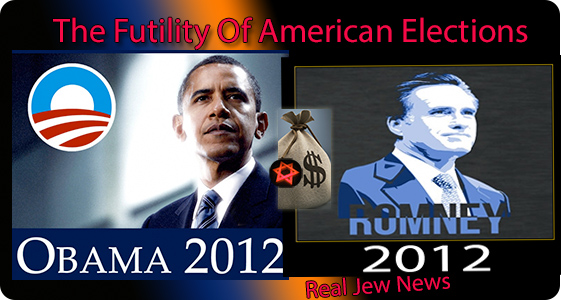 The Futility Of American Elections
By Brother Nathanael Kapner, Copyright 2012 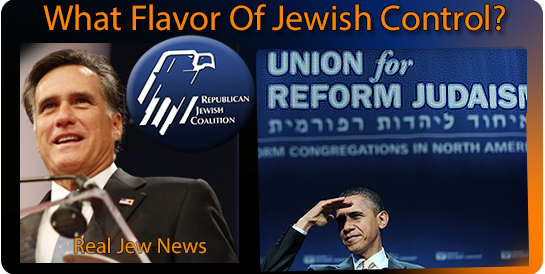 THE CHARADE IS UPON US once again. Roll down your sleeves for yet another B movie presented by the Jewish-owned Main Stream Media.


This dog and pony show known as “Elections 2012″ will feature the dog, Barack Hussein Obama, and the horse’s arse, Mitt Romney, as the contenders for the executive office.

Both candidates, (unbeknownst to most Americans), are in the pockets of American Jewry, which controls the political process of our hapless nation.

What flavor of Jewish control do you want?

Do you want a “Republican” flavor of Jewish manipulation? Then you’ve got the Republican Jewish Coalition with lots of Jewish money and plenty of candidates–like Mittens Romney–on the receiving end.

Or do you prefer a Democrat flavor of Jewish control?

Then you’ve got the National Jewish Democratic Council which has garnered millions of Jewish dollars for the Obama campaign.

And why is it that we have a man who looks like a Brooks Brothers shirt salesman, Mitt Romney—with the ability of a mouse to inspire enthusiasm—as our “choice” for the Republican candidacy and NOT Ron Paul?

Because the “choice” that we’re given is engineered by the Jewish-owned Main Stream Media that fears and ignores Ron Paul due to his anti-Israel, anti-war, and anti-police state stand. And that stand is NOT “good for the Jews.”

DOLLARS & PROPAGANDA can tilt any election depending on the will of who holds the dollars and who pulls the levers of propaganda.

Dollars—BILLIONS OF THEM—are in the hands of American Jewry and the levers of propaganda are pulled by the owners of America’s Main Stream Media: JEWS.

Corporations and “Presstitutes”…terms used by those who fear the ‘Jew word” like Alex Jones…do NOT own the media…JEWS own the media:

NBC - Owned by Brian Roberts, a Jew, who also owns Comcast. The CEO of NBC is Jeff Zucker, a Jew.

ABC - Owned by Jew-controlled Disney. The CEO of NBC is Robert Iger, a Jew.

CNN/Time Magazine - Owned by Time Warner. The principal shareholders include Carl Icahn, a Jew, and George Soros, a Jew.

Fox News/Wall Street Journal - Owned by Rupert Murdoch whose mother is Elisabeth Greene, a Jew. (Jews trace their racial identity from their mother.)

Newsweek - Owned by Jane Harman and Barry Diller, both Jews. 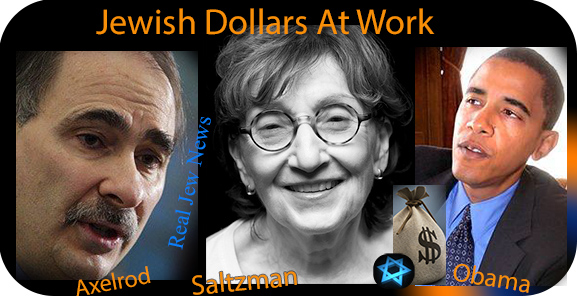 AN EXAMPLE OF HOW JEWISH DOLLARS and media work together to manipulate elections is to be found in the case of Barack Obama’s election to the Illinois Senate seat.

Bettylu Saltzman, a Jewish leftist activist and the money behind Obama’s rise to power in Chicago politics, in 1991 hired the Jew, David Axelrod of the political consultancy group, Axelrod Media Consultants/AKPD, to begin an evolving media-program so as to realize her dream of installing the first black president. 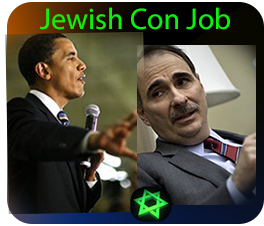 By employing an underhanded scheme of SMEARING the contending Democrat candidate, Blair Hull, Saltzman and Axelrod found a means of bringing the unknown and unqualified Obama into the halls of Capitol Hill in the 2004 Illinois Senate race.

Through their Jewish connections in high legal places, Saltzman and Axelrod brought Hull’s SEALED divorce proceedings to light and then LEAKED their damaging contents to the public, thus forcing Hull to withdraw his candidacy.

THE VERY SAME THING happened to the Republican contender, Jack Ryan, when Axelrod leaked to the Chicago Tribune an alleged “sex club involvement,” forcing Ryan to drop out of the race. This left Alan Keyes as the Republican candidate, an obvious loser against the Jewish media-hyped Obama. View Entire Story Here & Here.

THE FUTILITY OF AMERICAN ELECTIONS is now at its apogee. Many are fleeing America for greener pastures abroad. And those who are sticking around have lost all hope for any reform of the Federal government.

Serving and fulfilling a meaningful role in the life of one’s community is the last hope for the American citizen who desires a government free from the corrupting claws of American Jewry.