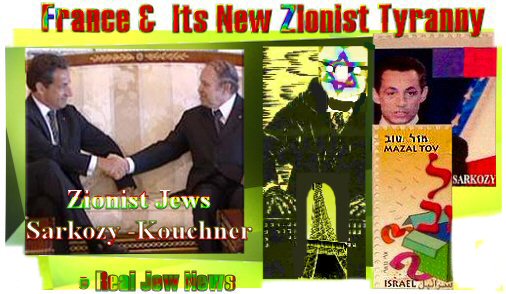 Sources: How Political Correctness Is Destroying The West Here; Rense.com Here
ONLY ZIONIST JEWS IN FRANCE WILL BENEFIT from the French state’s recent decision to block “hate Websites.”

A case in point is the June 25 2008 French blocking of the popular Anti Zionist Web Site “Judicial-inc.biz” Here.

In another recent affirmation of Zionist tyranny in France, an Algerian Minister blasted Sarkozy for being a puppet of France’s powerful Jewish Lobby when saying:

— “Did you know that Israel released a postage stamp with Sarkozy’s image during the French electoral campaign?” (See stamp Here & Here (Scroll Down)

“And why did Bernard Kouchner (a Jew) decide to join the government as Foreign Minister? It was the result of the advice of the real architects of Sarkozy’s rise to power, the Jewish Lobby, which has the monopoly over industry in France.” — Here 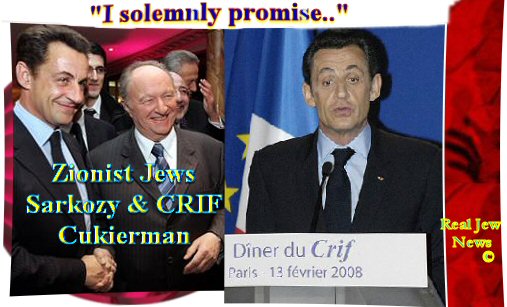 HOW THE FRENCH JEWISH LOBBY WORKS

THE “COUNCIL OF JEWISH ORGANIZATIONS” IN FRANCE known as the CRIF hosts as its favorite guest none other than French President Nicolas Sarkozy.

The CRIF, the umbrella group for hundreds of Jewish lobbies in France, invited Sarkozy to its annual dinner as the featured guest speaker on February 13 2008 Here.

In his speech Sarkozy made a solemn promise to the Jewish Lobby:

— “I solemnly promise never to shake hands with anyone who doesn’t recognize the State of Israel.” — Here & Here

The French newsmagazine, Marianne, criticized the invitation, arguing that it shows that “Sarkozy is encouraging religious communities to lobby for their own interests in a strongly secular state.”

ON MAY 31 2008 A JEWISH LOBBY called “Liberté pour l’Histoire” held a conference at the Sorbonne in Paris.

This Jewish Lobby Group is the main proponent of the pro Zionist law called “Loi Gayssot” which criminalizes those who question the Jewish Holocaust.

“Loi Gayssot” was both sponsored by and named for a Jewish Communist deputy in the National Assembly, Jean-Claude Gayssot. The law criminalizes free speech that might offend self-designated victim minorities - while making sure that denials of Jewish Bolshevik mass murders would be exempted from prosecution.

A recent victim of this law is the French chemical engineer & father of seven children, Vincent Reynouard. The European Jewish Press boasts of Reynouard being sentenced to one year in prison on November 2007 for writing a 16-page pamphlet entitled “Holocaust? The Hidden Facts.”

According to the May 31 2008 speech of the President of “Liberte pour l’Histoire,” a Zionist Jew by the name of Pierre Nora, Reynouard’s imprisonment was justified by Nora when saying, “in France Loi Gayssot has never been used to punish historians but only so-called historians.”

But is the Sorbonne educated & University of Lyons Professor Dr Robert Faurisson a “so-called historian?” Yet Dr Faurisson is currently being prosecuted by the government of France for having spoken at the Tehran Holocaust Revisionist Conference.

Bringing the criminalizing of free speech into the Le Theatre de l’Absurde is the prosecution of the French lawyer Sylvia Stolz.

Attorney Stolz was sentenced on January 14 2008 to 3 and-a-half years in prison and disbarred for 5 years for offering too vigorous a defense (!) of Holocaust revisionist Ernst Zundel during his trial in Germany Here & Here.

I Recommend That Zionist Jews Be Censured
For Denying French Citizens Their Right To Free Speech!

And: “Vote No To A Zionist EU!” Click Here