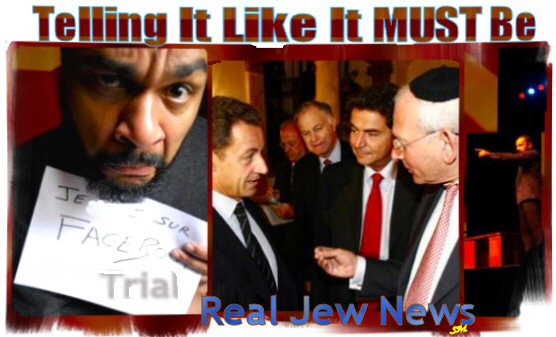 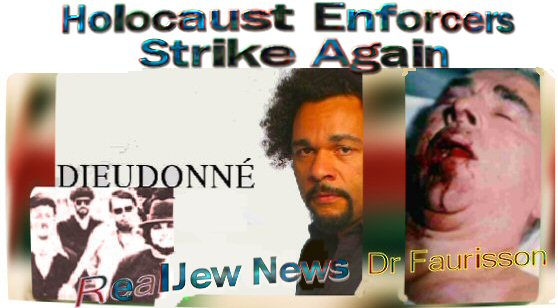 Dr Robert Faurisson Of France Beaten By Jewish Holocaust-Enforcers
THE VICIOUS ‘BIG-BROTHER’ ARM OF INTERNATIONAL JEWRY is out for blood once again. Their latest prey, against whom International Jewry has armed the French government, is the popular French comedian known as “Dieudonne.”

The black comic, whose full name is Dieudonne Mbala Mbala, will go on trial on May 5, 2009, on charges of ‘Anti-Semitism’ because he awarded a prize to a ‘Holocaust denier’ during a comedy show on December 29, 2008, at The Zenith, one of Paris’ biggest concert halls.

Dieudonne brought forth International Jewry’s blood-thirsty fangs after he had an actor dressed as a Jewish deportee present a prize for “unrespectability and insolence” to Dr Robert Faurisson, a scholar who has proven the non-existence of gas chambers in German WW II concentration camps. 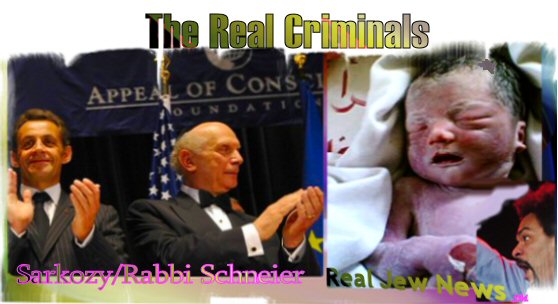 INTERNATIONAL JEWRY CALLS DR FAURISSON a ‘holocaust denier,’ a Zionist-enforced ‘crime,’ played up by the Jewish-occupied press as a verbal articulation more heinous than Israel’s genocide of tens of thousands of innocent Palestinians.

Dieudonne, 42, who will be brought before the Paris criminal court on May 5, 2009, faces a sentence of six months in prison and a maximum fine of 22,500 euros (29,800 dollars) if convicted. Dieudonne is to answer charges of “causing offense to a group of persons based on their origin, ethnic background, race or religion,” according to the Charter On Xenophobia of the Jewish-controlled EU parliament. 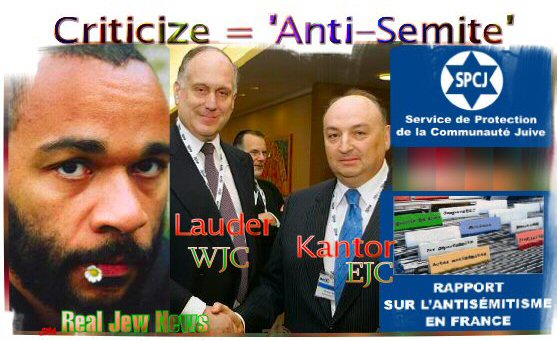 SEVERAL CITY COUNCILS, under pressure from French Jewish groups such as the Service de Protection de la Communaute Juive & The Committee Representing Jewish Institutions In France, as well as the World Jewish Congress & the European Jewish Congress, (they hate our freedoms), had forced theatres throughout France to cancel shows by the comedian since its opening in December of 2008.

THE BLACK COMEDIAN, Dieudonne, through the lobbying of French Jewry and the inciting of the Jewish-occupied French press, has over the past years been ordered to pay several fines for ‘inciting hatred’ due to various statements he made against the evils of Zionism.

In September 2007, Dieudonne was fined 7,000 euros after he accused Jews of “memorial pornography” for their remembrance of the Holocaust during a press conference in Algeria in 2005.

AT THE SAME CONFERENCE, Dieudonne added these words of truth: “Jews occupy all the strategic offices in the national government and thus control the national agenda. Because of this, they have a kind of impunity to characterize all criticism as anti-Semitic. The machinations of Jewish power are to keep the French government pro-Israel where the majority of the population is pro-Palestinian. And those Jews who criticize me are all former slave merchants who now control the media and the banks.”

In March of 2009, the comedian Dieudonne, born to a Cameroonian father, again brought out the blood-thirsty fangs of Jewry, after he announced plans to run as an “Anti-Zionist” candidate to the European parliament in the June 2009 elections. View Entire Story In The Jewish Press Here, Here, & Here. 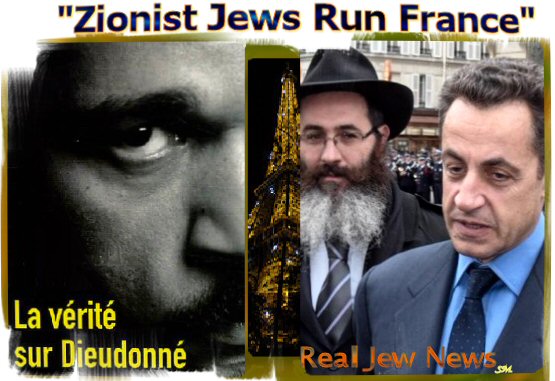 YET ANOTHER OF THE THOUSANDS OF JEWISH ORGANIZATIONS funded by international Jewish wealth, has targeted the black comedian, Dieudonne, simply because he denounces the Zionist-Jewish control of France.

The Stephen Roth Institute for the Study of Contemporary Antisemitism and Racism, headquartered in Tel Aviv with a staff of 30 “Jewish watchdogs,” recently issued a report entitled, “Anti-Jewish Prejudice Amongst The Black European Community.” In the report, Dieudonne Mbala Mbala, was especially singled out as a target for their propaganda hype and Zionist-Jewish venom:

“Dieudonne promotes the theory that the trade of African slaves was a Jewish enterprise and that France is ruled by Jews and neo-Zionists.

Dieudonne stood for the French presidency but did not gather the necessary support from elected officials, a condition for candidacy, and he withdrew from the race. However, he succeeded in building a coalition of supporters ranging from the anti-Zionist radical left to the extreme right.

Dieudonne visited Lebanon and Syria in September 2006, where he met with Hezbollah and Ba’ath party officials. In November of 2007, Dieudonne attended the presidential convention in Paris of FN, an extreme right political group, where he met with Le Pen, a neo-nazi fascist, for whom he expressed support. 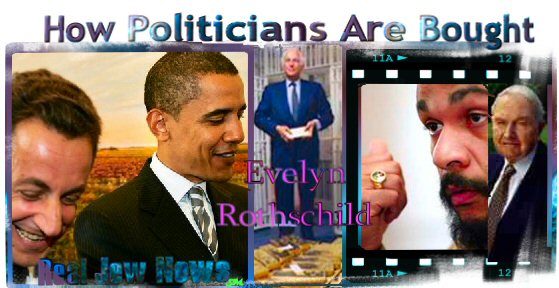 THE FRENCH JEWISH COMMUNITY, the largest in Europe, numbers only 575,000 out of a total population of 58.5 million. Why then does the French Jewish community wield so much power that they can bring a popular black comedian to trial simply because of an Anti-Zionist/Anti-Holocaust-Hype comedy routine?

Perhaps the answer can be found when investigating every country in which the Jews have been given freedom by their host nations. Jews have the money, lots of it. And with lots of Jewish money, politicians are bought and the freedom to speak out against the evil-doings of Zionist Jews is muzzled by Jewish-watchdogs & Holocaust-enforcers…

And: Jews Now Out For Williamson’s Blood For ‘Holocaust Denial’ Click Here