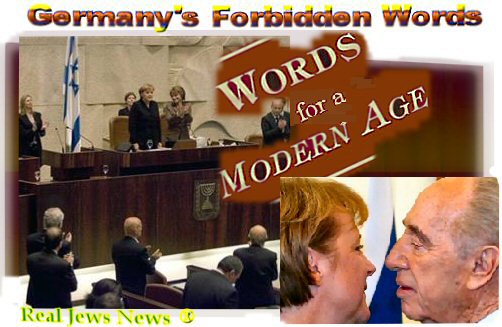 (Michael James is a renowned journalist and resident in Germany. He is the author of numerous, copyright-free controversial articles, the latest of which is:
“Game Over: Top German State Attorney Backs Mike James, Jews Silent” Here).

In 1994, the parliament of the defunct “Bundesrepublik Deutschland” (BRD) - the post re-unification Federal Republic of Germany - treasonously mandated imposed Zionist legislation making it a criminal offense to deny or even play down the so-called “Jewish Holocaust.”

Anyone in Germany who publicly denies the propagandistic narrative upon which the terrorist state of Israel was established or questions any one of the many anomalies extant in the doctrine of official “history,” faces a maximum penalty of five years in jail.

Indeed, two German scholars, Ernst Zundel and Germar Rudolf were illegally abducted from the United States and imprisoned for presenting scientific evidence that a phenomenal hoax called the “Jewish Holocaust” had taken place.

Zundel’s lawyer, Sylvia Stolz, was herself imprisoned for three years in January of 2008 simply for presenting supportive evidence on behalf of her client. British historian David Irving was snatched by police on a private trip to Austria and imprisoned for once having presented verifiable proof that the gas chambers in Auschwitz were constructed as propagandistic museum pieces in late 1948.

Yet hardly anyone mentions the “German Holocaust” which entailed the systematic murder, starvation, and death by typhus of almost 3,500,000 displaced and impoverished German citizens, whose corpses were stacked in the former labor camps of Auschwitz, Belsen and Treblinka - and photographed by the Zionist media as “evidence” of “mass-murdered Jews.”

IN A SPEECH given to the Israeli Knesset on March 19, 2008, Germany’s Chancellor, Angela Merkel, reiterated the decades-old reparations doctrine by saying: “Germans are filled with shame over the Jewish holocaust.”

The German media is now reporting that many Germans, particularly young people who no longer believe their teachers, are suffering from “holocaust fatigue” and no longer trust Berlin’s Zionist puppets, such as Angela Merkel, to tell them the truth. Yet even those who are brave enough to commit “heresy” and risk the wrath of the Jewish Inquisition are forced to whisper their dissent using coded language lest thy find themselves in a German Soviet Gulag, such as Mannheim.

Germany under its Zionist controlled leaders has now reached the point in which certain words used in German society will make one highly suspect. In Europe’s dissenting underground community these words are known as “Germany’s forbidden words.”

PUTTING A MUZZLE ON THE MOUTHS OF GERMANS

HIGHLY CHARGED WORDS which are monitored by the Zionist thought police express the true inner thoughts of most Germans. There are 5 words that could get a German in trouble:

1) “Leitkultur” - This word denotes the “predominant culture” of German and European social mores which most Germans wish to retain as part of their Germanic culture.

An example of the fallout which occurred after using the forbidden word “Leitkultur” was evidenced when Friedrich Merz, a former leading member of the Christian Democratic Union, used the term “Leitkultur von Deutschland” to describe what immigrants coming to Germany should aspire to.

Merz inspired, (as did Jurgen Molleman of the Free Democrats who is believed to have been “suicided” by Mossad in June 2003), an awakening German patriotism by striking a chord in a country where acceptance of “Alleinschuld,” (German guilt for WWII), continually propagated by Germany’s Jews and Zionist-leadership, is on the wane.

Merz’s use of the word “Leitkultur” sparked an intense national debate among ordinary people who long for a return to traditional German Christian values.

Leaders of the Zionist Jewish community attacked Merz with a vengeance. The German Jewish community leader, Paul Spiegel, the former President of the ADL-style Zentralrat der Juden in Deutschland, facetiously asked 200,000 people gathered at the disingenuously named We Stand Up for Humanity and Tolerance demonstration held in Berlin on November 9, 2000:

— “What’s all this talk of Leitkultur? Does German Leitkultur include hunting down foreigners and burning synagogues? Are we talking about a culture or about the prevailing values of democracy as stated in our national constitution?

Merz quickly became anathema in the eyes of the Jewish-controlled media and has since effectively retired from active participation in politics.

2) “Verdorbenes Kultur”/”Entartete Kultur” - These phrases denote a rotten or decadent culture, which the German people of the 1920s and 1930s perceived as emanating from prominent Jews in the media, arts, film, theatre, and the sex and drugs trade.

The phrase “Verdorbene Kultur” was cited in July 2007 by Horst Mahler, a leading German revisionist historian, when saying that Hitler’s book “Mein Kampf” should no longer be banned in Germany since it provided well-founded definitions of what constituted a Zionist-enslaved culture in moral decline. In so doing, Mahler was subject to months of abuse by the Jewish-controlled media, Germany’s Central Council of Jews, and the political elites.

In his still very popular book, Hitler wrote that one of the main evils responsible for the suffering, hunger and poverty of the German people was the German-Jewish role in creating a “rotten culture” of decadent art designed to destroy the true moral fiber of a once-proud civilization:

— “Culturally, the Jew contaminates art, literature, and the theater by overthrowing all concepts of beauty and sublimity, of the noble and the good, and instead drags men down into the sphere of his own base nature” — Here

The idea of lifting the ban on “Mein Kampf” was swiftly criticised by Jewish groups. Wolfgang Benz, the head of the Centre For Anti-Semitism Research in Berlin, described it as “absurd.” Salomon Korn, of the Central Council of Jews in Germany, said it would be an insult to Holocaust survivors.

Horst Mahler, who is no stranger to the Federal Republic of Germany’s brutal Gulag system, has just been sentenced to 11 months imprisonment for treating the Jew Michel Friedman with “disrespect.” Friedman, a notoriously arrogant talk show host and a former deputy General Secretary of the ZJD with a criminal record as a cocaine dealer and a suspected key player in the illicit sex trafficking trade, filed suit following an interview with Mahler in the November 2007 German edition of “Vanity Fair.”

In September 2007, the Catholic Archbishop of Cologne, Cardinal Meisner, ignited a firestorm of controversy when he told his congregation “a culture without God is a decadent culture.”

The Zentralrat der Juden in Deutschland went ballistic, denouncing the cardinal for using a word frequently cited by the National Socialists in their condemnation of decadent Jewish art, organized prostitution rings, sex trafficking and the drugs trade.

3) “Volksgemeinschaft” - This phrase denotes a society based upon the principles of a “Leitkultur” that prioritizes the needs of its own citizens. The Jewish State of Occupied Palestine (Israel) itself is indeed a “Volkgemeinschaft.”

However, in Germany, anyone who writes or speaks about the advantages of a
“Volksgemeinschaft” for the German people is subject to prosecution under Section 130 and other laws that prohibit speaking favorably of National Socialism, which itself was based upon the promotion of a Volksgemeinschaft. In Israel, such people who hold to this creed are described as the “Chosen People.” In Germany, they are branded as “Nazis” and face imprisonment of up to five years.

4) “Jude” (Jew) - It is considered by the authorities as “anti-Semitic” to call a Jew a “Jew.” One must always refer to a Jew as a “Jewish person.” The irony is that 95 percent of all Semites living in the world today are Arabs. The other five percent are Sephardic Jews, who are themselves genetically identical to Palestinians.

5) “Vaterland” (Fatherland) - The police are obliged to question any German who refers to his home country as the “Fatherland.” The word is associated with National Socialism and those inclined to use it are branded as “Nazis.”

In Germany there exists a list of hundreds of forbidden words and phrases. We, Brother Nathanael and Michael James, have mentioned only five. Remove the muzzle — go to jail.