Vote No To A Zionist EU! 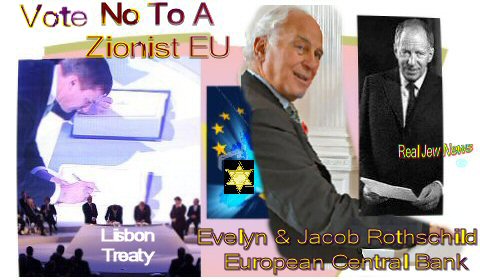 Sources: “The End Of The Nation States Of Europe,” Rense News Here;
“8 Reasons to Vote No to Lisbon,” Free Europe Site Here
ON JUNE 12, 2008 Ireland will be the only members of the EU given the opportunity to vote on the EU’s Lisbon Treaty - potentially the most fundamental piece of legislation in Europe’s history.

If the Irish people vote “Yes” to the Lisbon Treaty they will be giving the EU the Constitutional form of a Federal EU State in which Ireland would be denigrated to a provincial region.

The first sentence of the Lisbon Treaty says that “The State may be a member of the European Union established *by virtue of said Lisbon Treaty.*

The second sentence of the Lisbon Treaty says that “No provision of the Irish Constitution prevents laws enacted by the European Union.”

This shows that the EU Lawmaking apparatus of a post-Lisbon Union would have supremacy over the Irish Constitution. 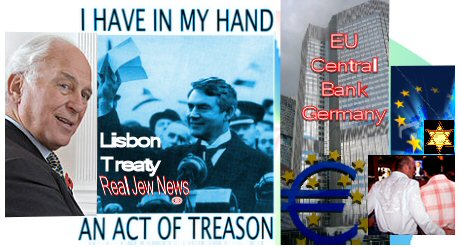 THE EU IS A ZIONIST SUPERSTATE

THE UNDERPINNING OF THE EU is “economic.” Germany’s EU voting rights under the Lisbon Treaty will increase from 8% to 17%.

This will give Germany even greater dominance of the EU. And any 7th Grade student of Economics 101 knows that the Rothschilds (Jews) run the European Central Bank located in Frankfurt Germany where the Rothschilds launched their world wide Zionist control of the world.

Thus if the people of Ireland, historically a Christian people, vote “Yes” to the Lisbon Treaty, they will be voting “Yes” to a Zionist takeover of their historic Christian nation.

This is because the Lisbon Treaty would make the EU Court of Justice in Luxembourg the final decider of human rights rather than the national courts of the member states.

This raises the likelihood of clashes over rights standards in sensitive areas.

I RECOMMEND THAT ALL CHRISTIAN FOLK
VOTE NO TO A ZIONIST EU NOW!