Zionist Bosses Behind The EU 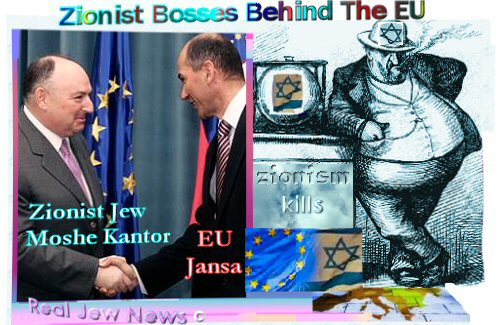 ZIONIST BOSSES BEHIND THE EU
By Brother Nathanael Kapner, Copyright 2008-2011

Based in Paris, the European Jewish Congress represents some 38 (!) Jewish national organizations across Europe.

The European Jewish Congress recently applauded the EU for “upgrading relations with Israel.” In its applause the EJC used that famous Zionist lie citing Israel as “the only democracy in the Middle East.” (Israel is NOT a democracy!) 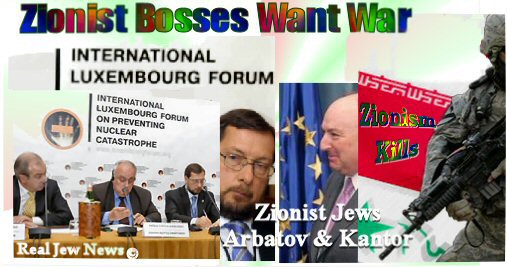 IN A STATEMENT MADE AHEAD of the July 1-4 2008 EU Talks - the EJC President Moshe Kantor said he will ask the EU to consider war against Iran:

Truth is, it is Israel that is the “center of world terror today” not Iran. And it is the Zionists who are “destabilizing world peace.”

At the EU’s June 12 2008 Luxembourg Forum on Preventing Nuclear Catastrophe the Zionist Jew Alexei Arbatov in typical Zionist style made a veiled threat of war against Iran by quoting Bush’s recent warning to Iran: “We are keeping all options on the table if diplomacy fails.”

The Zionist Bosses of the EJC said that the Forum “focused on the dangers of nuclear weapons falling into the hands of rogue states.”

But it is Israel that is the “rogue state” - not Iran! And as political analyst Terrell E Arnold points out: “Israel needs a nuclear monopoly in the region only because it proposes to continue the ethnic cleansing of Palestine. It needs a bigger club than anybody else to continue on this course unchallenged.” 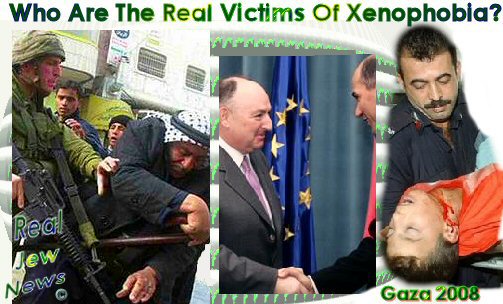 NO CRIMINAL COURT ON EARTH defines “xenophobia” as a crime. But EJC Moshe Kantor will be bringing to the EU table the Zionist definition of xenophobia: “Don’t Anyone Dare Criticize Us Jews!”

On January 2 2008 Moshe Kantor called for “Tolerance Laws” to be used against Christians:

— “We live in a Christian Europe. Europe has lived through the Inquisition which burned non-Christians. Thus Europe is in desperate need of Tolerance Laws to provide for the co-existence of Christians and Jews.” — Here

In April 20 2007 EU officials agreed to new rules for legislation to criminalize xenophobia in all of its member states. The EU officials called for jail terms for those who “incite hatred against a group defined by race, religion, or ethnic origin.”

And guess what “group” is meant? Jews! Yet the Palestinians are the real victims of xenophobia - namely Zionist xenophobia crimes against Palestinians!

We Must Stop The Zionist Domination In Europe!

And: “Vote No To A Zionist EU” Click Here