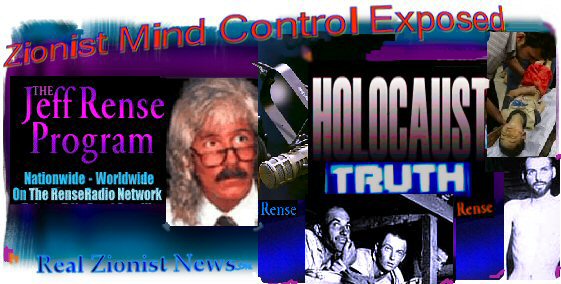 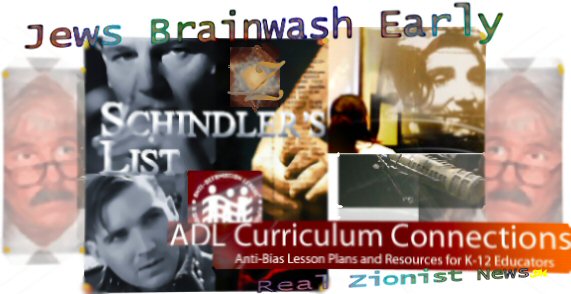 CONTROLLING THE PUBLIC MIND through the major and minor media is a prime component of Zionist Jewry’s (and their willing non-jew accomplices) quest for cultural dominance in America, a province once held by white Christian Americans.

Mass mind control is now an advanced and exact science having been perfected over the past century with the advent of radio and the following deluge of electronic media led by Jewish-dominated television and film, the most devastating mediums of propaganda and mental, cultural conditioning in history.

For the past several decades, the centerpiece of the Zionist’s control over general Western public opinion is their use of “Holocaust Remembrance” propaganda (see also Prof Norman Finkelstein’s The Holocaust Industry) to instill guilt for ‘Jewish victimization’ in the white Gentile masses, whose independent interests, open inquiry and unfettered voice, media-dominant American Jewry has successfully suppressed.

Extremist Jews have the means at their disposal through the press, screen, infiltration of public school curriculae, and sheer political muscle (AIPAC being the most obvious example) to engineer their particular narration of guilt-ridden history in order to form attitudes and actions that define for the non-Jew what a “righteous Gentile” is. View ADL’S Mind Control Of Gentile Children Here & Here.

The movie Schindler’s List, produced by the powerhouse Hollywood Jew, Steven Spielberg, is an example of Judeocentric determinism and socialization, if not downright re-education, of the non-Jew.

For the hero of Schindler’s List, German-born Oskar Schindler, is crowned a “righteous Gentile” who gets a free ticket to Jew Heaven for protecting Jews from the Nazis during WWII. In other words, “protect and defend Jews,” regardless of how immoral some of them may be, and one’s salvation is guaranteed.

That’s the ultimate message in ‘List,’ but make no mistake, for a non-Jew to feel instant ‘guilt’ even when the word ‘Jew’ is mentioned is the ultimate goal of Zionism and it’s Holocaust theme.

Recently, a Hollywood establishment member was asked if the Holocaust is not finally wearing a little thin as a film theme. He instantly retorted, paraphrasing, ‘No way! The Holocaust is the greatest story line in human history!”

THE NOW LEGENDARY RADIO HOST and journalist, Jeff Rense, of Rense.com, has something on the order of 40-50 guests a month on his Radio Show representing an unprecedented diverse panorama of news, information and opinion. If someone has thought it, it has probably been mentioned in the 16 years the program has been on the air.

As a favor to a fellow journalist, Rense recently extended an invitation to an ex-attorney, Leo Donofrio, who has been chasing the spectre of Obama’s true birth place on the Internet and in court.

However, just over ten minutes before Donofrio was to present his work on the Rense program, he emailed the host and canceled his guest visit on October 8, 2009, scheduled for 9 PM Pacific Time. Fortunately Mr. Rense happened to glance at his computer screen and saw the email. In any case, Donofrio stated in his email to the show host and on his Blog, that he was canceling his appearance due to his “Holocaust” sensitivities. Here is part of that posted announcement and email:

I Have Canceled My Appearance On The Jeff Rense Radio Program

“I just went to the Rense.com site to get the feed for the show. At the site, sprawled on the front page is a huge picture of Holocaust denial advocate Ernst Zundel. While I do believe in free speech for all, I cannot risk being associated with anyone who denies one of the most horrific moments in history. The Holocaust was real and we can never forget the atrocity.” View Entire Announcement Here.

This was a strange and unusual thing to do to any host, most especially because the program had nothing whatever to do with the Holocaust. Jeff Rense responded to Donofrio via email with the following remarks: 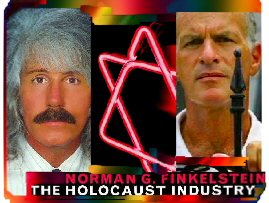 “This is a tough position for you to put me in. If you are that afraid, you could certainly voice a disclaimer. The site Rense.com is not the Radio Show, although it is advertised there. As for David Dees’ art, it is one of a thousand opinions I present every month which is utterly crucial if we are going to sustain the First Amendment.

The text you allude to does not cross any boundaries and urges something World Zionism will never allow: An honest, REAL investigation of what truly happened in WW2.

What you don’t know and most don’t, is that Zionists DIRECTLY CAUSED the Holocaust. Read the works of a man who was there: The heroic Rabbi Michael Dov Weissmandl. Here’s one to start with: Ten Questions To The Zionists. It’s short and I trust you’ll read it. Also, Prof Norman Finkelstein’s book, The Holocaust Industry, would be very instructive for you.

I do not agree with all the material on my site, but I DO agree with the authors’ rights to be heard—just as I do you and YOUR valiant work…which has been suppressed by the controllers and the Zionist owned media with great energy.

How do you think Obama was installed as president? You might start studying Zionism to find out. All good wishes…Jeff Rense.” By Permission Of Jeff Rense @ Rense.com Here.

THE LAST-MINUTE VANISHED RADIO GUEST was apparently frightened off by a single piece of political art which appeared on the Rense News Site that described the plight of Zionist political thought prisoner Ernst Zundel and his wife Ingrid. Zundel has had seven YEARS of his life stolen because he asks questions about the true dimensions of the Holocaust. The art, by the world respected and brilliant David Dees, in a brief text addendum, alluded to the need of a full and open investigation of WWII and the Holocaust which Mr. Zundel has advocated for decades.

For the record, there are over 300,000 news stories on the Rense News Site…stories about Mr. Donofrio’s own AMERICAN government’s crime, fraud, theft, murder, pedophilia, prostitution, drugs, wars, mass genocide, financial gangsterism, environmental slaughter and catastrophe, and all manner of US horror. Apparently to most, these are acceptable as subject matter, including Mr. Donofrio, (as it appears), who expresses no fear at all of the ‘risk of being associated with’ these PROVEN and documented inhuman crimes and treasons perpetrated by his own government. 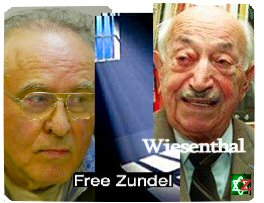 However, if a journalist on a net site presents even a few words challenging the politically-correct Zionist view of WWII, things change instantly, and any such questioning, however minute, must be avoided under the greatest of bone-shaking fear as possibly being perceived by Zionist special interest groups as somehow supporting views counter to their prevailing politically-correct mind control and history-shaping paradigms.

One may question and mock God, the Republic, the planet, but one dare not EVER question the Zionist version of WWII…a version so full of holes and contradictions it is literally screaming for an honest, forensic, academic investigation. History is written and created by the winners and the first casualty is always the truth. And no investigations are to be allowed.

Donofrio did not have the courtesy to reply to Mr. Rense’s return email (Rense had to scramble to fill the suddenly empty hour) and reportedly began censuring and erasing the comments Free Speech defenders tried to post on his Blog. At least one person tried to post a free speech comment on the Donofrio Blog only to have it erased each time. When Mr. Rense found out about this censorship, he felt compelled to send Donofrio a second email - asking him to please post his (Rense’s) remarks and feelings in the Comments Section of his, Donofrio’s Blog - to at least be fair and balanced: 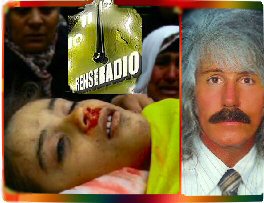 “May I remind you dear Leo, that Freedom of Speech and Freedom of the Press must be kept at all costs. I did not in any way, shape or form ‘put you’ in anything. My site contains stories of the American genocide of 4 million Iraqi men, women and children since between Bush 41 and Bush 43.

It also contains full coverage of the 2 million Afghanis whom America has annihilated and displaced in the past eight years. That’s a genuine, documented 2 million as verified by the Red Cross and the United Nations.

You seem to have no problem with the US government denying that Holocaust. You are just another mind-conditioned victim who thinks those who suffered and perished in WWII are more important than those your government has slaughtered.

And what about the Palestinians who have been liquidated in Gaza in the last six months and sixty years? You can’t have it both ways, my friend. God’s ‘chosen’ are no better than any other group on the planet.

I expect you will be honorable enough to add my reply, in full, to your site under your statement. Respectfully, Jeff Rense.” By Permission Of Jeff Rense @ Rense.com Here.

Donofrio ignored Jeff Rense’s correct, polite request for fairness and to have his reply posted, and apparently continued editing out negative replies to his Blog to show unanimity for his bailout of the Rense program…over the tiny text of just one of the mass of news stories that runs through Rense.com around the clock.

To this reporter, who grew up a 100% Jew, it is always sad to see anyone so conditioned, mind-controlled and fear-oriented as to be afraid to even *remotely* be connected with a version of history that has a growing mountain of questions about it and is crying out for a full investigation.

The Jews who died in the horror of World War II deserve nothing less. It is sad that some choose not to honor their memory by supporting (or at least staying neutral) the calls for a first, full and open scientific and forensic examination of the War and in particular what truly happened in the ‘Holocaust’ to Europe’s Jews, and of the clear and complicit role of World Jewish Zionism in their fate. The dead deserve nothing less. In the meantime, it is hoped that Mr. Donofrio is successful in his efforts in the Obama ‘birther’ controversy…and might choose a more enlightened path and wider world view in the future.

And thus, another American Gentile appears to have fallen
before the image of the Zionist beast and its dominance of history.
Why no investigation? What are they afraid might be found out?