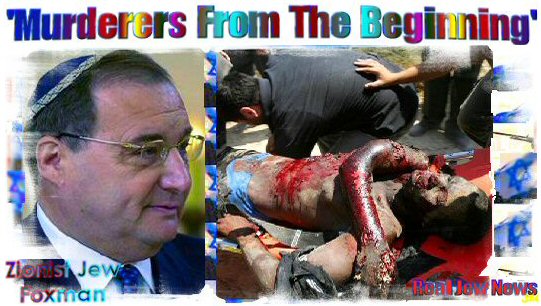 WHILE THE WORLD WATCHES IN HORROR the spectacle of the genocide of Palestinian civilians in Gaza, organized Jewry, (Jews have a satanic talent for organization), relentlessly promotes the Gazan massacre of children, women, and non-combatant males.

In defense of the Israeli slaughter in Gaza, the Anti Defamation League (ADL) is currently propagandizing the worn-out canard of “Israel’s right to exist.” Truth is, Israel has NO right to exist, given its foundational Zionist intent to engage in the ethnic cleansing of the indigenous Arab population of Palestine.

Judaism’s justification of the slaughter of civilians is rooted in “Jewish Law” as explicated in the Talmud. Expressing the views of the Talmud in his justification of the Israeli attacks on Arab civilians, Rabbi Basil Herring, Vice President of the Rabbinic Council Of America, (yet another of the thousands of satanic Jewish organizations), recently outlined Jewry’s protection of its own at the expense of Arab civilian lives:

“Our traditional sensibilities tell us that it is not right to risk the lives of our soldiers to minimize civilian deaths on the other side.” View Entire Story Here & Here.

And former Ashkenazi chief rabbi of Israel, Rabbi Avraham Shapira, who in Talmudic tradition looks upon Gentiles as being “sub-human,” also voiced saving Jewish soldiers’ lives at the expense of Arab civilians who must “pay a price:”

THE DEBASING OF WESTERN CULTURE by Zionist Jews is now in full-bloom. The glorification of violence by the Jewish-occupied media has acculturated Western civilization into a coma-like acceptance. Spectacles of bombs blowing up in Palestinian children’s faces shower the desensitized television viewer day after day - yet, there is hardly a murmur of protest.

Organized Jewry’s debasing of Western culture is demonstrated by their promotion of deviant sexual practices. This is evinced by the propaganda campaigns of the powerful Jewish Lobby, the Anti Defamation League (ADL). While the ADL decries “hate” against homosexuals and lesbians, their real objective is to have Congress pass their model Hate Crime Laws to prevent any criticism of Jewry’s agenda to destroy Christian civilization.

Having grown up as a Jew in an upper middle class synagogue, (I am now an Orthodox Christian), I know for a fact that most Jewish parents would be appalled to learn of their sons & daughters becoming homosexuals or lesbians. For the propagation of Jewish children is Jewry’s stake in world domination. But sexual deviancy is promoted for the “goyim” by organized Jewry in order to achieve their ultimate goal: silencing all critics of Jewry’s criminal activities. View Revealing Video Here.

In the New Testament’s Revelation of St John the Divine, the apostle is given a vision of the masses bowing before the “image of the beast.” All those who refuse to bow before the “image” are put to death, such as the Palestinians in the Gaza Strip. But deluded Zionist-Christians continue their mantra, “Who is like unto the beast? Who can make war against him?”

In today’s media, which is Jewry’s propaganda-machine, the lies of the Zionist beast have penetrated into the collective consciousness of modern man. And all those who give glory to the Zionist beast are “marked” with a numbing stupor upon their foreheads - as they assent to Jewry’s vulgarization of human life…