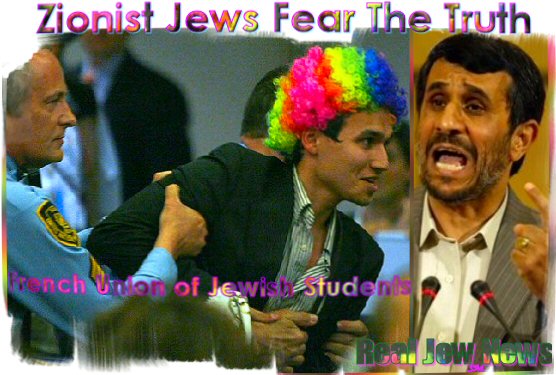 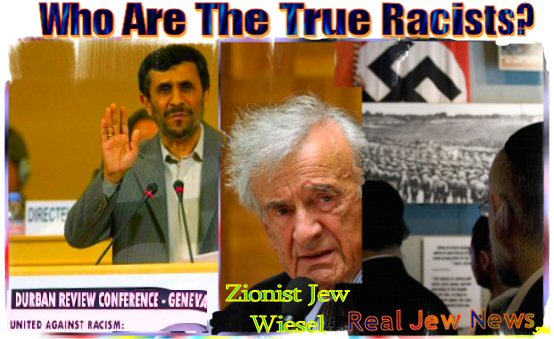 Zionist Jew Wiesel Also Delivers A Speech At The UN Conference On 4/21/09.
Wiesel Said He Failed To Understand Why Ahmadinejad Was Allowed
To Make “Anti-Semitic” Remarks During The Meeting.

(Zionist Jews Fear Freedom Of Speech.)
“JEWS ARE KICKED OUT OF UN MEETING FOR DISRUPTIVE BEHAVIOR,” reported the Associated Press on April 24, 2009.

The obnoxious Jews were reacting in their typical unseemly manner to Iran President Mahmoud Ahmadinejad’s speech at the UN Durban Conference On Racism in Geneva on April 20, 2009. in which Ahmadinejad denounced Israel as “the most cruel and repressive, racist regime in Palestine.” 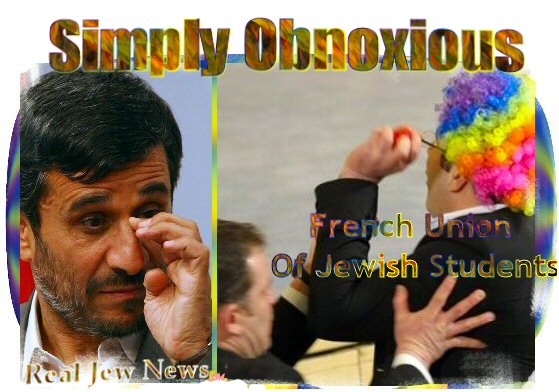 THROWING OBJECTS AT AHMADINEJAD and shouting “You are a “racist!” when he stated that “Zionists used the Holocaust as a pretext to harm the Palestinians,” the French Union of Jewish Students were ousted from the meeting while Iranian spectators cheered Ahmadinejad on. The Iranians especially cheered when Ahmadinejad said, “The Western world helped to bring to power the most cruel and repressive racist regime in Palestine.” 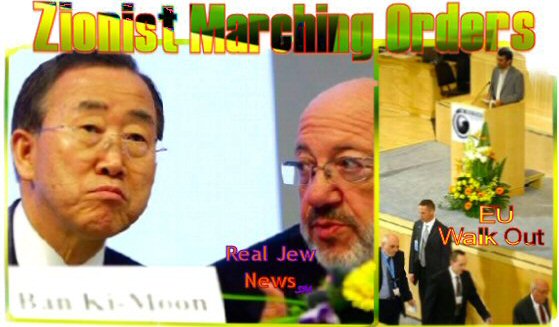 IN CONCERT WITH THE OBNOXIOUS JEWS, UN Secretary-General Ban Ki-Moon criticized Ahmadinejad, saying that he “deplored the use of the UN platform by the Iranian president to accuse, divide and even incite.”

In fact, ALL of the Zionist puppets of the world protested against Ahmadinejad’s speech. Delegates from all EU members walked out during the speech. French President Nicolas Sarkozy called it a “hateful speech.” UK Foreign Secretary David Miliband called it “offensive, inflammatory and utterly unacceptable.”

THE VATICAN ATTENDED THE CONFERENCE - and on April 19, 2009, Pope Benedict endorsed it as an “important initiative” to fight racism — sparking criticism from Rome’s chief rabbi, Riccardo Di Segni. The Pope then quickly changed his tune so as to march to the rabbi’s drum and said a day later that Ahmadinejad’s comments were “extremist and unacceptable.”

Let’s then look at excerpts from Ahmadinejad’s speech to see who is the true guilty party of “dividing and even inciting” - Ahmadinejad or Israel?

“Following World War II, the Zionists resorted to military aggression to make an entire nation homeless on the pretext of Jewish sufferings. And they sent migrants from Europe, the US, and other parts of the world in order to establish a totally racist government in the occupied Palestine. [Jews begin shouting & delegates walk out in protest].

In compensation for the consequences of racism in Europe, the West helped bring to power the most cruel and repressive, racist regime in Palestine. [Jews begin throwing objects at Ahmadinejad].

The UN Security Council helped to stabilize the Zionist occupation and supported it in the past 60 years, giving the Zionists a free hand to continue their crimes. It is all the more regrettable that a number of Western governments and the US have committed themselves to defend these racist perpetrators of genocide whilst the awakened conscience and free minded people of the world condemn aggression, brutalities and bombardments of civilians in Gaza.

What are the root causes of US attacks against Iraq or the invasion of Afghanistan? [Shouts from audience]. Was the motive behind the invasion of Iraq anything other than the mounting pressures on the part of the owners of wealth and power to expand their sphere of influence, affecting a noble culture with thousands of years of historical background, eliminating practical traits of Arab countries against the useful Zionist regime?

Almost a million Iraqis were killed and injured and a few more millions were displaced and became homeless. Wasn’t the military action against Iraq planned by the Zionists and their allies in the then US administration in complicity with the arms manufacturing companies and the owners of the wealth?

Dear friends, today the human community is facing a kind of racism which has tarnished the image of humanity in the beginning of the third millennium. World Zionism personifies racism that falsely resorts to religion to hide their hatred and ugly faces.

It is of great importance to bring into focus the political goals of those who mobilize their economic and political influence and world media to render support to the Zionist regime, and maliciously endeavor to diminish the indignity and disgrace of this regime.

Thus, efforts must be made to put an end to the abuse by Zionists and their supporters of political and international means and respect the will and aspirations of nations who oppose world Zionism. Governments must be encouraged and supported in their fights aimed at eradicating this barbaric racism and to move towards reforming the current international mechanisms.

We are all aware of the conspiracies of Zionist circles against the goals and objectives of this conference. Unfortunately, there has been literature and statements in support of Zionism and their crimes, and it is the responsibility of honorable representatives of nations to disclose these campaigns which run counter to humanitarian values and principles.” View Full Text & Video of President Ahmadinejad’s Speech Here & Here.