Kill Civilians? The Talmud Tells Me So 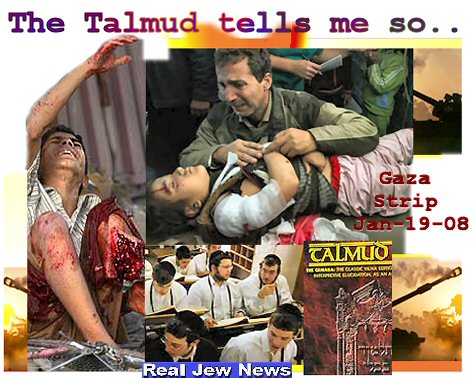 Kill Civilians? - The Talmud Tells Me So
By Brother Nathanael Kapner, Copyright 2008-2010

The Talmud teaches Jews to look down on Gentiles as inferior to them. Don’t believe the Jews when they tell you that Judaism does not teach contempt for the Gentiles. They’re lying.

I grew up as a Jew and I know how the Jews view “outsiders.” The Jews have nothing but contempt for all mankind except for themselves. The Jews use disdainful Yiddish words amongst themselves to describe the Gentiles:

“Goyim:” This is what the Jews derisively call Gentiles to indicate an “animal nature” of the Gentiles.

“Schwartza:” This is what the Jews derisively call blacks to indicate an “ape like nature” of the blacks.

~ This Yiddish word “shiksa” is derivative of the Hebrew word “shegitz” which refers to the carcass of a pig.

“Goyisha Kup:” This is what the Jews derisively call another Jew who is stupid. “Goyisha Kup” means “Stupid Gentile Brain.”

From whence comes this Jewish disdain for the Gentiles? It comes from the Talmud, a wicked book, which the Jews consider more authoritative than the Bible. 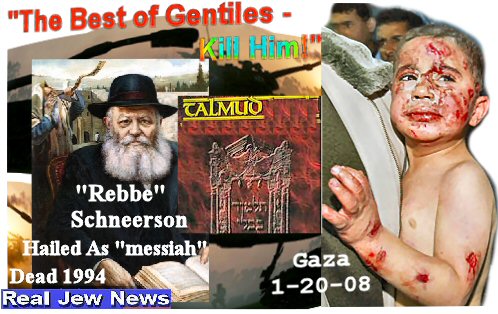 THE TALMUD TEACHES: “When it comes to a Gentile in peace times, one may harm him indirectly, for instance, by removing a ladder after he had fallen into a crevice.” (Shulkan Arukh, Yoreh De ‘ah, 158).

During the “Yom Kippur War,” when Jewish soldiers were still unclear of how to deal with Arab civilians, an exchange of letters between an Israeli soldier, “Moshe,” and a rabbi, “Rabbi Shimon Weiser,” ensued.

These letters were published in the Yearbook of one of Israel’s most prestigious religious colleges, Midrashiyyat No’am, where many leaders of Israel’s National Religious Party have been educated.

Soon the letters, under the title The Purity Of Weapons, became the standard policy of how Jews should treat Arab civilians when waging war.

Here is an excerpt dated October 1973:

— “Dear Rabbi. In one of our group’s discussions there was a debate about the ‘purity of weapons.’ [From Talmud]. We discussed whether it is permitted to kill unarmed men or even women and children.

I could not arrive at a clear decision whether Arabs should be treated like the Amalekites, meaning that one is permitted to murder them until their remembrance is blotted out from under heaven. Or perhaps one should do as in a just war in which one kills only the soldiers?” —

— “Dear Moshe. According to our sages, war for us is not a game but a vital necessity and only by this standard must we decide how to wage it. On the one hand we seem to learn that if a Jew murders a Gentile he is regarded as a murderer though no court has the right to punish him.

But we find in the very same authorities saying: ‘The best of Gentiles - kill him; the best of snakes - dash out its brains.’ According to Tosafot, though during peace time it is forbidden to kill Gentiles, in a case that occurs in wartime, it is a mitzvah [religious duty] to kill them.

According to Tractate Sanhedrin, all Gentiles during wartime are to be presumed to have evil intent. And thus the rule ‘Whoever comes to kill you, kill him first’ is to be applied. This is the rule of ‘purity of weapons’ according to Halakah. (Body of Jewish Law.)” — 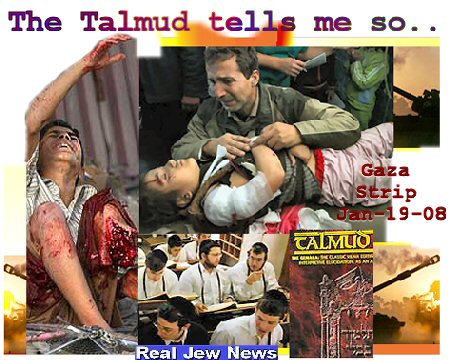 HOW CAN WE STOP THE CIVILIAN-KILLING JEWS?
Here Are 3 Options:

Option #1. Do not vote for candidates who pander to the Jews.

Option #2. Do not allow the Jewish Media to form your opinions on Israel.

Option #3. Realize that the system is so totally corrupt, run by Jews, and that only by educating our neighbors is there hope for the system to change.

As for me and my house, I am at the point where I am totally relying on the Lord Jesus Christ to get out His whip and drive the Jewish moneychangers out of every political sphere of influence which they now occupy!

And: “From Zion With Hate-Gaza Pictures Speak!” Click Here