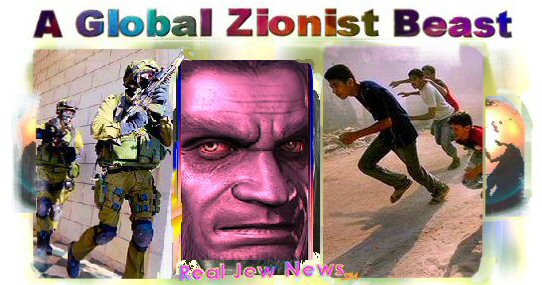 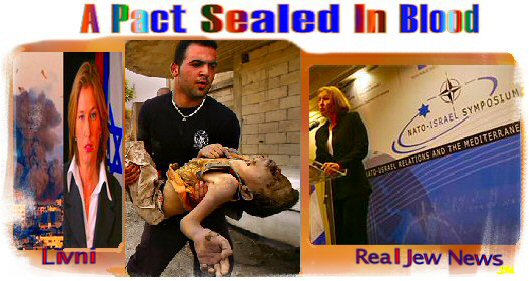 THE EUROPEAN JEWISH PRESS proudly announced in December of 2008 that NATO and the State of Israel “boosted anti-terror cooperation & military exercises.”

With the arrival of Israel’s Minister of Foreign Affairs, Tzipi Livni, to the NATO Ministerial Meeting on December 3, 2008, the NATO Council ratified the Individual Cooperation Programme (ICP), an agreement that expands the working relations between Israel and NATO in the fields of security and diplomacy.

Thus the infiltration of Israel into the affairs of the European/American infrastructure has now been solidified. Is it any wonder then that both Europe and America have soft-pedaled the massacre of civilians in Gaza now being perpetrated by the Israeli military?

The NATO Council, which groups the Foreign Ministers of the Alliance of 26 countries from North America & Europe, is in effect opening their doors for sharing privileged intelligence with Israel, increasing the number of joint NATO-Israel military exercises, connecting Israel electronically to the NATO system, and improving cooperation in the areas of armament and logistics. The ‘war games’ of NATO & Israel had begun with their initial signings of the ICP agreement in 2006, dubbed, “The Mediterranean Dialogue.”

Livni’s visit to the NATO Council followed on the heels of a speech given to the Council by the Commander-in-Chief of the IDF, General Ashkenazi, on November 20, 2008. The theme of the speech was of course, the ever-perpetual ‘war on terror,’ which is now the unifying component between NATO and the Israeli military beast. In a telling remark foreshadowing the slaughter of civilians in Gaza, Ashkenazi targeted “terrorists without uniforms:”

“Due to Israel’s proven abilities, we are an indispensable ally in the global struggle against terrorism. Israel has become a leader in areas of military prowess in fighting terrorists who are no longer in uniform.” View Entire Story Here.

The question must be asked: “Are the children, women, and UN school teachers in Gaza, whom the IDF are slaughtering by the hundreds, “terrorists no longer in uniform?” 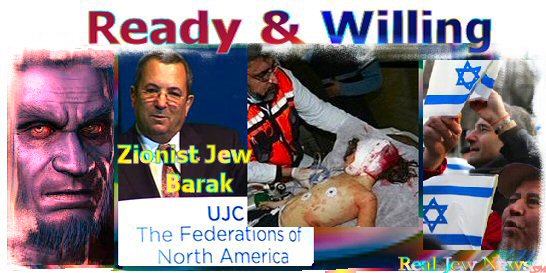 US JEWRY ‘PREPPED’ FOR GAZA SLAUGHTER

HUNDREDS OF JEWS FROM NORTH AMERICA gathered in Jerusalem on November 23, 2008, to support the Israeli Defense Force (IDF). The North American Jews joined their brothers and sisters from Israel and Europe in a conference of the General Assembly of the United Jewish Communities (UJC) held at the International Convention Center located in Jerusalem.

The Jewish participants promoted the idea of the IDF being “the army of world-wide Jewry.” Continuing the theme to unite Jewry under the banner of Israeli global militarism, the IDF published an article on their Web Site, entitled, The Army Of The Jewish People In Israel And Abroad.

During the meeting, Defense Minister Ehud Barak took the stage amidst a roaring applause. After thanking the Jewish participants for using their “influence and power” in their “respective societies abroad” to make the IDF the most powerful army in the region, Barak inspired his Zionist admirers with a cry for bloodshed in Gaza:

“There is no other army in the world like the Israeli army. Your influence and power in your societies abroad has made us the strongest army in the region. But no matter where we turn there is a threat. We are ready to respond to the threat in Gaza and we are ready to do it at the right time.” View Entire Story Here.

Now that the IDF has found the “right time” to attack Gaza during the unsettled-transition period of the US presidency - on January 6, 2009, hundreds of Zionist Jews rallied for Israel in New York City. And as US Jewry cheers them on, “ready” indeed are the Israeli terrorists in uniform to engage in ethnic cleansing of the Palestinian civilians in Gaza.

As we watch in horror of the massacre of innocent Palestinian children - “out of uniform” - thousands of even more Zionist Jews from around the world are celebrating Israel’s attack on Gaza. And Israel itself is celebrating their “coup” in the European-American military political theatre.

Yes, NATO & Israel have signed their deal. And all public posturing by the US and Europe for a cease-fire in Gaza is nothing more than a pretense and a sham…