Why Israel Should Not Exist 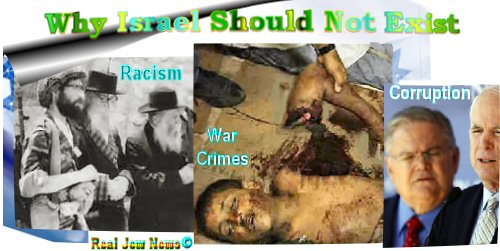 WHY ISRAEL SHOULD NOT EXIST
By Brother Nathanael Kapner, Copyright 2008-2010

Sources: The Holy Bible; The Case Against Israel, Michael Neuman; Records Of Dispossession, Michael R Fischbach; Deliberate Deceptions, Congressman Paul Findlay; Jewish Seminary - Or Potential Terrorists?, Judicial Web Site Here.
THE STATE OF ISRAEL celebrated its 60th anniversary May 13-15 2008. Upon this anniversary of Israel it is incumbent upon all Christian peoples to affirm why Israel should not exist.

Here Are 3 Reasons Why Israel Should Not Exist:

1) Israel Is Not A Fulfillment Of Biblical Prophecy: The appellation “Israel” in the Bible primarily refers to the “faithful” who make up the “Church.”

The “Church” as described by St Paul in Chapter 9 of his Epistle To The Romans is made up of the “remnant” of the Jews and the “Gentiles” of the nations. Together, as St Paul writes in his Epistle To The Ephesians, are fused into being “one new man” known as “Christians.”

2) The UN Partition Of *1947* Was Illegal: The UN awarded the Jews 55% of the land of Palestine even though their current holdings totaled only about 6% and their population was only about 35% (608,000) of all the Palestinians (1,237,000). The plan also gave the most fertile lands to the Jews but the mountainous regions to the Arabs.

In their War Of Aggression Of 1948 the Jews took additional Arab lands bringing their total holdings to about 75% of Palestine which they kept and never gave back.

Even though this additional land was illegally gained in violation of the Hague Regulations (1907) and the UN Charter (1945) which both included the basic legal principle that it is illegal to acquire territory by force, these new boundaries soon became the “official” boundaries of the new State of Israel.

3) The State Of Israel Has Created Chaos From Its Inception: War crimes, International terrorism due to the illegal “rogue state of Israel,” political corruption by the Jewish Lobby, defamation of character to all critics of Israel, Jewish racist ideology, world wide instability due to Zionist hegemony, growing Western fascism, American debt & inflation for subsidizing Israel, are additional reasons why Israel should not exist.

CRITICS OF ISRAEL MURDERED OR MALIGNED

TO CRITICIZE ISRAEL is to put one’s life and reputation at risk. A recent example is the intense maligning by Jews of two US academics, John Mearsheimer of the University of Chicago and Stephen Walt of Harvard University They are the authors of the best seller The Israel Lobby and US Foreign Policy which is highly critical of the powerful Jewish Lobby in the US.

In a recent interview of Mearsheimer & Walt by the BBC Here Walt told of the many personal attacks made against himself & Mearsheimer by the Jews:

— “There have many personal attacks on us. For example, the Washington Post [owned by Jewish Meyer-Graham family - BN] had run four separate pieces on our book and three of the four were harshly negative and a couple of them raised the Anti-Semitism charge quite explicitly - and that’s just the Washington Post.” —

JEWISH TERRORISTS ASSASSINATED Count Bernadotte on September 17 1948 Here. The day before Count Bernadotte was assassinated by the Jewish Stern Gang he submitted the following Report to the General Assembly of the UN entitled The Right of Repatriation:

The next day the Jews assassinated this truly ‘righteous Gentile!’

Let Us All Work Together To Reestablish Christianity
In The Middle East Now!