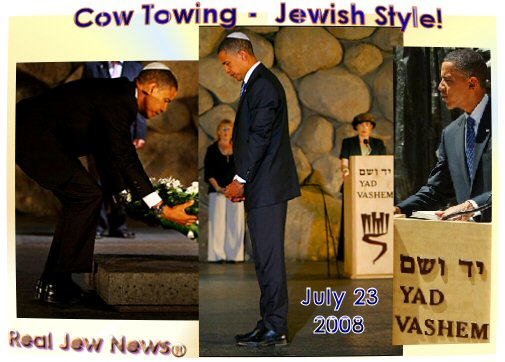 Or Send Your Contribution To:
Brother Nathanael Kapner; PO Box 547; Priest River ID 83856
E-mail: bronathanael@yahoo.com
BARACK OBAMA COW TOWS TO THE ZIONIST JEWS once again. This time it was at the Yad Vashem Holocaust Memorial in Jerusalem on July 23 2008. (See All The Photos Here).


Donning a Jewish yarmulke, (an act of apostasy for any who call themselves ‘Christian’), Obama said before he lit the Jewish eternal flame:

— “Let our children come here and know this history so they can add their voices to proclaim ‘never again.’ And may we remember those who perished who hoped and dreamed like us” — Here.

NEXT STOP:
GUSHING FOR THE JEWISH VOTE

WITH 3 JEWISH ADVISERS BY HIS SIDE Obama’s next stop was a visit to Israeli President Shimon Peres at his Presidential palace in Jerusalem.

Peres began the ‘vote for Obama if he gushes enough’ moment:

— “I want to welcome you to Jerusalem a country that has the highest regard for you as a person.

The present belongs to the young. The young should take care of the burning issues. I wish you to be a great President of the United States. That is the greatest promise for us. The future is before you. The world and so are we with you” — Here

And Obama gushes back:

— “President Peres, you have been deeply involved in this miracle of Israel that has blossomed. You have forgotten more than I will ever know.

“I am here to reaffirm my abiding commitment to Israel’s security and I hope I can serve as an effective partner as United States President” — Here.

And so - as the current saying goes: “You ain’t gonna be President unless you play ball with the Zionist Jews…”