The Evils Of Zionism 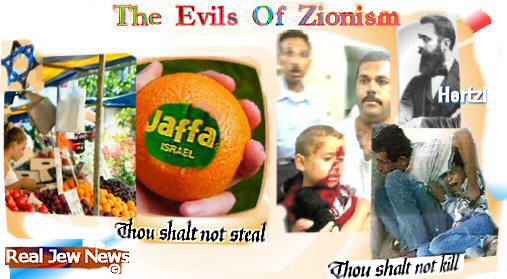 THE EVILS OF ZIONISM
By Brother Nathanael Kapner, Copyright 2008-2010

This incompatibility is spelled out by the founder of Zionism, Theodore Herzl:

— “I look upon the Zionist movement from the standpoint of Anti-Semitism which stems from economic envy, inherited prejudice, and religious intolerance. Anti-Semitism grows daily among the nations since its causes cannot be prevented.” — The Jewish State, 1896.

Here, the Arch Prophet of Zionism, Theodore Herzl, presents the Gentiles as evil predators. But the Jews he presents as innocent victims. But we all know from our own personal experiences that the Jews are anything but innocent little lambs! And our encounters with Jews prompt us to ask the question whether “Anti Semitism” is not for the most part wholly justified.

The Christian message which Zionism wars against, is completely different than the hate-affirming Zionist ideology:

— “Jesus Christ has broken down the middle wall of partition between Jews and Gentiles. His purpose was that through His death and resurrection He might make the two into one new man so making peace.” — Epistle To The Ephesians, 61 AD, St Paul. 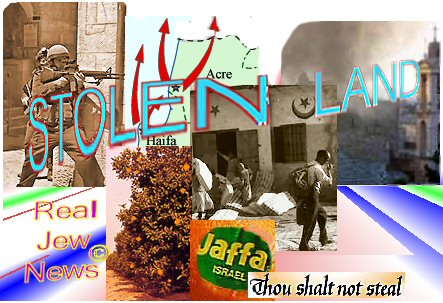 ZIONISTS STOLE THE LAND OF PALESTINE

ZIONISTS HAVE LONG MAINTAINED the myth that Palestine was uninhabited before their arrival. However, the British Foreign Secretary, Lord Curzon, writing on October 26, 1917, refutes this myth:

— “There are over a half a million Arabs in Palestine. They own the soil which belongs either to individual landowners or to village communities. They will not be content either to be expropriated for Jewish immigrants or to act merely as hewers of wood and drawers of water to the latter.” —

There were only 19 small Jewish settlements in Palestine by 1900, all of them established by Edmond de Rothschild. Some of the settlements were in the Jaffa citrus grove area whose owners were mostly Arabs.

Jaffa was the most advanced city in Palestine with its banking, fishing, manufacturing, and agriculture industries. It should be noted that the majority of all Arabic publications and newspapers in Palestine were published in Jaffa. Thus the Zionists targeted Jaffa in order to destroy the Palestinian “propaganda” arm.

There was also desecration of Christian churches in Jaffa Here. Father Deleque, a Catholic priest, reported:

— “On May 13 1948, Jewish soldiers broke down the doors of my church and robbed many precious and sacred objects. Then they threw the statues of Christ down into a nearby garden.” — 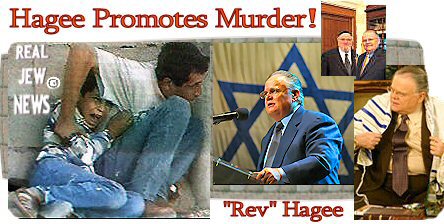 ON MARCH 11 2008, the Reverend John Hagee spoke at Rabbi Stephen S. Wise Temple in Los Angeles Here. Hagee was given several standing ovations by his Jewish audience especially when he avowed his support for the Zionist State of Israel. Hagee said:

— “I regard the founding of the State of Israel to be the most important event of the 20th Century. This ‘in-gathering’ is a necessary prelude to the rebuilding of the Temple.” —

And:
— “I do not believe that Israel ought to give up any territory it now controls.” —


The problem with Hagee and all of the Christian-Zionists is that they are making God an accomplice to Zionist racism, theft, and murder. In other words, “God is not the author of evil but of peace!”

HOW DO WE STOP ZIONIST EVIL?

2) Tell all the Zionists to stop being Anti-Semites. (Arabs are Semites.)

3) Repatriate all the Israelis, convert them to the holy Christian faith, and give the land of Palestine back to their legal owners!

Then & Only Then Can We Begin To See Peace On Earth, Goodwill Towards Men!


And: “From Zion With Hate - Gaza Pictures Speak!” Click Here

And: “Kill Civilians? The Talmud Tells Me So” Click Here