The goal of US Militarism & Zionism is to establish worldwide dominance of a US/Israeli military power in a one world government with a universal currency.

Zionist Jewish bankers, however, have no abiding loyalties to the aspirations of Gentile nations. Thus Wall Street bankers, such as NY Fed Director, Timothy Geithner, now at Treasury, could betray a US military agenda at any opportune time.

But Jewish bankers will always remain loyal to their racial elitism which has its organic center in the apartheid state of Israel.

A US Military/Israeli global presence has been growing ever since the inception of the rogue state of Israel in 1948. This proliferation of a US/Zionist military presence was recently brought to light during the Georgian crisis in August of 2008.

Both US & Israeli advisers as well as Israeli-supplied weapons were discovered amongst the Georgians in their invasion of the breakaway province of S.Ossetia.

In November of 2008, during the Mumbai ‘terrorist’ attacks, the world was made aware that Israel’s military-intelligence arm, the Mossad, has been involved with the government of India in fueling the enmity between India and Pakistan.

Once the state of Israel obtained an official status in 1948, the Mossad began infiltrating almost every country around the globe, creating wars, turmoil, and unrest without respite.

The Israeli invasion of Gaza is no exception to the ‘Mossad agenda.’ Many political analysts argue that Hamas is a Mossad created operation, complete with Mossad moles operating from within, so as to provide a pretext for the ethnic cleansing of Palestinians. 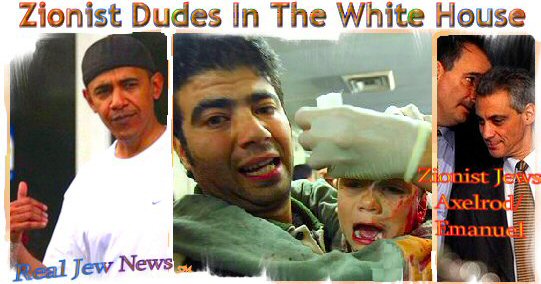 OBAMA’S JEWISH-OCCUPIED CABINET will be run by the Zionist Jew, Rahm Emanuel, acting as Chief of Staff. While serving as an Illinois Congressman, Emanuel was known as an ‘Israel-Firster.’

Emanuel’s ties to the Jewish financial world began in 1980 when he led the ousting of the Pro-Palestinian incumbent Congressman, Paul Findley.

The Jewish financial community of Chicago had selected Emanuel in 1980 as the Finance Director for Findley’s opponent, the Democrat & Jew, David Robinson, funneling millions of Jewish dollars into his campaign. Jewish money & Emanuel successfully unseated the long-serving Findley.

Since then, Emanuel, who made millions in early 2000 as a Wall Street investor, has been among the insiders of the Jewish financial establishment which works closely with the Israel Lobby.

Emanuel’s sponsor was the Zionist Jew & Wall Street financier, Bruce Wasserstein, who is now the head of Lazard Banking. With Emanuel as Chief of Staff, Jewish bankers & the Israel Lobby are now tightly knotted with the Obama administration.

ONE OF EMANUEL’S JEWISH FRIENDS within the Israel Lobby is the former Special Middle East negotiator, Dennis Ross. The Zionist Jew Ross accompanied Emanuel during Obama’s trip to Israel in July of 2008.

While campaigning in Israel, (US presidential candidates must please the Israel Lobby), president-elect Obama visited the Israeli town, Sderot, a small city on the edge of Gaza that allegedly has been hit by Hamas ‘home-style’ rockets.

The alleged shelling which resulted in the killing of only a few Israelis, culminated in Israel’s gruesome air attacks on Gaza, killing over 700 Gazans, most of them civilians.

“If somebody was sending rockets into my house where my two daughters sleep at night, I’m going to do everything in my power to stop that. And I would expect Israelis to do the same.” View Entire Story Here.

Thus far, Obama has dodged the issue of Israel’s massacre of civilians in Gaza by passing the buck to his personal aide, the Zionist Jew, David Axelrod.

In an interview on CBS’s Face The Nation on December 28, 2008, Axelrod also dodged the Gaza issue by saying: “The Bush administration has to speak for America now. Obama is not yet the nation’s president. It would not be appropriate for the president-elect to opine on these matters.” (Bush, of course, blames Hamas).

Obama’s silence on Israel’s massacre of civilians in Gaza is evidence of his puppet-status. The wealth & power of Jewry’s financial establishment dictate to Obama when to speak and when to shut up. And when Obama speaks, we can all read the Jewish Lobby’s lips…