State Of Israel: Not Biblical Prophecy!

State Of Israel: Not Biblical Prophecy! 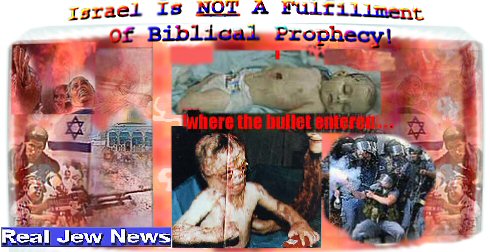 THE STATE OF ISRAEL IS NOT A FULFILLMENT OF BIBLICAL PROPHECY

JEWS & EVANGELICAL CHRISTIANS claim that the modern State of Israel is a fulfillment of Biblical prophecy. This claim evinces a shallow and errant understanding of the Bible.

The meek shall inherit the earth said Jesus Christ to His disciples. But where do we see any hint of “meekness” in the conduct of the Jews? Jesus also said, Blessed are the peacemakers. But the Jews are warmongers not peace makers. The world has experienced nothing but turmoil since the creation of Israel in 1948.

The theft of Arab lands by the Jews before and after the U.N. partition of Palestine in 1948 is evidence enough to incriminate the Jews of breaking the commandment: “Thou Shalt Not Steal.” Why make God an accomplice to thievery by saying that Israel is a fulfillment of Biblical prophecy?
See Records Of Dispossession, Fischbach

The prophet Isaiah said: The Lord shall regather Israel a second time. (Isaiah 11). Jews and Evangelicals claim that the “second time” of the return of the Jews was fulfilled in the creation of the State of Israel in 1948. But the “second time” already took place 500 years before Christ:

The 1st Return Of The Jews: The Jews were living as exiles in Egypt when Moses brought the 12 tribes back to the land of Canaan in 1445 BC.

The 2nd Return Of The Jews: The Jews were living as exiles throughout the vast Babylonian Empire which Isaiah perceived as the four corners of the world when Ezra brought only 3 tribes back to the land of Israel in 536 BC. These were the tribes of Judah, Benjamin, and Levi. The other tribes were lost forever. Just prior to 70 AD, Herod destroyed the remaining tribal records, especially those of Levi, the priestly tribe. 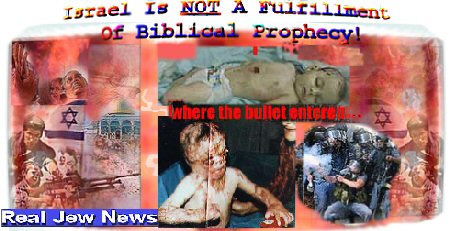 THE NEW TESTAMENT VISION OF THE CHURCH IS NORMATIVE

BEHOLD YOUR HOUSE is left unto you desolate, said Jesus Christ to the unbelieving Jews. (Matthew 23) Christ finished His censure by adding, And you will not see Me until you say, “Blessed is He that cometh in the name of the Lord”. Thus the Jews can truly fulfill Biblical prophecy by repenting of their sins and confessing the name of the Lord Jesus Christ.

The Church is the focus of the New Testament. Did not St Paul say that the Old Testament has passed away? Did not St Paul write that a new priesthood and a new law–the law of the Spirit and not the law of the letter– is the New Testament’s creed? (Hebrews 7,8). Why then are Evangelicals and Jews haphazardly pulling passages out of context from the Old Testament to prove that the racist State of Israel is Biblical?

Zionism’s aim is to establish the Jews as rulers over all the nations. The Zionists are beginning to do this through their insinuations into diplomatic circles throughout the world. This is the main reason why the State of Israel was pursued by the Jews at the turn of the 20th century. Then the rebuilding of the Temple, (the furniture is already built), will house the Jewish Anti Christ who will terrorize the entire world with Jewish domination.

Are we not already seeing foreshadowings of the Anti Christ vis a vis the Jewish disturbances of world peace? Look at the War in Iraq. Look at the Jewish neocons crying for a war against Iran. Look at the intensification of world wide Muslim terrorism because of the injustices of the Zionist state of Israel? Christians are to “reprove the works of darkness” - not support it. (Ephesians 5)

GOD’S PLAN FOR THE JEWS

THE ONLY PLAN that God has for the “enemies of the Cross and “idolaters” is that they become Christians and join the Mystical Body of Christ. St Paul wrote, God has broken down the middle wall of partition between Jews and Gentiles to make in Himself one new man, so making peace. (Ephesians 2)

But the Jews are at war with the New Testament vision for the brotherhood of man. The Jews hate Jesus Christ and are hell-bent on eradicating Christianity throughout the world. They even created a State dedicated to the denial of Jesus Christ! How then could Israel be a fulfillment of Biblical prophecy when it denies the Messiah Jesus Christ?

The racist State of Israel is “Satan’s plan for the Jews” - to wage war against the Christian Church. Jesus Christ predicted this when He said to St Peter, “I will build my Church and the gates of Hell shall not prevail against it.” Truly the Jews are a massive fortification of the “gates of hell,” desperately attempting to prevail against Christ’s Holy Church. How then could any one justify “blessing Israel” knowing of their hatred for Jesus Christ?

Let the Jews quit their racist State of Israel and their waging of war against Christ and His Church. Yes - let the Jews join the true brotherhood of man, the Mystical Body of Christ.

Then we can begin to see God’s plan for the Jews fulfilled before our very eyes. For former Jews like myself who now call themselves Christians are the true fulfillment of Biblical prophecy!