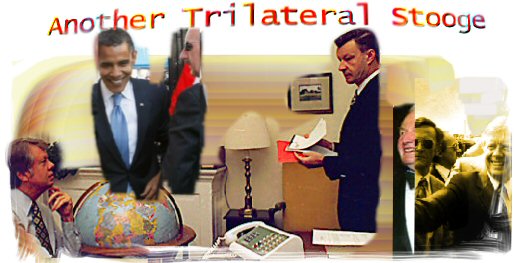 This involves party bosses, merchandising a candidate, and the hoopla surrounding on the stump campaigning.

The second component is that which takes place behind the scenes. This component is best called, “the ruling class of US politics.” This level is all about the ways in which an “elite group” controls a presidential election. Large scale covert-funding and influential networks in the spheres of banking & the media, join to manipulate the outcome of a presidential election.

The immediate aim of the Trilateral Commission, as the name suggests, is to create 3 international spheres of trade and geo-political blocs, namely, North America, Europe, & Japan. These blocs are to eventuate into a globalist economy with a single currency.

Brzezinski himself has stated that “nation-states are an antiquated form of man’s organized life.” This ideology of the Trilateral Commission has contributed to the decline of a manufacturing base in America.

Appointees of the “Trilateral blocs” are to act within the context of a “commission,” that is, an “instrument” of a governing body. What governing body would that be? A “shadow government” that manipulates the global political process, behind the scenes.

In 1976, a presidential candidate from the shadows appeared by the name of Jimmy Carter, hailed by the media as a “Washington outsider.” No - Carter was already an “insider.” Jimmy Carter was hand-picked by Rockefeller & Brzezinski who knew of him from his association with the Atlanta establishment, many of whom were Trilateralists. They supported Carter’s bid for governor of Georgia in 1971.

The Trilateral Commission, with many Jews from the media on its roster, arranged for Carter to appear on What’s My Line? in 1973. This was the beginning of a “Trilateral” making of a president. (See The Video Here.) (Carter smiles & moves just like Barky).

And now, we are witnessing once again, the Trilateralists at work, in the candidacy of Barack Obama…

ON OCTOBER 3 2008, Obama’s foreign policy adviser, Zbigniew Brzezinski, was interviewed by Tavis Smiley of the Public Broadcasting System (PBS). Brzezinski began by stating that “distinguished Republicans are now in support of Obama.”

Did Brzezinski have in mind, McCain’s handler, Joe Lieberman? This is because turncoat Lieberman came out with it on October 24 2008, saying, “I do not believe that Obama is unprepared to be president. I have a lot of respect for Senator Obama. He’s bright and eloquent.” (Looking for another job Joe?)

In the interview, the issue of a larger Afghan-Pakistan war was discussed. Brzezinski is taking the “War on Terrorism” line:

“We have to be very clear to the Pakistanis that they should be doing more to crush Al Qaeda. In Afghanistan, we’re putting in more and more troops. I agree that more troops may be necessary, but we should also politicize the problem.” View Entire Story Here.

Obeying Brzezinski’s “script,” Obama has stated the same regarding the Afghan-Pakistan war with an added “1984″ twist for America:

“We must wage the war that has to be won in Afghanistan and Pakistan. We must finish the job against Al-Qaeda. We need to engage the world to dry up support for terror and secure a safer homeland.” View Entire Story Here.