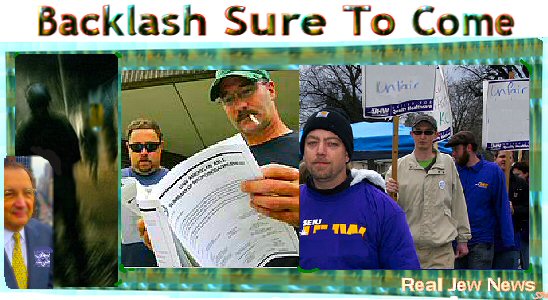 Celente, renowned for his accuracy in predicting geopolitical and economic events, emphasized once again on the nationally-syndicated Jeff Rense Program, see Rense.com, that by 2012, “the situation will be worse than the Great Depression.” The World Bank concurs with Celente, which on the same day as his interview with Rense, forecasted what it termed the “Great Depression II.”

With regard to a tax revolution, Celente says overtaxed Americans will either be fed up, not willing, or unable to pay their taxes which will ignite a battle against DC’s traitorous politicians to force the rollback of general taxes while demanding higher tax rates for those seen as paying too little.

Job riots coming to America are also a real possibility. With job losses mounting to monumental levels throughout the US, laid-off workers may soon take their frustrations to the streets. In fact, precursors of such rioting are already taking place…

“A STANDOFF CONTINUES AT A CHICAGO FACTORY as workers protest layoffs after being told their plant was being shutdown,” as reported by ABC News on December 7, 2008.

Some 250 workers at Republic Windows and Doors stayed inside their Chicago plant, in shifts, even though the company has told them that - as of December 9 2008 - their jobs no longer exist. “Chicago is a working class town. We’re gonna stand together until we win this battle,” one union leader said. Members of other unions rallied outside of the plant in support of the Republic workers occupying the factory inside.

Workers blame Bank of America for losing their jobs when told that the factory was forced to close because Bank of America cut off financing. Key Jewish leaders are concerned that the workers’ anger towards Bank of America may signal a possible nationwide backlash against Jewish control of America’s banking and economic systems. As scandal after scandal unfolds, overloaded with Jewish names, there is fear that rank and file Americans will begin to see who the majority of their controllers ultimately are.

The outrage prompted politicians, including even now-disgraced Governor Blagojevich, to jump on the anti-Bank-of-America bandwagon calling for a halt in doing business with the bank. Fifteen Chicago City Council members, concurring with Blagojevich, said they will introduce an ordinance that will require Chicago to withdraw all funds from the Bank Of America.

A similar protest occurred on August 14 2008 in St Louis where several hundred Chrysler workers protested job layoffs. 500 terminated employees, including several busloads of supporters, gathered across from Chrysler’s headquarters in Auburn Hills, St Louis, protesting the closing of the Minivan plant and the eliminating of a large shift from a nearby Chrysler truck plant. About 2,500 jobs were affected. America’s true unemployment numbers are now probably in the 20% range and the anger and resentment from these millions of now nearly hopeless citizens is bound to erupt on a major scale sooner or later.

Worldwide, similar rage and unrest is being reported routinely. Recent protests in China, some violent, and various employment-related protests throughout Europe, may foreshadow what could soon take place in America.

Furthermore, one has only to look at events like the current Greek riots, and the airport takeover in Thailand, to get the bigger picture of what could transpire in the US from the economic catastrophe enveloping the entire planet.

THE BESIEGED AMERICAN MIDDLE CLASS, millions of whom lost their jobs & homes during the recent meltdown in the US economy and mortgage market, is literally trying to survive in many cases.

Thousands are building “tent cities” and living in cars and RVs and garages throughout America. Entire families are sheltering in tents with their possessions crammed in with them or spread out on the ground outside. There is often no primary electricity, no plumbing, no drainage. Portable showers offer a chance to wash, but there is nowhere to prepare food, apart from makeshift tables in the open air, reports the BBC.

One such tent city is located forty miles east of Los Angeles on the outskirts of the middle-class suburb of Ontario. Set up in the summer of 2007 by 2 dozen victims of foreclosures, the LA tent city has grown to some 300 former LA homeowners. “It came down to “feeding my family or keeping the house,” one resident told reporters, “so I got rid of the house.”

The property he lost is nearby in Ontario, which offers a middle-class suburban dream - complete with green lawns, wide pavements, and garages big enough for two cars. Yet Ontario is in an area known as the “Inland Empire” where the rate of foreclosures is the third highest in the entire US.

Many other tent cities are springing up all across the US and North America with 5 major tent enclaves located in St Petersburg, FL, Phoenix AR, Seattle, WA, Las Vegas, NV, and Toronto, Canada. “This is just the tip of the iceberg,” reports Investors Insights.

Meanwhile, the US Congress continues to vote hundreds of billions for the US military and its continuing campaign of death and annihilation in Iraq and the burgeoning ‘war’ in Afghanistan. And let’s not forget the unstoppable flow of US tax dollars to that ‘democracy’ called Israel…now said by some to exceed one trillion dollars since the founding of that racist, apartheid ‘ally.’

While Americans are forced to live in cars and tents, our ‘loans’ to Israel (NEVER repaid) continue to fund the inhuman starvation and genocide of the Palestinian people. The current blockade of Gaza is a disgrace to the human race…but the world looks away and does nothing. Zionist Israel answers to no one.

To deal with the growing millions of unhappy, hungry and potentially unruly Americans, NorthCom command continues to ready its special operations under the heading of “Civil Disturbance Planning” against “civil unrest” in America…which could very well lead to massive martial law and full and open dictatorship.

And: Reclaiming America’s “National” Indentity From The Jews! Click Here