Hillary Clinton has been a Democrat Senator for New York since 2001 where she enjoys enthusiastic support from the Jewish Community. But a political candidate cannot rise to high office in New York unless the Jews are catered to.

A quick glance at the Web Site, Jews For Hillary, provides ample testimony that Hillary Clinton simply can’t do enough to please the Jews. (There are hundreds of Jewish “causes” and Hillary Clinton champions them all.)

Jews heartily endorsed Hillary Clinton during her re-election bid in the Democrat primary for US Senate in 2006. In a “shopping list” of political candidates running for various offices throughout New York, The Jewish Press told their readers exactly why Clinton was “good for the Jews:”

“Hillary Clinton is an important supporter of the Jewish state both in public and, more importantly, behind the scenes. She is held in the highest regard by those who regularly plead Israel’s cause in the halls of government.” View Entire Story Here.

On June 4 2008, Hillary Clinton cow-towed to the most powerful lobby in the universe, the American Israel Public Affairs Committee (AIPAC). At the conference, Clinton regurgitated the propaganda of Israel’s so called ‘democracy,’ the ‘war on terror,’ and the endless mantra of ‘Holocaust Remembrance.’ 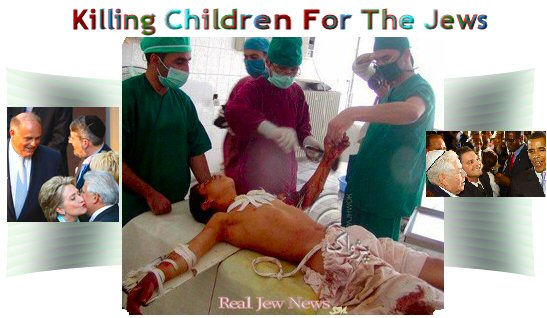 “BOLSTERING OUR EFFORTS IN AFGHANISTAN is is critical to our national security and foreign policy challenges,” wrote Hillary Clinton on her Web Site recently. Apparently, knowing that she would soon be selected as Secretary of State by Obama’s handlers, Hillary agreed to add the Afghan war-cry to insure her appointment.

In March of 2008, Clinton put forth her plan to broaden the Afghan war into Pakistan:

“Al Qaeda and the Taliban have recovered from the blows inflicted after 9/11. Afghanistan and the border regions of Pakistan have now merged into one of the most dangerous regions of the world and the most strategically important region to America.

Winning the war in Afghanistan is my highest priority since it is the forgotten front line against the war on terror. Providing security to Afghanistan cannot be accomplished without greater security on the Afghan-Pakistan border.” View Entire Story Here & Here.

Clinton is mimicking Obama’s own Afghanistan war cry. In a Face The Nation interview on July 21 2008, Obama stated that America “needs to finish the job it started in Afghanistan with more troops.” But since both Obama & Clinton are owned by the Jews, they know that war is not only “good for business” but for their political careers as well…