How Obama Will Ruin America 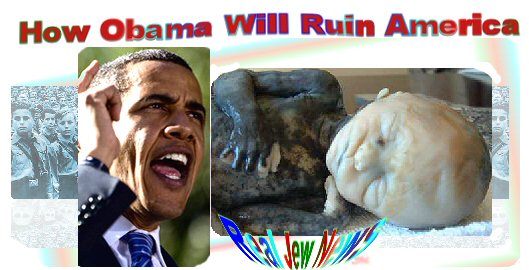 HOW OBAMA WILL RUIN AMERICA
By Brother Nathanael Kapner, Copyright 2008-2011

Obama, a clinically pathological liar, conned and mesmerized tens of millions of Americans, and multiple special interest groups, during the long and utterly contrived and stage-managed political ‘campaign’ season.

Like those of most corrupt politicians, Obama’s promises and commitments usually stemmed directly from political convenience and many of them have already been shredded. Those that will be kept will only be preserved because they are in his best interests to do so…and to please his controllers.

Obama’s handlers, the Military/Zionist Complex, maintain a solid choke hold on our nation, and have installed a mind-numbing roster of thugs, criminals, and the most corrupt career politicians and bureaucrats in America to ensure the CONTINUED acceleration of the demise of our way of life.

As has been the case under Bush Jr, and the Clintons before him, the plan remains the same: the abject weakening to the point of implosion of the moral, social, financial, and educational systems upon which America once stood rock solid and proud on the world stage.

Now, America is a frail, war-whoring, financially bankrupt shell of a country…mocked, hated and spat upon by the majority of the world’s population. This, of course, is the Zionist plan…the Protocols laid it out for all to see…a plan that will guarantee the total control of our lives by the Military/Zionist elite.

The puppet king, Obama, whose soul is owned by the Chicago Zionist Jewish machine, among other power entities - will sign into law their Executive Orders (Royal Decrees and Proclamations) so as to accomplish the final subversion of life, liberty and the pursuit of happiness in this once free and noble Republic:

Compulsory Military Service: Obama has repeatedly called for a Civilian National Security Force which will require high school students to perform 50 hours per year of civilian service as an adjunct to the US military.

Obama’s Chief of Staff, the Zionist Jew, Rahm Emanuel, is on record for promoting compulsory service for Americans ages 18 to 25. Service would include three months of basic training & civil defense preparation. Emanuel has also said he sees no reason why ALL Americans should not do national public service.

Abortion On Demand: Obama promised during his campaign that the first Bill he will sign as President is the Freedom Of Choice Act legalizing on-demand abortions nationwide. This Bill will nullify any state or local restrictions on abortion.

Hate Crime Legislation: Obama has promised to expand ‘hate crime’ legislation by passing the Matthew Shepard Act. This will be yet another nail in the coffin of America’s right to freedom of speech by targeting those Americans opposed to homosexuality & lesbianism.

Forced Hiring Of Homosexuals: Obama has promised to enact the Employment Non-Discrimination Act (ENDA) which would force employers to hire homosexuals & lesbians. Churches & religious organizations opposed to deviant sexual behavior would be prosecuted for refusing to conform to ENDA requirements.

Dictated Radio Agendas: Obama has promised to reinstitute the Fairness Doctrine which would obviously be used to target, cripple and emasculate alternative talk radio shows. The aim of the Fairness Doctrine is to ensure that coverage of controversial issues by broadcast stations be ‘balanced and fair’ & and ‘politically correct.’

The Fairness Doctrine grew out of an FCC ‘concern’ that due to the large number of applications for radio licenses - & the limited number of frequencies available - broadcasters would be mandated not to use their stations to advocate a singular perspective - but to air ALL ‘worthy’ points of view…to be determined by the FCC and powerful special interest groups, such as the Jewish Lobby, of course.

Under the Fairness Doctrine, alternative radio shows such as the popular Jeff Rense Program @ Rense.com will be forced to present views which run contrary to the broadcasters’ opinions.

A DRAMATIC SHIFT TO TOTALITARIANISM is about to take place under an Obama presidency. These pieces of legislation that Obama has promised to sign will guarantee the end of much of what remains of our historical freedom and liberty.

DO NOT BE FOOLED
OBAMA IS A FRAUD, AN INTEL CUTOUT,
A SOCK PUPPET OF THE MILITARY/ZIONIST COMPLEX